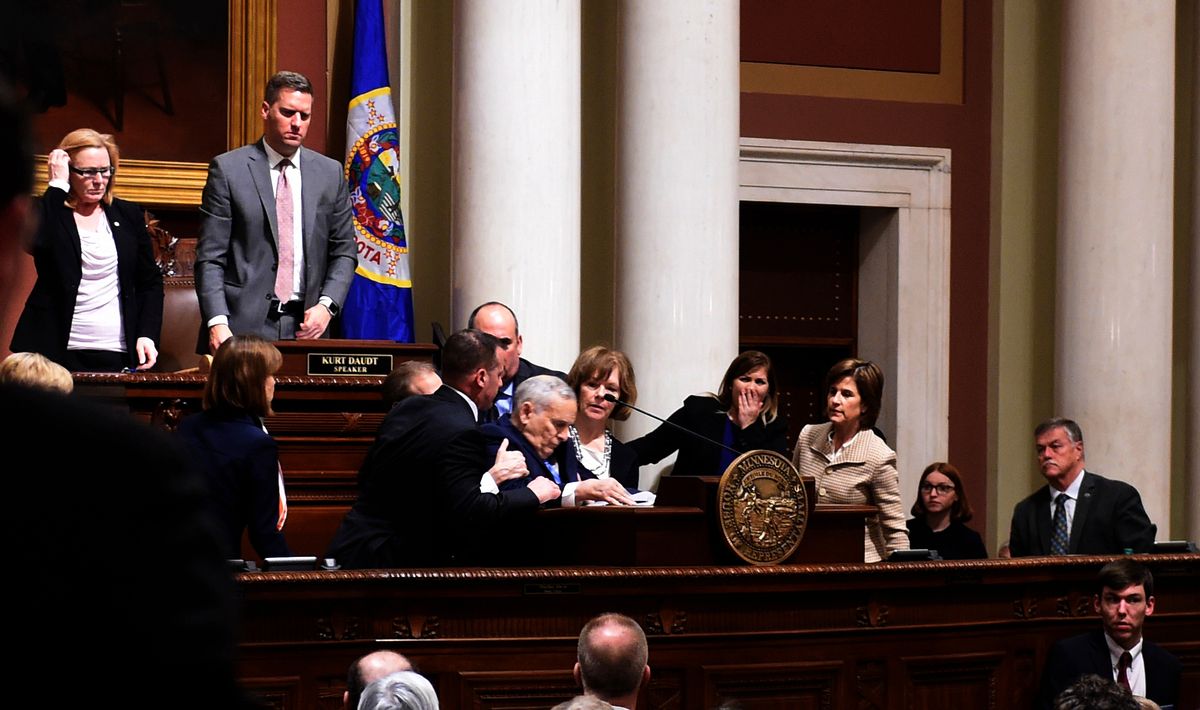 Minnesota Gov. Mark Dayton collapses while giving his annual State of the State address at the state Capitol in St. Paul, Minn., Monday, Jan. 23, 2017. The 69-year-old Democrat was helped into a back room and appeared to be conscious. (Scott Takushi/Pioneer Press via AP) (AP)
--

This story has been updated

ST. PAUL, Minn. — Minnesota Gov. Mark Dayton's top staffer said he was OK and planned to return to work Tuesday after he collapsed during his State of the State speech.

The 69-year-old Democrat struck his head on a lectern Monday night after stumbling over his words and collapsing roughly 40 minutes into the annual address. He appeared conscious as he was helped into a back room within several minutes, and later walked out of the Capitol on his own.

Dayton's chief of staff Jaime Tincher said Dayton quickly recovered and returned home to spend time with his son and grandson after a routine check by emergency medical technicians at the governor's residence in St. Paul. She said Dayton would return to the Capitol Tuesday morning for a planned event to release a detailed budget proposal.

Monday night's episode raised new questions about Dayton's health as he is about to turn 70 — his birthday is Thursday — and as he moves into his final two years in office facing a newly GOP-controlled Legislature. He is not seeking re-election.

Dayton was hospitalized in February 2016 after he fainted at a hot and crowded event. His office said at the time that he had been feeling pressure in his lower back — he had undergone elective back surgery the previous December — before he lost consciousness. Dayton spent just a day in the hospital, and said afterward he had been treated for dehydration.

In addition, a series of back and hip surgeries in recent years has left him with a permanent limp.

The governor fell about three-fourths of the way through his speech as he laid out the opening salvo in a brewing battle with Republican legislative majorities over where to bring the state after November's elections, including his proposal for a state-run public health care option for all Minnesota residents.

Dayton appeared to stumble as he first entered the House chamber, but joked it away, saying he should have attended the walkthrough. But he appeared to lose his place in his remarks roughly 40 minutes into his speech, trailing off in the middle of a sentence before pausing to take a long drink of water from a bottle he had below the lectern.

When he tried to resume his address, he spoke only a few slurred words before his shoulders appeared to shake and he crumbled behind the lectern, striking his head. A frantic voice could be heard over the microphone saying "get him to the ground. Get him to the ground please" as those around Dayton rushed to assist him.

Daudt and fellow Republican legislative leaders declined to comment on Dayton's speech, instead only offering their prayers for his health and safety.

Dayton is facing an all-Republican Legislature his final two years in office after the GOP took control of the Senate in November and added to their House majority.

Facing a unified GOP front for his final two years in office — Republicans took back control of the Senate and strengthened their House majority in November — Dayton has increasingly looked to the past as he seeks to cement his legacy.

Dayton entered office in 2011 facing a $6 billion budget deficit. After a stalemate with Republican majorities led to a 20-day government shutdown that year, he and Democrats united to control the Capitol in 2013. They raised taxes on the state's wealthiest earners, increased the minimum wage and legalized same-sex marriage.

The state has posted several years of surpluses, and the governor has pointed to that financial stability as a hallmark of his six years in office, insisting he'll safeguard against a return to painful budget shortfalls.

"In 2010, I campaigned for governor on the promise of a better Minnesota. Now, and two years from now, I expect to be judged by you, the people of Minnesota, on how well I have kept that promise," he said during his remarks. "In my first inaugural address, I promised that I would 'clean up the state's financial mess.' I have kept my word."

UPDATE (2:51 p.m.) Minnesota Gov. Mark Dayton says he will finish his term despite being diagnosed with prostate cancer.