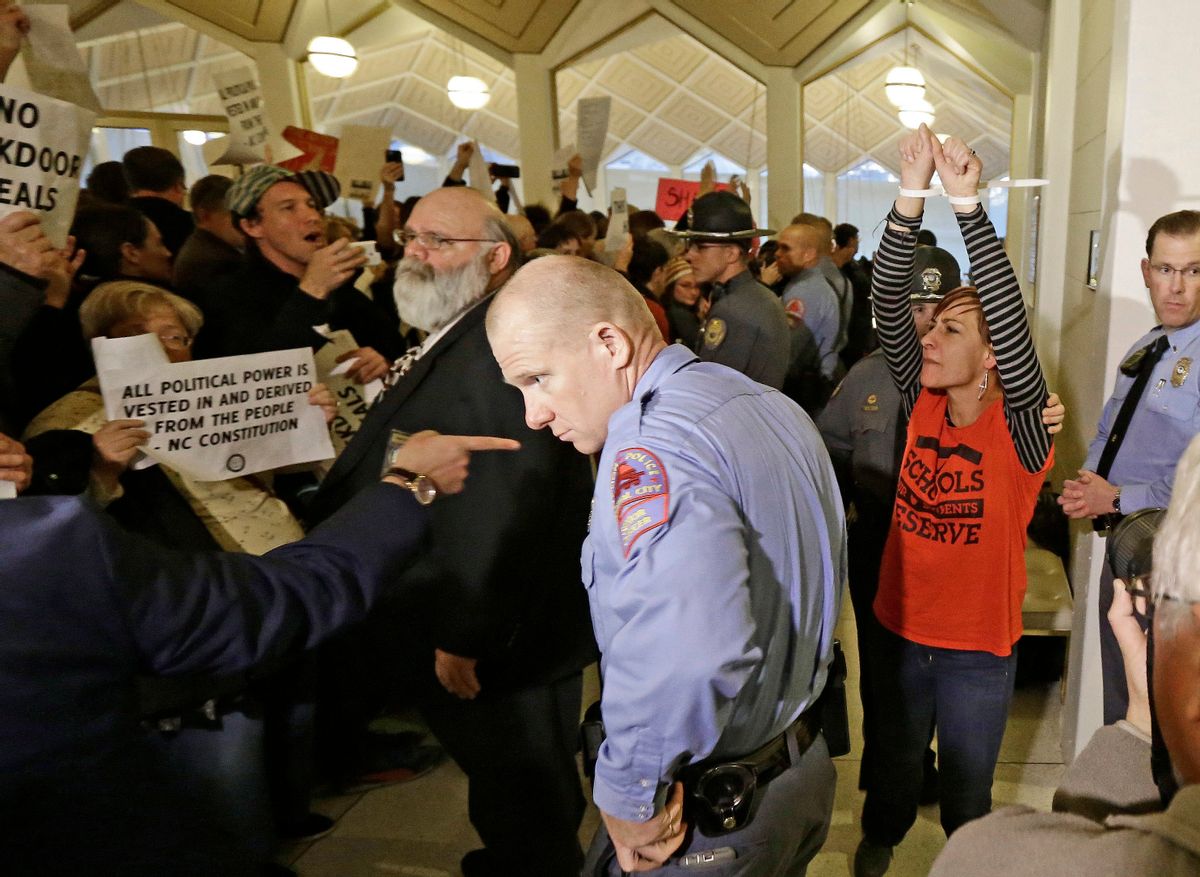 A protestor, right, is handcuffed and removed from the House gallery as demonstrators interrupted a special session at the North Carolina Legislature in Raleigh, N.C., Thursday, Dec. 15, 2016. North Carolina Gov.-elect Roy Cooper said Thursday he's ready to fight in court against Republican legislation moving through the surprise General Assembly session that would undercut his powers as he takes office next month. (AP Photo/Gerry Broome) (AP)
--

After a video posted on Facebook showed a group of people shouting epithets at former North Carolina Gov. Pat McCrory during his trip to D.C. for inaugural weekend, a state senator from North Carolina has proposed legislation that would insulate public officials from verbal criticism.

Sen. Dan Bishop of Charlotte told a Raleigh newspaper he plans on introducing legislation that would "make it a crime to threaten, intimidate, or retaliate against a present or former North Carolina official in the course of, on account of, the performance of his or her duties."

Bishop, one of the sponsors of House Bill 2, the controversial "bathroom bill" that ultimately caused McCrory to lose his reelection, said that "lines are being crossed."

Bishop reportedly called the group of people yelling at McCrory in the video "a chanting mob" and "ubiquitous leftist rioters." He even suggested that the people maybe have "stalked him." Bishop argued that such behavior warrants a five-year prison sentence.

"This is dangerous," Bishop wrote in an email to The News & Observer. "Jim Hunt, Bev Purdue and other governors never faced riotous mobs in their post-service, private lives, without personal security."

The North Carolina ACLU wrote in an email statement that the law would limit citizens' rights.

"People's right to criticize politicians — whether in a newspaper, at a meeting, or on a public street — is the very heart of the First Amendment protects," the statement said. "Everyone deserves protection from violence, but politicians who run for and serve in public office shouldn’t get special treatment to shield them from criticism. Any attempt to criminalize peaceful political speech would violate the Constitution and our country’s proud tradition of free speech for all.”

Watch the video that led to the law below: