Trump's war on Medicaid: Our new president wants to gut a critical program for the poor 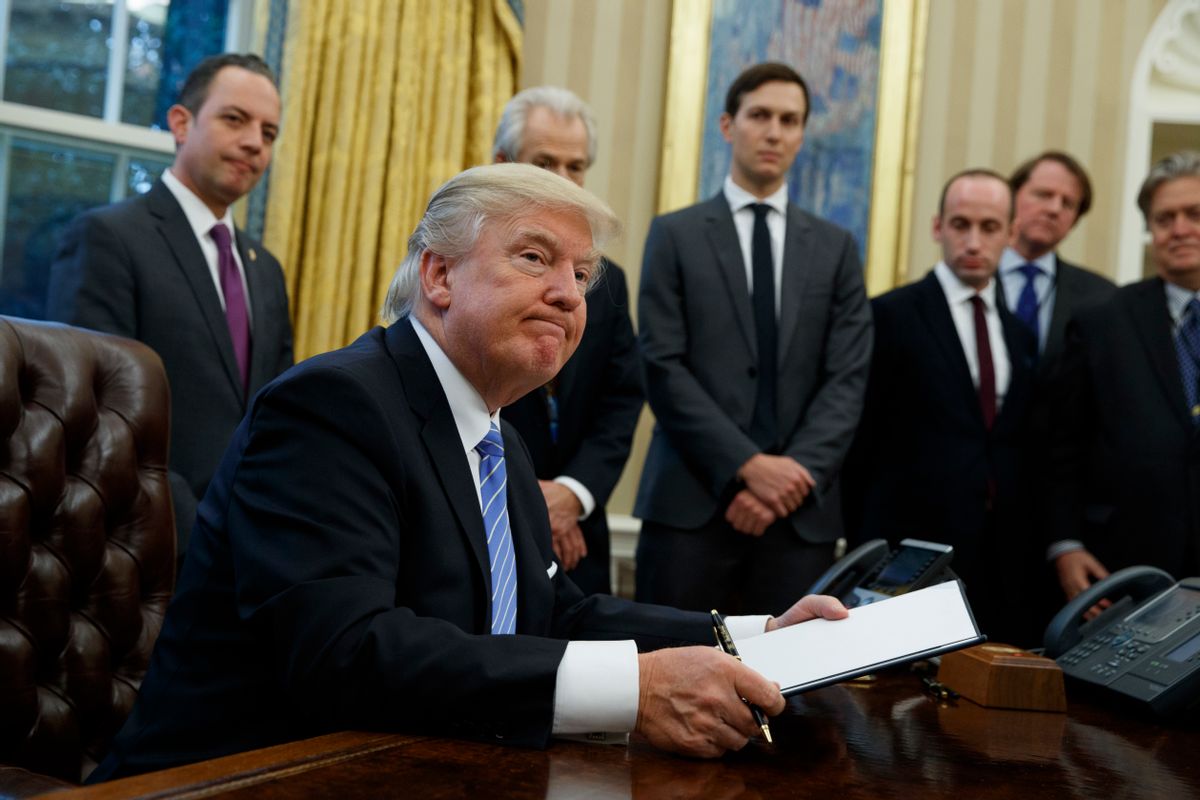 President Donald Trump looks up after signing the final of three executive orders, Monday, Jan. 23, 2017, in the Oval Office of the White House in Washington. (AP Photo/Evan Vucci) (AP/Evan Vucci)
--

For all his posturing on populism and sticking up for the “forgotten men and women” of the United States, President Donald Trump is no friend to low-income Americans. Over the first days of his administration, he has lined up some policies that, if implemented, are likely to measurably worsen the lives of poor people in this country. Chief among them thus far is his plan for Medicaid, which will be hacked up, shriveled and left to rot if the new president has his way.

Trump campaigned, somewhat perversely, as a champion of social programs — largely meaning Social Security and Medicare — but Medicaid has long been a target of his. Kellyanne Conway, a senior adviser to the president, confirmed over the weekend that Trump’s plan for the health care system after he tears apart the Affordable Care Act (and its expansion of Medicaid coverage) is to change Medicaid's funding structure.

Specifically, the program will be given the block grant treatment, meaning that federal funding for the program will be distributed to the states in one big annual chunk, leaving the states to manage that money as they see fit. This has long been part of Trump’s plan for reforming the health care system, and it meshes well with the health care visions of conservative politicians like House Speaker Paul Ryan. There is a rationale for this, of sorts. As Conway put it, switching to block grants instead of direct federal management will make sure that “those who are closest to the people in need” will run the program.

This need for “flexibility” and “efficiency” has long been the core argument for block grants. But states already possess a good deal of flexibility when it comes to Medicaid — what populations and procedures to cover and which eligibility thresholds to maintain are all determined (to varying degrees) by state governments. The added “flexibility” that would come from funding the program through block grant can mean a lot of things, but it’s generally presumed to mean more stringent means testing, forcing recipients to pay premiums for their care, reducing benefits and setting up other barriers to eligibility.

Even as things now stand, the vast differences in how different states administer their Medicaid programs can force low-income people to make difficult choices, such as moving from a stingy red state like Texas to a generous blue state like New York in order to gain access to lifesaving treatments.

More important, transforming Medicaid into a program funded through block grants changes its purpose. Right now, Medicaid exists to provide access to medical care for people who can’t otherwise afford it, and its funding structure enables the program to respond to shifting economic conditions. Changing the funding structure to block grants means that Medicaid will become less about providing access to health care and more about finding ways to manage costs. “Because a Medicaid block grant is explicitly intended to produce significant federal budgetary savings,” the Center for Budget and Policy Priorities noted, “block grants are designed in ways that give states considerably less federal funding each year than they would receive under the current financing system.”

Simply put, the amount of federal funding going into this social insurance program would become disconnected from actual and evolving needs. Block grants would reduce the number of people enrolled in Medicaid, and it would do so without servicing the ongoing health care needs of the people who are kicked off the rolls. That’s exactly what happened with the Temporary Assistance for Needy Families program, the block grant-funded program that emerged from the 1996 “welfare reform” push.

The inevitable end result of this will be that more low-income people are unable to gain access to health care. And when we’re talking about Medicaid beneficiaries, we’re talking mainly about kids, people with disabilities and elderly individuals, who together make up 64 percent of total Medicaid enrollees and account for 77 percent of Medicaid spending. Those are the people who will suffer the most from Trump’s plan to save money for Medicaid by giving state governments both means and incentive to kick needy people out of the program.