Archie goes dark: The CW's "Riverdale" serves up a classic comic book character with a twist

Based on the "Archie" comics, the new drama paints the classic small town as a hotbed of illicit romance and murder 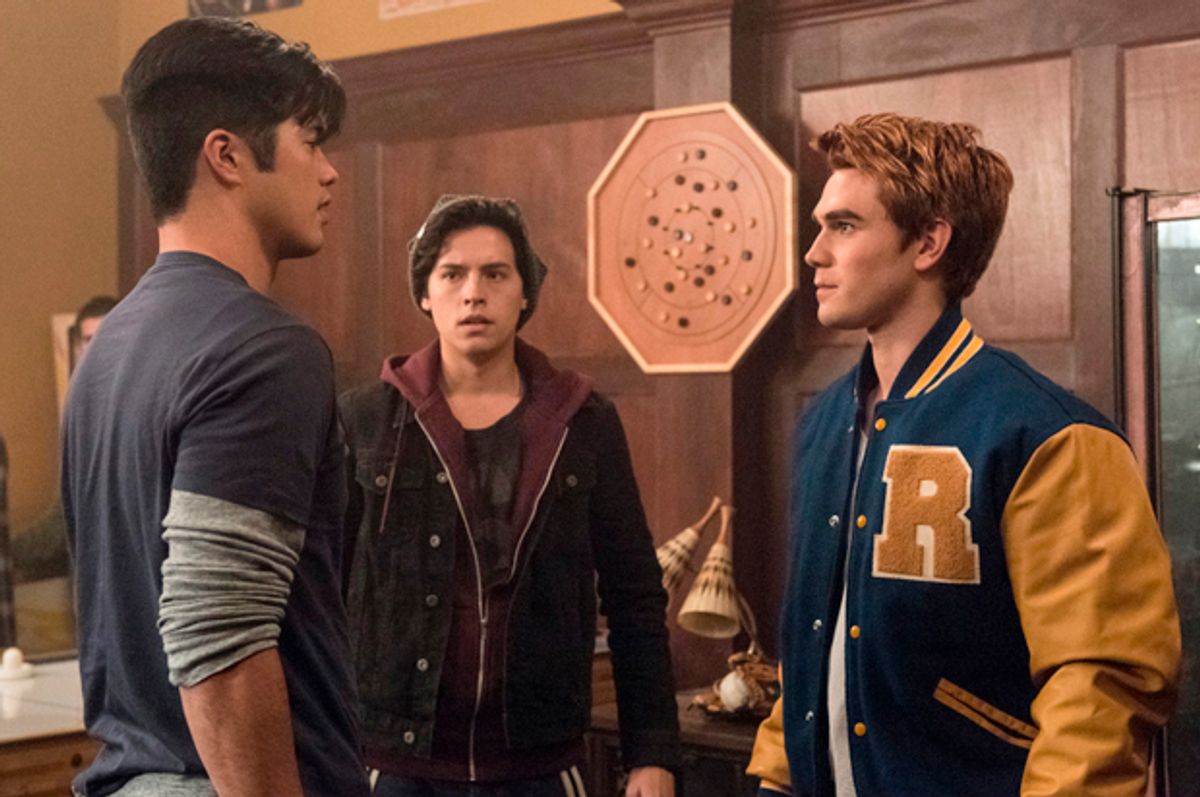 Riverdale, home to those iconic comic book characters Archie, Betty, Veronica and Jughead, may be one of the most resilient burgs in popular culture. Established in 1941, Riverdale is the prototypical American small town — or rather, the pristine reflection of its manufactured ideal.

The place exists outside of time and true reality, but regardless of the era when someone drops in on the Archie-verse, certain core elements are immutable. Pop’s Chock’Lit Shoppe remains the town’s social center, and there are designated make-out spots along the banks of the Sweetwater River.

At the center of it all is that affable redhead Archie Andrews — good-natured, earnest if not academically accomplished — eternally caught between two girlfriends constantly competing for his attention.

The CW’s take on the Archie universe, “Riverdale,” adheres to the basics of these archetypes while twisting them in a deliciously sinister fashion. Much of the action that takes place in the premiere, airing Thursday at 9 p.m., follows the central relationship’s 76-year-old design while tossing in a few saucy modifications, including inferred twincest, a student-teacher relationship and a parent’s ties to organized crime — none of which are out of bounds in the franchise’s contemporary incarnation.

In case you haven’t kept up with “Archie,” Riverdale has been ground zero for a zombie apocalypse, among other things. In the comic book, Archie has died — at the hands of the Predator. The teens have been superheroes and jammed out with The Ramones. Not only will Archie, Betty, Veronica, Kevin and Jughead survive The CW; they belong there.

Remember, past CW seasons gave us “Gossip Girl” and “Veronica Mars,” critically lauded series offering disparate yet thoughtful takes on adolescence. You could say that “Riverdale” continues in this tradition. Actually, though, it’s an example of the genre coming full circle. For what were the “Archie” comics if not a youngster’s indoctrination into the realm of soap operas? And what would teen dramas look like if “Archie” had never existed? Betty Cooper begat the television version of “Gossip Girl” angst queen Serena van der Woodsen and every blonde to arrive before her, a lineage stretching back to Kelly Taylor of Fox’s “Beverly Hills, 90210” and further still.

“The O.C.” gave Fox viewers the lovably shallow Summer Roberts. Freeform’s “Pretty Little Liars” yielded the inquisitive, mature-beyond-her-years Aria. Both were definitely Veronicas. “Archie” might as well be the ur-teen soap . “Riverdale” series creator Roberto Aguirre-Sacasa built the series upon that notion by constantly winking at the audience’s persistent affection for this kind of show, particularly Gen Xers weaned on Aaron Spelling-produced sudsers.

“Beverly Hills, 90210” alumnus and former teen heartthrob Luke Perry is a series regular, as is Mädchen Amick (“Twin Peaks”). Robin Givens (“Head of the Class” ) and Skeet Ulrich (“The Craft”) also have recurring roles. Today they’re the parents, which is kind of sobering to those of us who watched them when we were teens, but at least their kids actually behave like actual adolescents — to a point.

Archie (K.J. Apa), a blaringly unnatural redhead, remains a decent, hardworking high school sophomore with musical aspirations. Following a summer spent working on construction jobs to help out his father Fred (Perry), he now has the six-pack abs of a jock.

This wouldn’t be worth noting except that it’s the very first trait revealed about Archie, delivered to us courtesy of Riverdale’s out-and-proud gay teen Kevin Keller (Casey Cott) while he’s hanging out with Betty Cooper (Lili Reinhart). “Riverdale” makes a point of capitalizing on Apa’s impressive physique, although it’s not compensating for any weakness in his portrayal. To those of us possessing a rudimentary familiarity with Archie, he isn’t all that complicated of a fellow. Apa makes him watchable nonetheless, even if he isn’t the most captivating figure in the show.

Archie’s storyline is significantly more interesting thanks to Reinhart’s Betty, a top student who favors modest sweaters and the color pink. Reinhart exudes a vulnerability that immediately grants the character more depth than her two-dimensional counterpart. Pairing her with Amick allows the “Twin Peaks” veteran to careen into “Mommie Dearest” territory as Betty’s controlling mother Alice.

But “Riverdale” doesn’t truly pull out of the driveway until Archie and Betty meet Veronica Lodge (Camila Mendes), a wealthy New Yorker whose mother Hermione (Marisol Nichols) brings her to Riverdale so they can start their lives over and escape a scandal. The meet-cute is cheesy — Veronica strolls in slo-mo, coolly pulling back the hood of her black cape and smiling — but it’s sophisticated cheese that goes well with this setup.

The other best-known character in the “Archie” quartet, Jughead Jones (Cole Sprouse, doing his enigmatic and moody bit), is a brooding writer, narrating the drama by reading passages from the true crime story he’s working on. (Try to give Jughead’s cornball dialogue a pass; he may be aiming for a James Patterson vibe, but the voiceover sounds closer to E.L. James being read under the influence of Klonopin.)

Jughead, along with everyone else, displays an intellectual savvy more tailored to impress older “Riverdale” viewers than realistically approximate teen conversation. The young scribe has aspirations to become the next Truman Capote; Kevin jokes that he’s going for the look of a “pre-accident Montgomery Clift.” Veronica casually references Oscar Wilde, and her mother cracks a joke about imitating “Mildred Pierce.”

“Who? What?” millennials may ask, and if they don’t, I salute them. Never mind if those references zoom overhead, though. They’re merely cerebral flourishes on a series aspiring to be more than a guilty pleasure.

The inspiration for Jughead’s book is the mysterious disappearance of Jason Blossom, seen setting out in a rowboat with his pompous twin sister Cheryl Blossom (Madelaine Petsch) on the Fourth of July as the series opens. Painstaking camerawork and design elements in this scene and others make the drama’s exposition unnaturally mesmerizing; Cheryl and Jason wear blindingly white matching outfits that set off their glossy ginger hair, and the ethereal light on the water is too perfect. The director of photography obviously ripped a page directly out of David Lynch’s playbook.

Jason never returns, leaving Cheryl melodramatically bereft. When his body washes ashore not long after the fall semester kicks off, Riverdale is shaken to its core. Cheryl, on the other hand, exploits the tragedy to the fullest, using her twin’s murder to elicit sympathy even as she dictatorially wields her power over the school.

The murder of innocence is a vintage hook in the oeuvre, and one that typically arcs across an entire season, if not longer. Given that “Riverdale” borrows much of its tone from “Twin Peaks,” a seminal series that yielded the important lesson that sometimes a tawdry homicide can be solved too soon, its safe to expect Jason’s murderer won’t be unmasked at any point soon.

“Riverdale” has many more immediate scandals to contend with, foremost being Archie’s secret affair with Miss Grundy (Sarah Habel), the seemingly mousy music teacher who sports Lolita-esque heart-shaped sunglasses in her off-hours.

This subplot helps to set up the love triangle between Archie, Betty and Veronica as well as cements Betty and Veronica's turbulent friendship. It’s an important establishing element of this universe, the extensive shaping of which weakens the first two episodes.

Where “Riverdale” begins to realize its potential is in its highly enjoyable third episode, embroiling Riverdale High’s female students in a slut-shaming scandal and hinting at a menace sleeping within Betty’s pure heart. Reinhart and Mendes’ sparkling chemistry fully effectuates in that hour, which also grants greater sobriety to Petsch’s unrelentingly bitchy Cheryl.

Shannon Purser makes her first appearance in that episode as Ethel Muggs, and her casting in this may simply be another role on a lengthening résumé or it could be an intentional pop culture tip of the hat. Is it possible to launch a self-aware teen drama without including Barb from “Stranger Things”?

There’s a lot to appreciate about these early episodes of “Riverdale,” if not outright adore. There’s also tremendous space for improvement, which is true of most series tasked with servicing a large ensemble. “Riverdale” has an extra hurdle, in that its writers are bringing to life a slew of characters whose backstories have been tinkered with for nearly eight decades.

Aguirre-Sacasa is acutely conscious of this. In addition to creating “Riverdale,” he also serves as the chief creative officer of Archie Comic Publications. Thus it’s understandable that the showrunner would want to capitalize on the comic’s musical successes, realized here through the inclusion of Josie and the Pussycats, Riverdale High’s house band consisting of three black women.

The problem is that Josie McCoy (Ashleigh Murray) has no lines or direct connection to the main plot. She and the band appear only when the kids need sisters with voices or to deliver a fiery speech about the difficulties they face as minorities in a small town. (How their rendition of  “Sugar Sugar” evokes that struggle is unclear.)

“Riverdale” gets points for making an effort to feature a diverse cast from the start, something many other prime-time soaps have failed to do. That includes the decision to make Veronica and Hermione Latinas, a detail the writers don't work with the frothy zeal given to Josie's speeches. They're just women — dames, truly — who we want to know more intimately. The cringe-worthy Pussycat situation, in contrast, desperately needs better writing.

“Archie” is nothing if not pliable, however. There’s always room to reshape this world, always an opportunity to hit the reset button. “Riverdale” provides enough fun, pulpy mystery for us to drift along with its weird courtship, at least for a while, and see where the current takes us.