Can Democrats appeal to all races? Internal dispute on race heats up in DNC contest

Energize voters of color or reach out to working-class whites? One leading candidate says it's a "false choice" 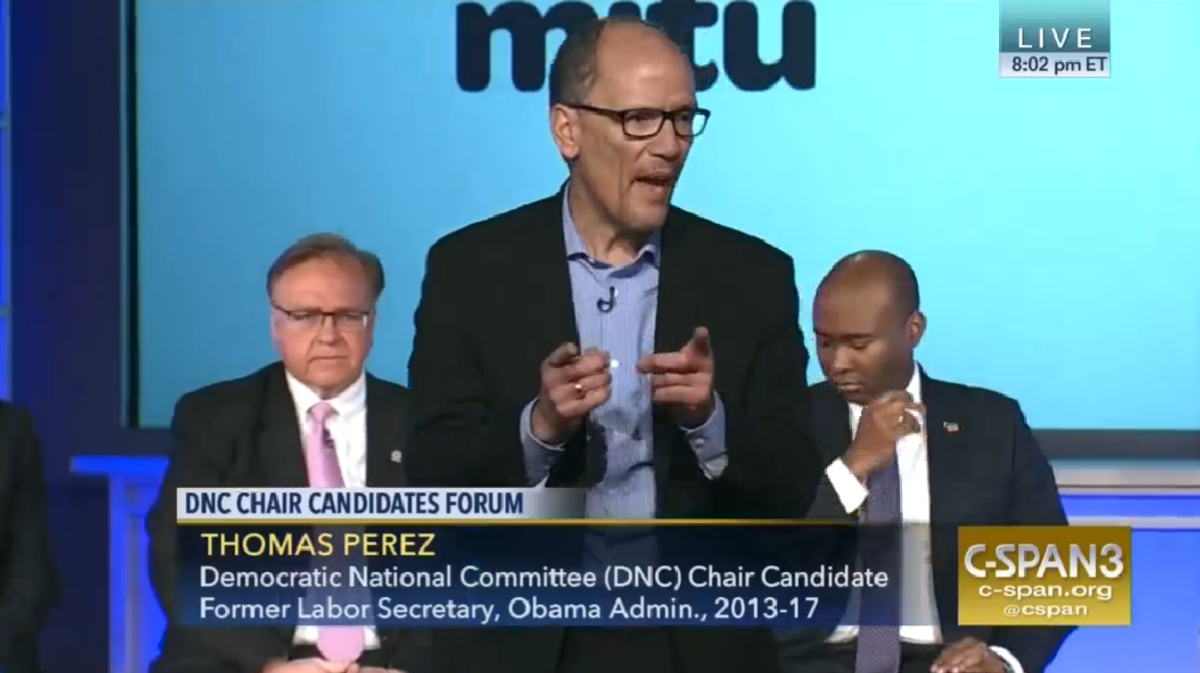 Former secretary of labor Tom Perez speaks at a debate held for candidates seeking to lead the Democratic National Committee. The event was sponsored by the group Democracy in Color and held Jan. 23, 2017. (Image via screenshot)
--

Since Hillary Clinton’s unexpected defeat in November, Democrats have been struggling with what needs to be done to rebuild their party. For the most part, that discussion has been muted in public — except when it comes to the contest over who will head up the Democratic National Committee.

Central to that contest have been questions of race. A divide has emerged between people who want the party to do more to energize members of minority groups — primarily African-Americans and Latinos, who are less likely to vote than white people — and those who feel the party has ignored the concerns of lower- and middle-income white voters.

At a debate forum held Monday night sponsored by the group Democracy in Color, the seven major candidates for chair of the Democratic National Committee held forth on race and the party, with several claiming that a competent party would be able to reach out to people of all races.

“It’s a false choice to say we’ll go to one community or the other,” said Tom Perez, who until last week was secretary of labor under Barack Obama. “We didn’t make house calls.”

Pete Buttigieg, who is the mayor of South Bend, Indiana, argued that Democrats have limited themselves by talking to various groups about just the issues that particularly affect them.

Rep. Keith Ellison of Minnesota, who is widely seen as one of two leading candidates (along with Perez), said Democratic leaders spent too much money on television ads in swing states.

“The Democratic Party ignores the blue states and the red states and only goes to the swing states and then they target them with just TV ads,” Ellison said, advocating that the party spend more of its money on local organizing and on black and Hispanic media.

Ellison was one of several candidates to criticize the party for spending too much money on television commercials. The issue of how Democrats can improve turnout among citizens who don’t normally vote divided the candidates to some degree.

“The DNC did a piss-poor job of engaging young people of color,” she said. She also faulted the party for not focusing more of its public messaging on “communicating intersectionality.”

“Sexism, racism and homophobia are all connected,” said Greene, who's worried that Democrats may be overcompensating for failures to reach blue-collar white voters in swing states.

Buttigieg maintained that the party had stopped focusing on urging people to vote for Democrats and instead had prioritized convincing them to vote against Republicans. He said that ideological centrism wasn’t necessary but better communication was.

“It doesn’t matter where you put your media spending if you don’t talk about your values,” Buttigieg said, adding that Democrats have been reluctant to talk about how progressive values promote freedom.

Activists involved in Black Lives Matter were also a significant topic of discussion. Ellison said that Democrats needed to realize that the movement began in part out of frustration with their party's perceived ineffectiveness.

“Black Lives Matter cropped up because of mass incarceration and Trayvon Martin’s execution,” he said, referring to the Florida teenager who was killed in a confrontation in 2012.

Ellison said that activists involved in the movement needed to become more involved in politics because otherwise they wouldn't achieve results: “The demonstration has to result in legislation or you’re going to get a lot of frustration.”

Two of the white candidates spoke more starkly about race than their black or Hispanic rivals. One even suggested that white people should be silent in discussions about race.

“I’m a white woman; I don’t get it,” said Sally Boynton Brown, the executive director of the Idaho Democratic Party. “My job is to listen and to be a voice and to shut down other white people when they want to interrupt — when they want to say, ‘Oh no, I'm not prejudiced; I'm a Democrat.'”

Brown claimed that Democratic leaders “need to know how to shut their mouths if they’re white.”

Another candidate, New Hampshire Democratic Party chairman Raymond Buckley, related a story about a call he received from his black niece the day after Donald Trump was elected president, asking him to find a way to get her out of the country.

“It was a soul-crushing experience for me,” he said. “Until all of America understands the fear that is out there, that we are seeing happen to African-American lives, we’ve got a huge problem.”

Jaime Harrison, chairman of the South Carolina Democratic Party, needled his rivals slightly,  suggesting they were latecomers to the issues of race and law enforcement.

“I’ve been a black man all my life in South Carolina,” he said. “For a lot of you guys, this is new/”

He further added, “African-Americans are the most loyal constituency within the Democratic Party. But we have to stand up and ask this party, ‘You want us? Well you have to fight for us.’”

Monday night’s debate was the ninth debate among the candidates for the DNC office. Asked afterward why the candidates were participating in so many debates, Buckley replied, “People are inviting us and we’re all showing up.”

There was no discussion on Monday night about the contentious 2016 Democratic primary race between Clinton and Sen. Bernie Sanders — something the party appears eager to put behind it. Ellison was perhaps Sanders' most prominent supporter in Congress but he has been endorsed by Senate Minority Leader Chuck Schumer, who is close to Clinton.

At a debate held last week, none of the candidates agreed to the statement that the DNC had “put its thumb on the scale” in favor of Clinton.