"I'm begging FEMA for boots on the ground": Donald Trump leaves GOP leaders begging for aid after deadly storms in the South 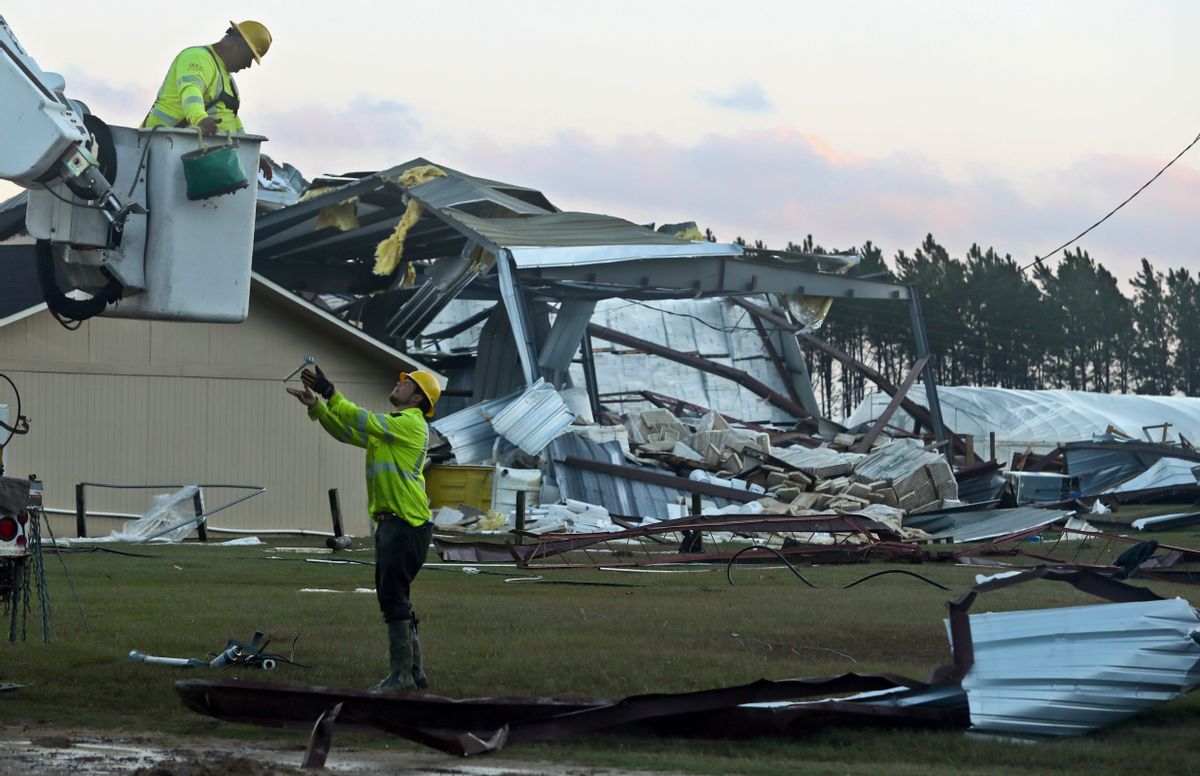 Nearly two dozen people have been confirmed dead in the aftermath of massive storms that hit three Southern states over the weekend. And while President Donald Trump was signing an executive order freezing hiring for all federal employees during his first "day of action," the governors of affected red states have been begging for assistance from the federal government.

As four severe storms moved south from Georgia and Mississippi into the Florida Panhandle, 50 unconfirmed tornadoes have been reported from Thursday to Sunday, according to the Weather Channel. Experts believe weeks of cleanup will be required, but so far, the Trump administration has all but ignored the crisis.

NBC News reported that Mississippi Gov. Phil Bryant sent a letter to Trump pleading for help after four people were killed in his state and more than 1,000 homes were damaged in one county alone. Georgia Gov. Nathan Deal expanded a state of emergency in his state — where 15 people have been confirmed dead — from seven counties to 16 on Monday afternoon and extended the order through Jan. 30.

Chris Cohilas, Georgia's Dougherty County commission chairman, said he was "begging FEMA for boots on the ground" and "asking President Trump to cut through the red tape and get people on the damned ground here."

The area was still recovering from a devastating Jan. 2 tornado hat left a trail of damage in excess of $50 million when it were hit early Sunday with another brutal storm. Dougherty County officials told The Atlanta Journal-Constitution that they felt abandoned by FEMA after the Jan. 2 tornado, and that Sunday’s storms — which left four in the county dead — only made matters worse.

Deal’s office said it was waiting to hear back from FEMA, but the governor said he’s confident that President Trump and his administration would respond soon. Deal said he spoke with Trump over the phone about the storms. Trump also reportedly called Florida Gov. Rick Scott to express his condolences after offering public statements on the storm during his full day in office on Tuesday. Still, little action has come of Trump's talk, so far.

"The tornadoes were vicious and powerful and strong, and they suffered greatly," Trump said Sunday, according to The Hill. "So we'll be helping out.”

In an email to The Atlanta Journal-Constitution, a Federal Emergency Management Agency spokesman said the agency had working on a request to deal with a first round of storms that hit southern Georgia in early January. But it seems the Trump administration has not begun to coordinate a response for the latest round of storms that struck during the inaugural celebration.

A decade ago, the Federal Emergency Management Agency was in shambles. The agency, created by executive order in 1979, was plagued by its disastrously incompetent response to Hurricane Katrina. Michael Brown, the disgraced head of FEMA appointed by President George W. Bush, was a political fundraiser with no emergency preparedness experience who was replaced as on-site manager of the disaster after only one week.

Former president Obama visited FEMA for briefings every year and even held a Cabinet meeting there. During the Obama administration, 910 disaster declarations had been competently handled — far more than any FEMA director in history. Under FEMA director Craig Fugate and Obama's leadership, public faith in the federal government’s ability to respond to natural disasters rose from 33 percent after Hurricane Katrina to 75 percent after Superstorm Sandy in 2012, according to a 2013 Gallup poll. As the storm bore down on New York, FEMA was prepared with more than 400 people in the field 48 hours before the storm hit.

“I love me some Craig Fugate,” Obama later joked on the 10-year anniversary of Hurricane Katrina.

“With Sandy, the comparison to Katrina is night and day,” Dan Matthews, a Republican who has seen five different FEMA directors while serving on the House Subcommittee on Economic Development, Public Buildings, and Emergency Management, recently told Vice News.

But now Fugate is leaving FEMA — he began the retirement process before the November election after nearly eight years heading the agency. “I’ve signed my parole papers,” he said.

President Trump has not yet put forward a nominee to lead the government agency with a $13.9 billion annual budget.