Liberals and unions are outraged, but limiting the power and privilege of public sector unions makes economic sense 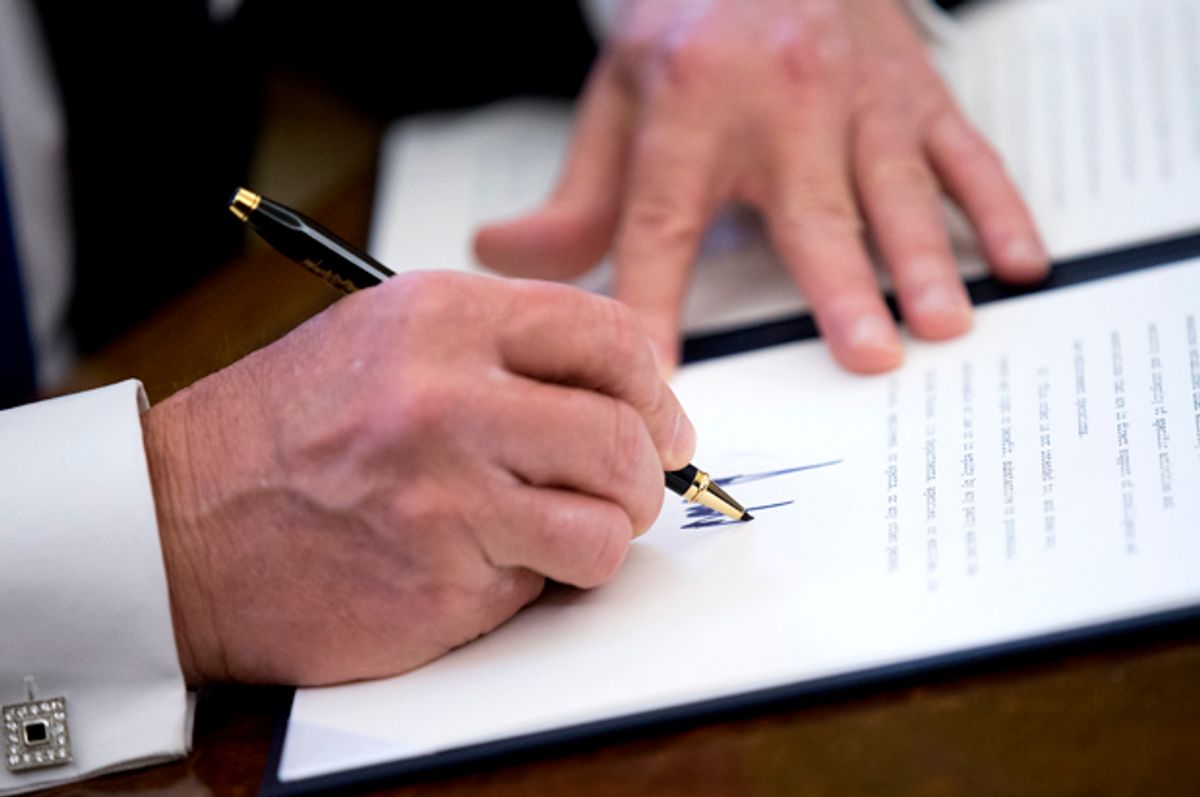 On Monday, President Donald Trump signed an executive order freezing federal hiring in almost every area of the government — with the military, public safety and public health exempted. This is a win for taxpayers and a much-needed rebuke to the many bureaucrats and lobbyists enriching themselves off government cronyism. I hope that state and local government leaders are emboldened to follow Trump’s lead.

Trump was elected on a promise to "drain the swamp." That would seem to include the top four richest counties in the United States, all of which are in the Washington suburbs, according to U.S. Census Bureau data measuring median household income. Among the top 20 wealthiest American counties by that standard, nine are in the D.C. metropolitan area.

As my colleague Matthew Rozsa has reported, Trump's move has drawn howls from union bosses. If you can judge a man by his enemies, then Trump is on solid footing to score wins not just for hardworking, business-owning taxpayers but also for the working class.

As I wrote for the Competitive Enterprise Institute while serving as a fellow there, a common claim made by government employee unions and their supporters is that they stand up for the little guy. Cue Aaron Copland’s “Fanfare for the Common Man.” But the reality is more complex.

Public sector unions are increasingly becoming bastions of white-collar skilled workers, counter to the mythology of a union member as a blue-collar everyman. Government unions are major campaign donors to the Democratic Party. Elected officials who rely on unions to remain in office, in exchange for expanding benefit packages, amount to a toxic combination that is driving cities like Detroit and Stockton, California, and states like Illinois and New Jersey, to the brink of fiscal insolvency.

While political pressures impose a limit on how much government can extract from taxpayers today, that check on government predation largely does not apply to future generations. Pensions, by contrast, allow politicians to pay off their government union allies with promises of future compensation collected from taxpayers to come.

The situation is even worse than one of concentrated benefits and diffuse costs. Through public pensions, taxpayers subsidize concentrated benefits and diffuse and deferred costs. This is troubling when considering current American demographics, with projections of continued shrinking labor-force participation rates and worker-to-retiree ratios. This amounts to what Nobel laureate economist James M. Buchanan has described as “taxation without representation” levied upon future generations.

Government employee unions create a more expensive and protected class of workers at the expense of nonunion workers, students and taxpayers. These unions engage in politics to expand and protect the perks of government employees who are more likely to have attended college — and have more generous salary and benefit packages —than the average private sector worker.

Government employee unions divide American workers into two distinct classes: 1) those who earn a living in the private market and 2) those who work for the government and enjoy higher wages and benefits and ironclad job protections. This hurts both the direct victims of this inequality and taxpayers more broadly.

Collective bargaining agreements also enable government unions to gain outsize pay and benefits and mean that taxpayers end up paying more for public services. In the historical context of the 50-year "War on Poverty," government unions have not been champions of the neediest in society.

Daniel DiSalvo, a City College of New York professor and Manhattan Institute fellow, documents in his book "Government Against Itself: Public Union Power and Its Consequences"  government inefficiencies and conflicts of interest inherent in public sector unionization, which comes at the expense of workforce accountability and fiscal restraint. Central to this conflict is the role of collective bargaining — the negotiations between union leaders and elected officials or career bureaucrats.

Public sector unions use this process as a tool to increase their power and compensation for their members at the expense of the taxpaying public. They also make campaign contributions to the same politicians whose staff sits on the other side of the bargaining table — unless those politicians are Republicans — which gives them significant leverage. Politicians can then pay back the unions with higher wages funded by taxpayers. This creates an upward ratchet effect that makes public-sector employee compensation trend upward, not because of natural market forces but because of political dynamics. Trump is playing the role of human grenade to blow up this toxic feedback loop.

Public sector unions are inherently political institutions, funded at taxpayer expense, whose core mission is to advance the interests of a protected class. They rely on the growth of government for members. Those who believe government can and should do more to create greater opportunity for the poor should take a serious look at the costs and inefficiencies imposed by government unions — costs that crowd out basic public services that all residents rely on, from garbage collection to fire protection.

One of unions’ most powerful tools in collective bargaining is the threat of strikes, which can cripple government services. As DiSalvo pointed out, old-school liberals like former New York mayor Fiorello LaGuardia and former AFL-CIO president George Meany opposed public sector unions, even as they strongly supported unionization in the private sector.

“As a matter of duty, public services, they argued, must not be imperiled by strikes,” DiSalvo noted. “It also seemed natural to maintain that the people (i.e., the government) cannot strike against the people.” That sentiment was shared by Franklin D. Roosevelt, the famously liberal president who ushered in massive government expansion. “Meticulous attention should be paid to the special relations and obligations of public servants to the public itself and to the Government,” Roosevelt cautioned. “The process of collective bargaining, as usually understood, cannot be transplanted into the public service.”

Public sector unions’ interests thus run counter to those of taxpayers, who end up paying more for less in terms of public services. Moreover, such unions’ reliance on the endless expansion of government can be detrimental to state and local economies.

As recent experience shows, states where public sector unions are most powerful have seen the greatest outflows of businesses and population. Government unions are a powerful interest group that is uniquely privileged. David taking on Goliath they are not. Now Trump has taken on this Goliath himself.