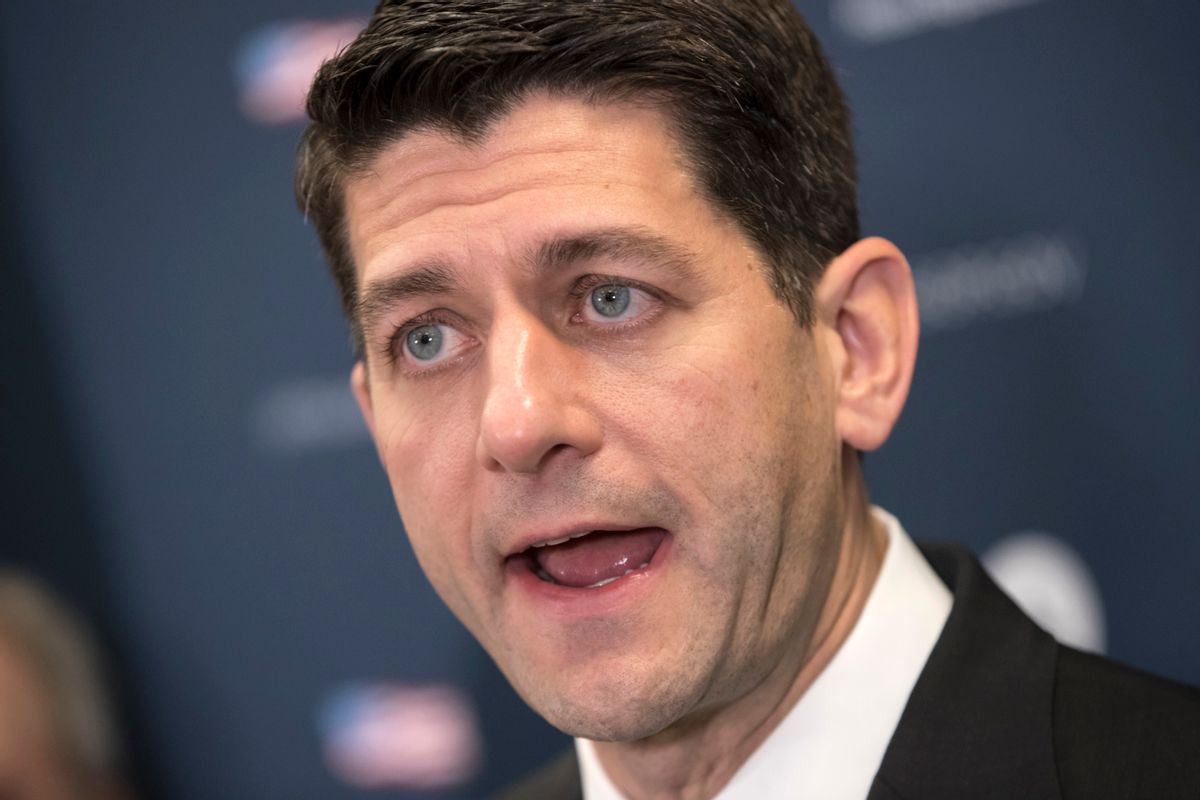 House Speaker Paul Ryan of Wis. speaks during a news conference on Capitol Hill in Washington, Tuesday, Jan. 24, 2017, to announced that he has invited President Donald Trump to address a Joint Session of Congress on Feb. 28. (AP Photo/J. Scott Applewhite) (AP)
--

PHILADELPHIA  — Congressional Republicans laid plans Wednesday to act on a health care repeal bill by the end of March and rewrite the tax code by August as they sketched out an ambitious agenda for their first 200 days under President Donald Trump.

Meeting in Philadelphia for their annual policy retreat, they also discussed action to raise the nation's borrowing limit, write an infrastructure package sought by Trump and push funding for defense and border priorities.

The gathering was shadowed by a rocky start to the Trump administration, full of distracting, inaccurate claims about voter fraud and inaugural crowd sizes that some lawmakers fear could distract from their ability to deliver in a new era of GOP control. Trump will address the retreat on Thursday.

"We have to get on to the serious issue of governing, these other issues are distractions," Rep. Charlie Dent, R-Pa, said. "It's a very aggressive agenda."

Lawmakers arrived in Philadelphia via chartered train Wednesday. The 200-day agenda was discussed at a downtown hotel, in a working session led by Senate Majority Leader Mitch McConnell and House Speaker Paul Ryan.

"Our goal is to get this done by the end of summer, which is, for Congress, quite fast," Ryan said on MSNBC Wednesday night about a tax overhaul plan that aims to reduce corporate rates to 20 percent or lower. "We really don't think we can get the kind of economic growth we have the potential to get without tax reform."

The Senate will also be occupied with confirming a new Supreme Court justice to fill the court's vacancy. McConnell got a standing ovation from House and Senate lawmakers in the closed-door meeting for his aggressive tactics last year in refusing for 10 months to fill the vacancy created by Antonin Scalia's death, which now hands Trump a seat to fill. Trump has said he'll announce his nominee next week.

Details from the gathering were described by lawmakers and aides speaking on condition of anonymity to discuss the private conversations.

Along with Trump, Vice President Mike Pence is addressing the gathering Thursday, as is British Prime Minister Theresa May, in a first for a foreign head of state.

Lawmakers were trying to focus on areas of agreement, downplaying distractions created by Trump.

"What we have to do is focus on the things that unite us," Sen. John Thune of South Dakota, the No. 3 Senate Republican, told reporters at a press conference opening the retreat, listing repealing and replacing the health law, overhauling the loophole-ridden tax code and boosting national security. "Those are clear issues that unite us."

As for message discipline and coordination with the White House, Thune deemed that "a work in progress."

Lawmakers gathered as the White House announced a series of executive actions aimed at building a border wall and cracking down on illegal immigration, and as Trump declared there would be an investigation into voter fraud although there is no evidence of the millions of illegal ballots he claims cost him the popular vote.

The Trump administration is also readying a sweeping review of how America conducts the war on terror, including possible resumption of banned interrogation methods, according to a draft executive order obtained by The Associated Press.

But the actions on election fraud and torture drew a sometimes skeptical response as lawmakers arrived in Philadelphia.

"This is a debate we've had already, we believe it is settled law," Thune said on the issue of torture, which Congress has banned.

Football star Peyton Manning also was scheduled to appear at the retreat.