Not helping the little man: For most Americans, Dow 20,000 carries little benefit

Your 401(k) may see a little bump, but the Dow's surge is mainly helping the richest Americans 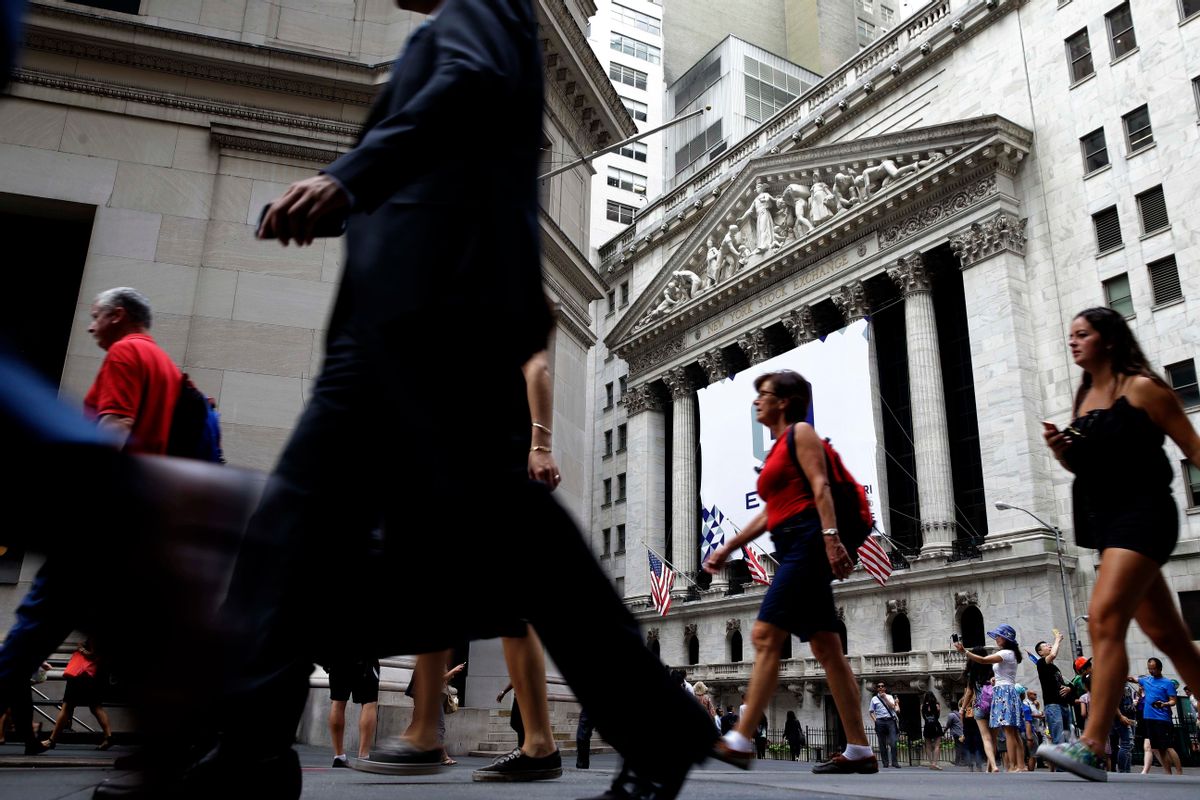 WASHINGTON — While Wall Street celebrates yet another stock market record — surpassing 20,000 on the Dow Jones industrial average — many Americans have little reason to cheer.

Despite the spread of 401(k) retirement plans, the wealthiest 10 percent of households own roughly 80 percent of stock market wealth. The Dow's 23 percent surge over the past year has benefited mostly investors who were already well-off.

The rising concentration of wealth at the top is one reason why the economy's significant gains since the Great Recession ended 7½ years ago haven't been felt by many Americans. Though the Dow more than doubled in President Barack Obama's two terms, pay growth was stagnant, especially for people without higher education or high-tech skills. Discontent and anxiety about the economy's direction helped fuel President Donald Trump's election victory.

Now, a major challenge for Trump is to help extend the economy's gains beyond wealthier households and those in thriving large metro areas to struggling regions and many rural areas.

Research by Edward Wolff, an economist at New York University, found that the wealthiest 10 percent of households owned 81.4 percent of stock market wealth as of 2013, the most recent year for which figures are available. The middle 60 percent of U.S. households owned just 7.7 percent. Those figures include stocks held in individual retirement plans and 401(k)s as well as in mutual funds.

"Any boom in the stock market is going to pass by the great majority of Americans," Wolff said.

Other data echo his findings. The richest 1 percent of Americans owned 44 percent of stock market wealth in 2012, according to calculations by Gabriel Zucman, an economist at the University of California, Berkeley.

A rising stock market does provide benefits to the broader economy. Wealthier households typically increase their spending as their assets rise in value. And even Americans with only modest retirement accounts may feel wealthier and spend more. Such increased spending, in turn, can spur economic growth and lead to more hiring.

And when the stock market is strong, businesses are more likely to issue new shares, and some will use the proceeds from those share sales to add jobs. A study by the Kauffman Foundation found that in 2010, 62 percent of the jobs at startup companies had been added after those companies sold shares to the public.

For typical American families, though,the largest source of wealth is the equity in their home. In large part, that explains why even after the recession officially ended in June 2009, many Americans enjoyed little improvement in their finances.

Stock markets rebounded beginning that spring. But home values kept falling until 2012 and returned to pre-recession levels only in September 2016, according to one national measure. In many parts of the country, home values are still below their levels of nearly a decade ago .

Just under half of American households own stock, either directly or through retirement accounts, according to Federal Reserve data. Most of those portfolios are relatively small. Only one-quarter of the poorer half of American households own stock. The average holding for those people is $54,000. The giant mutual fund company Vanguard says its typical retirement account balance in 2015 was $26,405.

Among the wealthiest 10 percent, more than 90 percent own shares, and their accounts, on average, are nearly 20 times as large, at $970,000, according to Fed data.

The proportion of Americans with retirement accounts actually declined slightly from 2010 to 2013 — from 50.4 percent to 49.2 percent.