Just say no: On both political and moral grounds, Democrats should oppose all Trump appointees

Voting no on Trump's nominees is largely symbolic — but as Hillary Clinton's defeat proves, symbolism matters 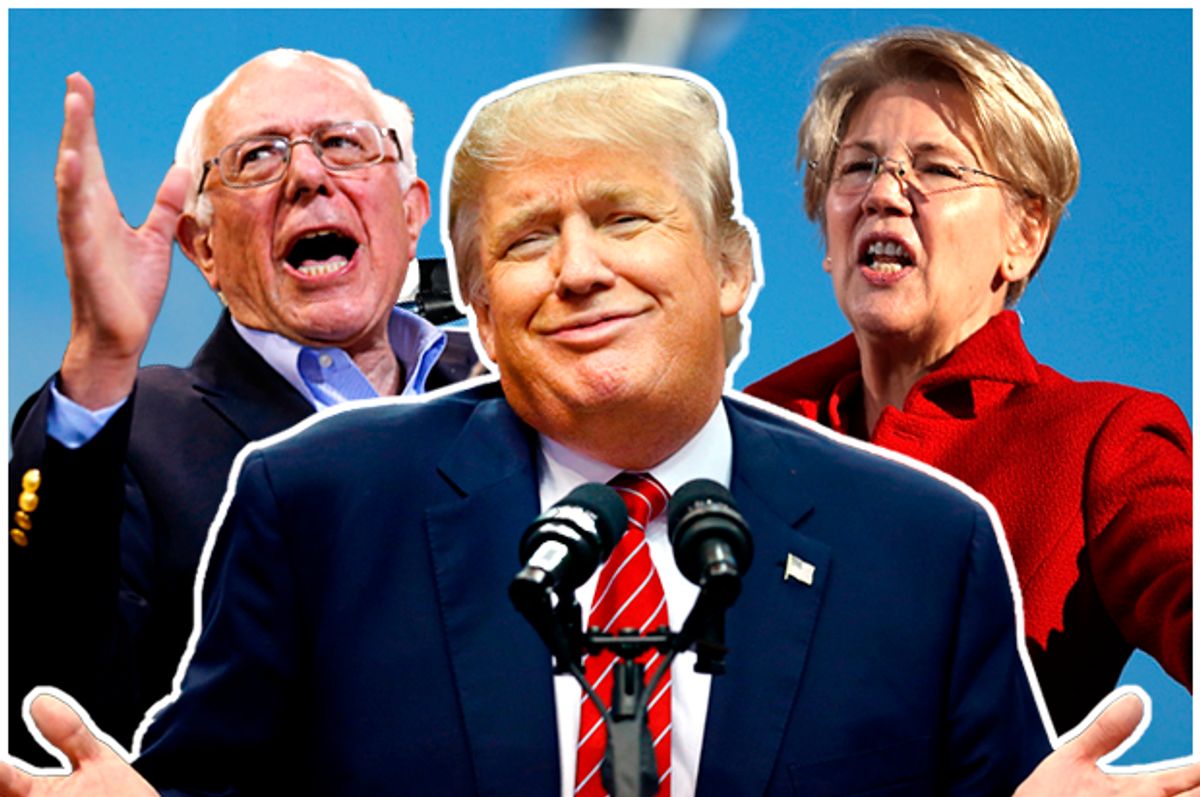 Donald Trump has coasted into the White House on an Electoral College technicality, after losing the nationwide popular vote to Hillary Clinton by nearly 3 million votes. He has the lowest approval rating for any incoming president since officials started tracking such things, and his first full day in office was greeted by what was likely the largest protest in American history.

Odds are that he and the Republicans will become even less popular as time goes on and their often terrifying policies are put into motion.

Under the circumstances, the safest political bet for Democrats — not to mention the high moral ground — is t0 simply oppose Trump in everything he does. That way, when he becomes the biggest presidential failure of all time, Democrats can honestly tell the public that they never cooperated with that monster.

And yet, in a move that seems designed to uphold every stereotype about quisling middle-road Democrats, many Democratic senators are already registering "yes" votes on some of Trump's Cabinet nominees. It's still a modest number, since we're mostly talking about committee votes at this point, but even progressive senators like Sherrod Brown of Ohio and Elizabeth Warren of Massachusetts have voted to move forward with obnoxiously unqualified or downright despicable nominees.

These senators have reasonably coherent arguments to offer. Warren defended her committee vote for Ben Carson as the head of Housing and Urban Development by noting that Carson had made some promises to her, in response to tough questioning. "If President Trump goes to his second choice," she said, "I don’t think we will get another HUD nominee who will even make these promises — much less follow through on them."

Justifying his votes for James Mattis as defense secretary and John Kelly to head the Department of Homeland Security, Sen. Bernie Sanders, who remains an independent but caucuses with the Democrats, said he hopes these nominees "will have a moderating influence on some of the racist and xenophobic views that President Trump advocated throughout the campaign."

These are nuanced, thoughtful arguments. Unfortunately, if there is one takeaway from Hillary Clinton's agonizing electoral defeat, it is this: No one cares about your nuance.

In 2002 Clinton faced a very similar dilemma to what congressional Democrats are facing now. As the junior senator from New York, she was confronted with the decision whether to vote to grant president George W. Bush the authority to invade Iraq.

As foreign policy expert Fred Kaplan laid out in a Slate article in February 2016, it's clear that Clinton was wary of invading Iraq and was one of the most outspoken senators against the invasion. But voting no would merely be symbolic, because the Republicans had the votes to o ahead without her. From her vantage point, it probably seemed easier to vote yes to fend off hysterical accusations from Republicans that she was weak on terrorism and willing to ignore the supposed threat from Saddam Hussein. Why waste political capital on meaningless symbolism, right?

Except, as history proved, that yes vote, although it had absolutely no impact on the decision to go to war or the disastrous outcome of that conflict, would be Clinton's political destruction. If Clinton had sucked it up and spent her political capital on a symbolic no vote 14 years ago, she would almost certainly have become president — either in 2009 or right now.

That vote haunted Clinton through the tight 2008 Democratic primary campaign. There's no way to roll back history and try out the experiment, but the fact that Clinton had voted to authorize war and Barack Obama had not (largely because he wasn't in the Senate at the time) was clearly a key factor in his victory.

But where that 2002 vote really came back to haunt Clinton was in 2016. Both the WikiLeaks-driven, Clinton-hating left bros and the Trump propaganda machine hyped that vote so hard that the public could be forgiven for thinking that Clinton personally ordered the invasion of Iraq. That vote created an opening for Clinton haters of all stripes to caricature her endlessly as a warmonger and sellout, and helped justify the embittered Sanders delegates who booed every mention of Clinton's name at the Democratic National Convention.

The effect of all this overblown bile wasn't huge: Most of Sanders' primary supporters ultimately voted for Clinton, and while the never-Clinton fauxialists have been a loud presence on social media, they are small in number. But in an election as tight as the 2016 one, even minor effects are enough to tip the balance. Clinton's loss swung on a margin of 80,000 votes in three counties in the swing states of Michigan, Pennsylvania and Wisconsin, about 0.06 percent of the total national vote.

Under the circumstances, it's fair to say that if Clinton had sucked it up and voted no on the Iraq war authorization in 2002, she could have prevented the catastrophic outcome of the 2016 presidential election. Yes, her army of haters would still launch various random accusations, but the edge would have been considerably blunted if all along she had been able to say, "I voted no on George W. Bush's war in Iraq."

Instead, she was forced to go into a lengthy explanation whenever the question came up. You never want to do that in politics: Trying to explain yourself tends to come across as defensive, even when it's not.

That's how Democrats need to think about this: Do you want, years from now, to be forced into offering some long-winded justification for yourself when a political opponent accuses you of colluding with Trump? Or do you want to be able to say, "I opposed him from the beginning, and my record speaks for itself"?

There is no point in denying that ideological infighting is hobbling the left. Clinton's defeat proved that yet again. Sometimes it's unavoidable: There's no way to please everyone, and some factions are demanding things that are impossible or simply a bad idea.

But that's the beauty of the no-on-all-things-Trump plan. It unifies the various factions of the left at no real political cost. The votes are, after all, largely symbolic. Democrats can't actually block any of Trump's nominees, so there's no real danger that Trump will punish them by filling those posts with even more odious people. Trump is loathed not just by purity leftists but by regular leftists, liberals and most moderates. It's doubtful any of them will object if their senators and representatives obstinately oppose all things Trump. It buys goodwill, with very little real sacrifice.

The moral and policy debates over the votes can get complicated. But as a matter of pure politics, the answer is clear: No on all nominees. Learn from the lesson of Hillary Clinton, who was forced over and over to explain a 14-year-old vote by invoking a bunch of nuance no one cares about, especially years after the fact. "No" is simple and straightforward. It's the vote that will still look good a decade from now, when Donald Trump has gone down in history as the worst president ever.