We're gonna make it after all: Let's throw our hats in the air for Mary Tyler Moore

Thanks to Moore, generations of young women knew they could be single, unapologetic and confident 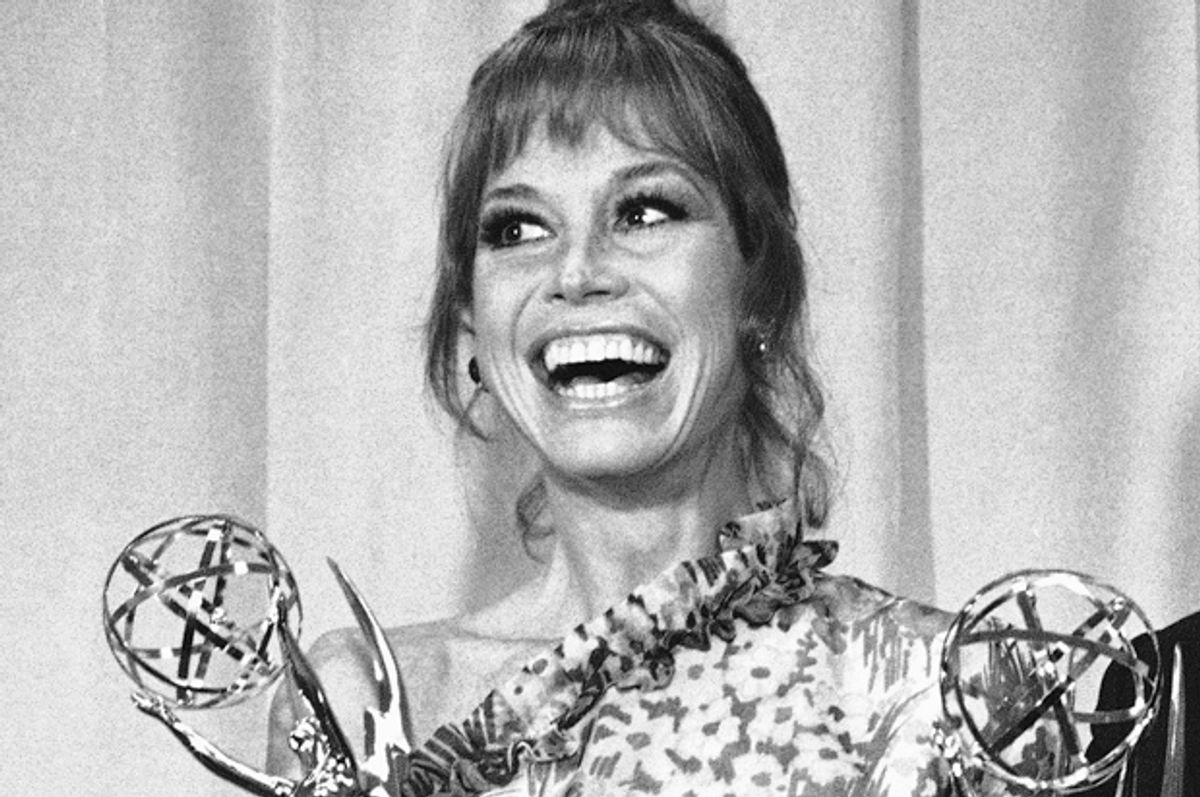 There’s an exchange in an early cut of the series premiere of “Private Practice,” the “Grey’s Anatomy” spinoff featuring Addison Montgomery (Kate Walsh). In a long passionate speech, the good and single doctor explains to her boss why she’s quitting her enviable, high-powered job at his Seattle hospital and relocating to Malibu.

“I want to throw my hat all the way up in the air!” she sings out triumphantly, effectively shutting down his protests. Anyone who has watched “The Mary Tyler Moore Show” could understand what Addison meant: She is choosing to be free and clear, to have every choice in front of her, to actualize without apology.

That exchange didn’t make the final edit of “Private Practice” that aired, and that’s actually a good thing. Only one woman could pull off that move, and that’s Mary Tyler Moore.

Millions of us imagined ourselves trying to throw that metaphorical hat and still envision doing so 40 years after “The Mary Tyler Moore Show” aired its final episode. Moore, a seven-time Emmy winner, passed away on Wednesday at the age of 80, but her tremendous influence on television ensures that generations to come will feel her impact.

Moore was the recipient of a wealth of critical acclaim throughout her career, which included an Oscar-nominated turn in “Ordinary People” as well as other notable film roles. But she’s most often celebrated for her starring role in “The Mary Tyler Moore Show,” which aired 1970 to 1977.

“Mary Tyler Moore” is universally considered to be one of the best series on television. At the height of its popularity when it was still in production, it ranked as the seventh highest-rated series on television and won 29 Emmy awards, a record that would not be broken until “Frasier” snagged its 30th in 2002.

In the years since it left the air, “Mary Tyler Moore” been heaped with an assortment of honors: The Writers Guild of America ranked it sixth on its list of 101 Best Written TV Series of All Time. Various critics have cited its episode “Chuckles Bites the Dust,” which highlighted Moore’s ability to veer between sobriety and unfettered physical comedy. The sitcom’s season finale is considered to be among the most successful of any on television. Think about how difficult it is to pull off the last episode of any series and realize what astronomical praise that is.

Honors aren’t what guarantee a series or its star legendary status, of course. For that, we have to credit the heart and genuine warmth of spirit that Moore put into her character.

Mary Richards’ cheerful, no-nonsense demeanor defied the industry’s longstanding practice of relegating female characters to the roles of housewife or secretary. At first Mary Richards applies for a secretarial position at Minneapolis’s news station WJM but ends up being an associate producer. Even in simple act of starting her career, Moore’s Mary Richards has the guts to reach higher and for greater things.

“Mary Tyler Moore” was innovative in its depiction of women in the workplace and in portrarying Mary's ability to navigate the extreme egos clouding the WJM ecosystem — especially her brusque bear of a boss Lou Grant (Ed Asner) and the delightfully vain Ted Baxter (Ted Knight). Yet it is her loyal friendship with her roommate Rhoda Morgenstern (Valerie Harper) that has made the show an important touchstone.

For there would not be a “Sex and the City” without the characters and relationships that Mary cultivated. No thoughtful explorations of platonic bonds on “Friends” or “Will & Grace” — at least not the kind we’ve come to expect from our comedies. No Meredith Grey or Addison Montgomery or any number of Shonda Rhimes heroes.

Tina Fey credits Moore for granting her a template to use to develop her overworked, gawky Liz Lemon on “30 Rock.” These are only a few of the women Moore’s work inspired. Millions of everyday girls and women learned from her example of living single in the city without apology.

“It has been pointed out on countless occasions that ‘The Mary Tyler Moore Show’ was the first modern situation comedy in which the female star was not only not married but not engaged,” wrote Nora Ephron, no slouch herself, in a loving essay about the show. “But the important thing was that Mary Richards didn’t even seem to care.”

Moore rose to fame before creating her famous sitcom as Laure Petrie, the plucky wife to Dick Van Dyke’s comedy writer on “The Dick Van Dyke Show,” which ran on CBS from 1961 to 1966 and earned her two Emmys.

The creation of “The Mary Tyler Moore Show” not only broke barriers on the television screen, but behind the camera as well. The sitcom was the first production under Moore’s independent production company, MTM Enterprises Inc., formed in partnership with second husband Grant Tinker (who passed away in November at the age of 90). The MTM logo, featuring Moore’s mewling cat, was a parody of the roaring lion at the center of the Metro-Goldwyn-Meyer logo.

Among the many productions created under the MTM shingle were “The White Shadow,” “WKRP in Cincinnati,” “Remington Steele,” “St. Elsewhere” and “Newhart.” For a long stretch of time, that kitten seemed to be everywhere. A syndication afterlife extended by cable and streaming services (you can watch “Mary Tyler Moore” on Hulu, for example) ensures it will be at large for many years to come.

What will be missing is the moxie and humor of its creator.  This past summer the Television Critics Association gave “The Mary Tyler Moore Show” its Heritage Award, which recognizes a series for its cultural and social impact.

Moore could not be there, but she sent her onscreen best friend Harper to accept and read a thank-you letter she had penned. “Does ‘Heritage’ mean we’re all getting old?” she reportedly asked. “If so, all you critics can f—k off.”