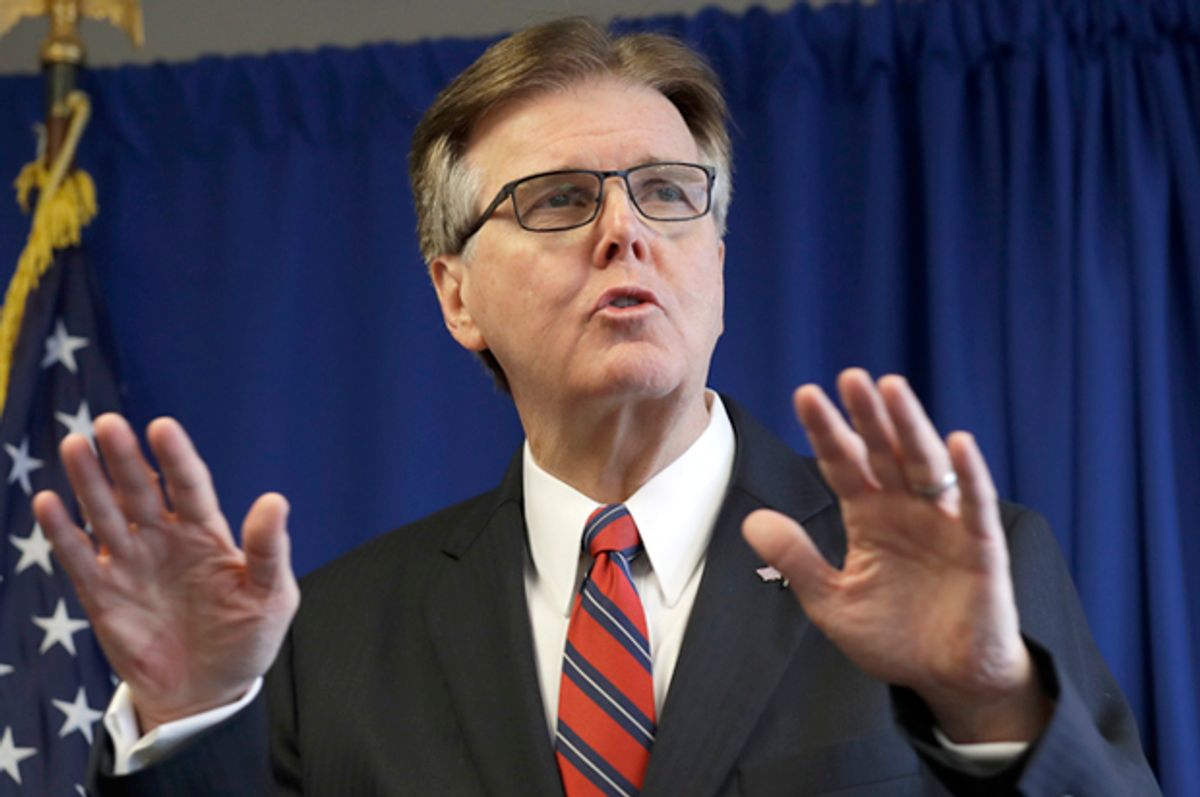 For understandable reasons, Donald Trump and his cadre of Beltway Republicans are dominating the news cycle. But it's also important to pay attention to what's going on in the states, where the same reactionary revolt that lifted Trump to the White House is playing out closer to the ground.

In the Texas legislature, state Sen. Lois Kolkhorst, along with Lt. Gov. Dan Patrick, unveiled Senate Bill 6 earlier this month, a bill that would bar transgender people from using the bathroom that matches their gender when visiting or working in government buildings. Instead, all people in such buildings for any reason would be compelled to use a restroom matching the gender assigned them at birth.

In an even stranger twist, the Texas Supreme Court, under heavy fire from Patrick, has taken up a case challenging the city of Houston's policy of offering to employees married to someone of the same sex benefits that are equal to those it provides those married to a member of the opposite sex.

Both these actions bear the fingerprints of Patrick, a Trump-style populist who was a right-wing talk-radio show host before moving into Lone Star State politics. They serve as reminders that the radically homophobic branch of the GOP hasn't gone away, despite its rapidly declining popularity among the public at large.

If anything, the election of Trump is emboldening the far right on many fronts. After all, Trump is wildly unpopular and lost the national election by almost 3 million votes but still got to be president. That is surely bolstering the spirits of those forces who seek to push a radical but unpopular agenda.

SB6 is already a political failure for its proponents. A similar and now notorious law, House Bill 2, was passed in North Carolina last spring and the result for the state has been an unmitigated disaster: Nationwide boycotts, unwanted attention and a Republican governor, Pat McCrory, losing his seat to a Democrat in a state that Trump carried and in a year when Republicans otherwise did well at the polls.

Fear that the same thing might happen in Texas is already shaping the response to this new "bathroom bill." Republican Gov. Greg Abbott, who is up for re-election in 2018, has declined to offer a public opinion about SB6.

“If you want a piece of what North Carolina got as a result of HB2, it says a lot about you as a politician," said Cathryn Oakley, a senior legislative counsel for the Human Rights Campaign, over the phone. "It says a lot about what your priorities are.”

In the face of the backlash, Kolkhorst — the state senator from south central Texas who sponsored the bill — is already spinning like a top, trying to pretend that an obnoxiously anti-trans bill is anything but.

"It's really not about the transgender," Kolkhorst told the Houston Chronicle earlier this week. "It's about other people that will abuse that."

That, of course, is nonsense. If the purpose of the bill is to keep men out of the women's room, it's counterproductive. After all, the language of the bill would force transgender men — who are in fact men — to use the women's bathroom.

Justice Anthony Kennedy wrote in that decision that the "desire to harm a politically unpopular group" doesn't constitute a legitimate government interest. Which is exactly the basis on which Lambda Legal and the ACLU North Carolina are challenging North Carolina's law, claiming that it was written as an attack on a group of people just because of who they are.

The Texas right-wing obsession with being the potty police is baffling, but just as baffling is the case that the Texas Supreme Court agreed to hear in March: The all-Republican court had previously declined to hear challenges to Houston's inclusive policy toward same-sex couples, but Abbott and Patrick pressured the court to reconsider it in October.

This case, to put it lightly, looks like absolute nonsense. In their brief, Patrick and Texas Attorney General Ken Paxton are arguing that Obergefell v. Hodges, the Supreme Court case that allowed same sex couples the right to marry, does not include a "command" that government employers must "take steps beyond recognizing same-sex marriage — steps like subsidizing same-sex marriages (through the allocation of employee benefits) on the same terms as traditional marriages."

Almost every responsible legal expert would respond that that's exactly what the Obergefell v. Hodges decision said: The court ruled that marriage is marriage, regardless of the gender of the two people who marry each other.

Oakley pointed out that the plaintiffs in Obergefell v. Hodges weren't suing just for the right to call themselves married or to obtain a marriage license, but or the "bundle of rights and responsibilities" that come with marriage. They were suing so as to have access to hospital visitation, inheritance rights, custody rights and, yes, employee benefits. The court's ruling established that same-sex couples are equal in the eyes of the law. Now Texas Republicans are trying to create some loophole or exemption that would undermine that fundamental principle.

“The interest in pursuing this case is puzzling," Oakley said. "I think it has more to do with politics than the law.”

Oakley is right, of course. This case would seem almost comically cut and dried. The Texas court, which is notably friendly to conservative views, had to be strong-armed into hearing it in the first place. The odds that the plaintiffs can prevail is low to begin with — and nearly nonexistent if this case is ever tested in the U.S. Supreme Court. The only real purpose of pursuing this charade is so Republican politicians can send a message to their religious-right voting base that they are going to keep on harassing LGBT people however they can, even in the face of law, common sense and widespread political opposition.

In fact, the anti-LGBT agenda is incredibly unpopular these days. Polling suggests that large majorities of Americans oppose these potty-police laws and support marriage rights for same sex couples. But the election of Trump signals to conservatives that being unpopular doesn't necessarily preclude political victory. His ascent, and the relentless media circus that surrounds it, also works as a distraction. Right-wing ideologues are free to attack LGBT rights — and pursue other elements of their agenda — without attracting the headlines that our Twitter-happy new president monopolizes.