Keep in step: The women's march was great, but it's not enough

Work must take place at every level, from organizing and keeping informed, to sending emails to officials 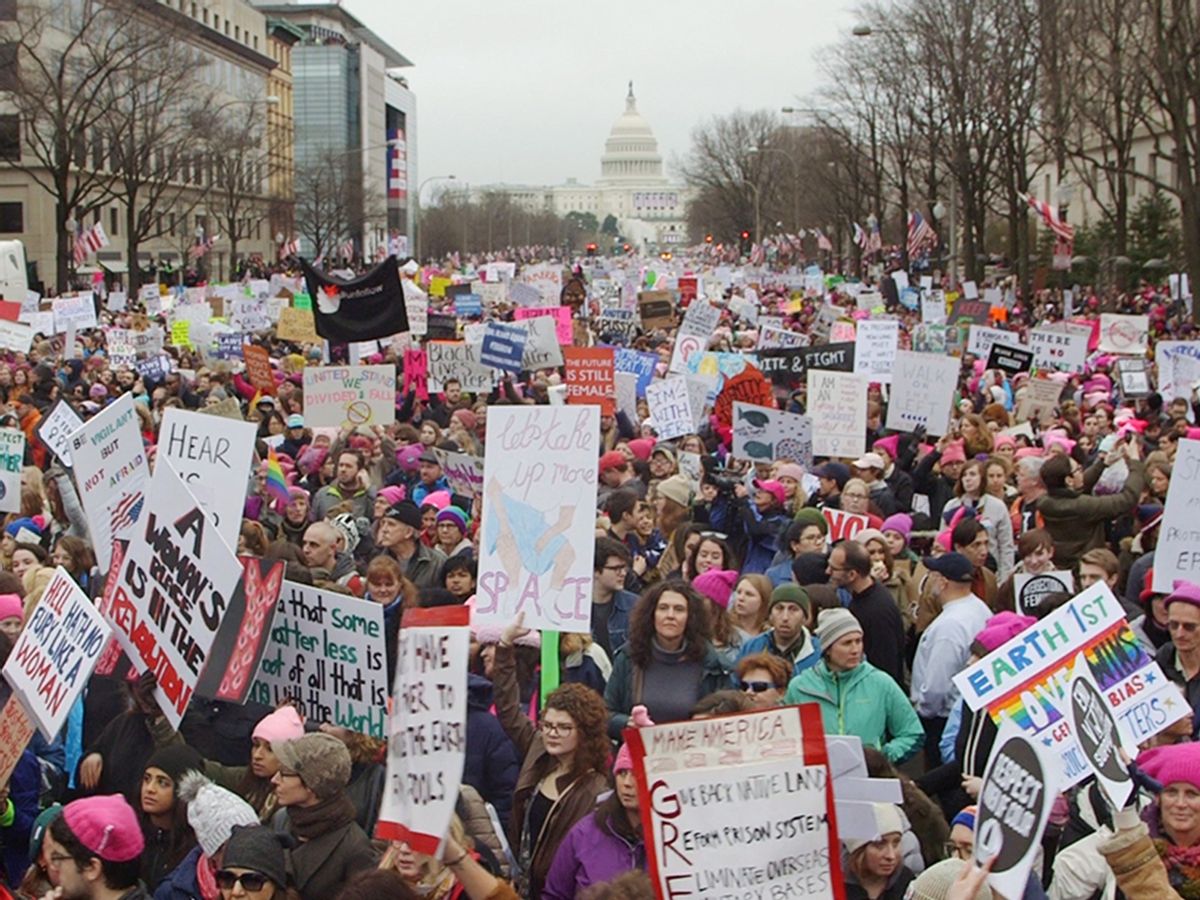 “Peaceful protests are a hallmark of our democracy. Even if I don’t always agree, I recognize the rights of people to express their views.”

It sure didn’t sound like the troll we’ve come to know. A couple of days in, maybe the awesomeness of becoming the leader of the free world had penetrated his roiling psyche and settled him down.

Nah. Clearly, he hadn’t written it. Because just two hours before, in a tone far more like the narcissistic whinge we’re used to, the Trump account tweeted, “Watched protests yesterday but was under the impression that we just had an election! Why didn’t these people vote? Celebs hurt cause badly.”

Not voting? Celebs? That sound you heard was my cognitive dissonance alarm hitting DEFCON 1.

In both instances, the bad and not-quite-as-bad Trump personas were writing about Saturday’s worldwide protests, women’s marches in more than 500 cities in the United States — at least 3.7 million Americans — and more than another hundred demonstrations internationally, from London and Paris to that handful of hearty souls who displayed their protest signs in Antarctica.

There were half a million people in Washington, DC, just the day after the less-than-superb turnout for Donald Trump’s inauguration and some 400,000 here in New York City, if not more. According to Sarah Frostenson at Vox, “… Political scientists say they think we may have witnessed the largest day of demonstrations in American history.”

I have been at many, many protest marches in my life, going back to the big anti-Vietnam demonstrations of the late ’60s and ’70s, and I have never experienced anything like what happened this weekend. We arrived at our designated stepping off point on Saturday at 11:30 a.m., right on time, but the block was so packed it already had been penned off. A marshal suggested we move up to the next street above and work our way back down to where we were supposed to be but it was impossible and in the process I managed to get separated from my girlfriend Pat and another friend — too much of a crowd between us to get back to one another; a situation complicated by a dying cellphone.

And so there I stood, alone in the crowd, waiting for something to happen, soaking in the excitement and anticipation everyone shared at being there, enjoying the collegiality, reading the hundreds of signs, from the woman carrying a 5×7 card with the words, “A tiny sign for a tiny man” to the guy not far from me whose placard read, “A woman made this sign for me.”

Apparently, our numbers were so unexpected it took a while for the organizers and police to figure out what to do with us all, so it was 2:30 p.m. or so before we finally began to move, slowly swinging south onto Second Avenue on the east side of Manhattan. This wasn’t so much a march as a slow group shuffle; there were so many people crowded onto the street we could only move a little bit at a time, like an escaped chain gang bound at the ankles.

We worked our way down to 42nd Street and then west. I was tempted to peel off at Grand Central Station and head home — the hour already was late — but I was determined to make it all the way to the end, to reach Fifth Avenue and 56th Street and summit at Trump Tower.

By the time we made our way onto Fifth Avenue the sun was going down but we kept moving, singing, chanting, cheering. A 6-year-old girl, perched on a grown-up’s shoulders, urged us on: “We are the popular vote! This is what democracy looks like!” she shouted and we echoed everything she said. This was her personal favorite: “Donald Duck for president!”

We got to a block from Trump’s gilded pleasure dome and then were turned away by parade marshals and police. We could get no closer; barriers blockaded the way. Amicably, the protesters broke up, walking east and west on the cross streets, many filling the bars and restaurants, others crowding into the subway stations, headed home.

White House press secretary Sean Spicer tried to shrug off the significance of what happened on our streets Saturday. Referring to the Washington march, he said, “There were people who came to the Mall, as they do all the time, sometimes in smaller numbers.” Ho-hum, he seemed to say.

“A lot of these people were there to protest an issue of concern to them and not against anything,” Spicer said, personifying the self-deception that believes the lie.

Sorry, Sean — Saturday was a stunning affirmation of defiance, a rebuke and warning that resistance has just begun, yet only if we have the patience and grit to keep it moving forward.

I’ve told this story here before, but the lesson remains: In the wake of the murder of protesting students at Kent State and Jackson State in 1970, the big antiwar demonstrations that followed and the nationwide student strike that shut down hundreds of colleges and universities, the idea was not just to demonstrate but to mobilize and continue to work toward an end to the Vietnam War. Once the dramatic marches had come to an end, all too many simply took advantage of an early end to the semester and headed for the beach. Little was accomplished and the war continued for another five years. Those of us who wanted to keep the peace work going — the stated intention of the strike — were met with diffidence at best and at worst, outright apathy and resentment.

“Thank you for understanding that sometimes we must put our bodies where our beliefs are,” Gloria Steinem said at Saturday’s rally in Washington. “Pressing ‘send’ is not enough.” She’s right, but marching won’t be enough either as we go up against a committed band of zealots determined to end all remaining vestiges of the New Deal and the Great Society and to further enrich the wealth of the 1 percent — especially, of course, themselves.

“This is the upside of the downside,” Steinem said on Saturday. “This is an outpouring of energy, and true democracy like I have never seen in my very long life. It is wide in age, it is deep in diversity, and remember, the Constitution does not begin with ‘I the president,’ it begins with ‘we the people.’”

The work must take place at every level, from local on up: organizing, keeping yourself informed, sending letters and emails, making phone calls, attending town meetings, running for office or working for the candidates who best represent your interests.

And this, perhaps above all: confront your member of Congress. Don’t let him or her off the hook. Make sure your representative doesn’t sell you out to the Big Interests, or deceive you with empty rhetoric. If they do – throw the rascals out.

There is no time to lose. With each day, a cornice of our republic crumbles and the body of democracy struggles to keep itself from stumbling and falling into the abyss. No joke.