Nearly three dozen lawsuits were filed this week against 13 Hardee’s and Carl’s Jr. franchises in 10 states 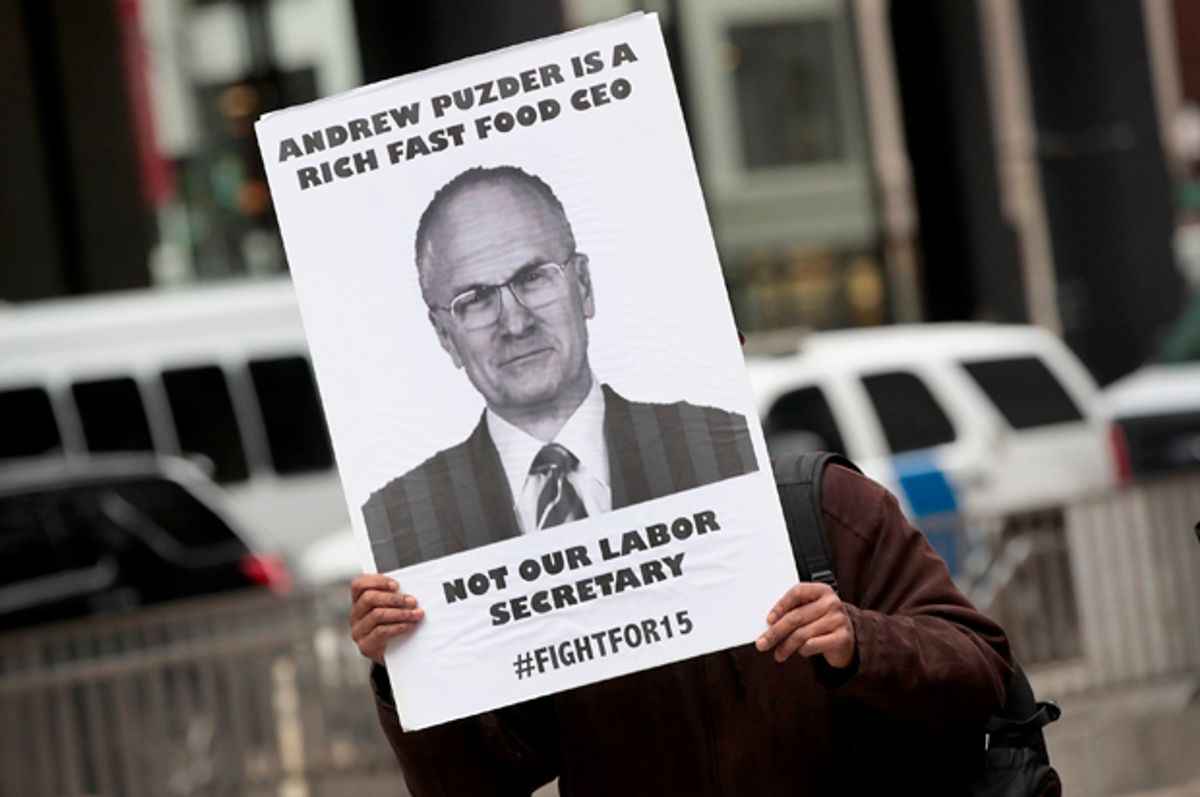 President Donald Trump’s choice for labor secretary, Andrew Puzder, has elicited peals of outrage from Democrats, labor unions and rights groups since his nomination was announced on Dec. 8. As Puzder is chairman of the parent company of Hardee’s and Carl’s Jr., CKE Restaurants, he is being called out as the architect of a toxic corporate culture that has percolated into the company’s franchises.

“If he can’t make sure the law is followed at his own restaurants, what is he going to do if he’s labor secretary,” Ivan Nava, 24, a Carl’s Jr. employee from South Central Los Angeles asked at a press conference on Thursday. At the conference, workers announced 33 complaints against 13 CKE franchises in 10 states.

The lawsuits filed this week allege the existence of ugly work environments even by the fast food industry’s low standards. The suits include four sexual harassment allegations filed with the federal Equal Employment Opportunity Commission, seven unfair labor complaints submitted to the National Labor Relations Board and 22 wage and hour complaints sent to state-level departments of labor.

The union-backed lawsuits come amid an increase in protests in recent weeks by the 5-year-old Fight for $15 labor movement. Images on the group’s Twitter feed on Thursday depicted marchers in Boston, Houston and Kansas City, Missouri, and other cities brandishing signs calling Puzder uniquely unfit to head the Labor Department.

One of the suits alleges an Alabama CKE franchise paid employees with debit cards that included transaction fees, putting their hourly wage below the legal minimum. Another complaint claims a female employee at a Tampa, Florida, restaurant was threatened with sexual violence by a co-worker and was moved to a less-desirable shift when she complained the manager. A North Carolina franchise was allegedly photographing employees participating in Fight for $15 demonstrations and grilled job applicants about their views of the movement before making hiring decisions. If the charges are true, these could be violations of federal labor laws protecting workers’ freedom of speech and right to organize without retaliation or coercion.

CKE declined to comment about the litigation but issued the following emailed statement to Salon: “We’d like to offer a reminder that CKE Restaurants is nearly 95 percent franchised. Each of these 2,769 franchise stores are run independently and solely responsible for their employees, management and adherence to regulations and labor practices.”

Catherine Ruckelshaus, general counsel and program director of the National Employment Law Project, a nonprofit that promotes policies to improve job quality, said CKE profits from the low wages paid to workers at the franchised restaurants — and it does so at the expense of taxpayers.

“Even without factoring in the wage theft, these low, low hourly rates at the restaurants shifts the cost of [the workers] making ends meet to the taxpayers,” she said during Thursday’s press conference.

The Century Foundation, a New York City-based progressive think tank, recently released a list of U.S. Department of Labor and Occupational Safety and Health Administration investigations of CKE restaurants over the past decade. Out of 166 investigations, 87 yielded confirmed violations. About 1,500 workers were exposed to worker safety violations. A separate analysis of federal employment discrimination lawsuits published this week by Capital & Main found that Hardee’s and Carl’s Jr. restaurants had the highest number of complaints among the nation’s biggest burger chains since Puzder took control of CKE in 2000.

Under the Obama administration, the U.S. Department of Labor had singled out the fast food industry for strategic enforcement because of the high number of violations by employers. Even if Puzder is indeed having “second thoughts” about joining the Labor Department, as was reported recently, his replacement may not have a significantly different stance.

Puzder is scheduled for a Senate confirmation hearing on Feb. 9. He has yet to say how he intends to deal with his stark conflict of interest issues should be become the next labor secretary.