If you're hearing R.E.M. on the radio for the firs time today you could be forgiven for thinking they lack politics 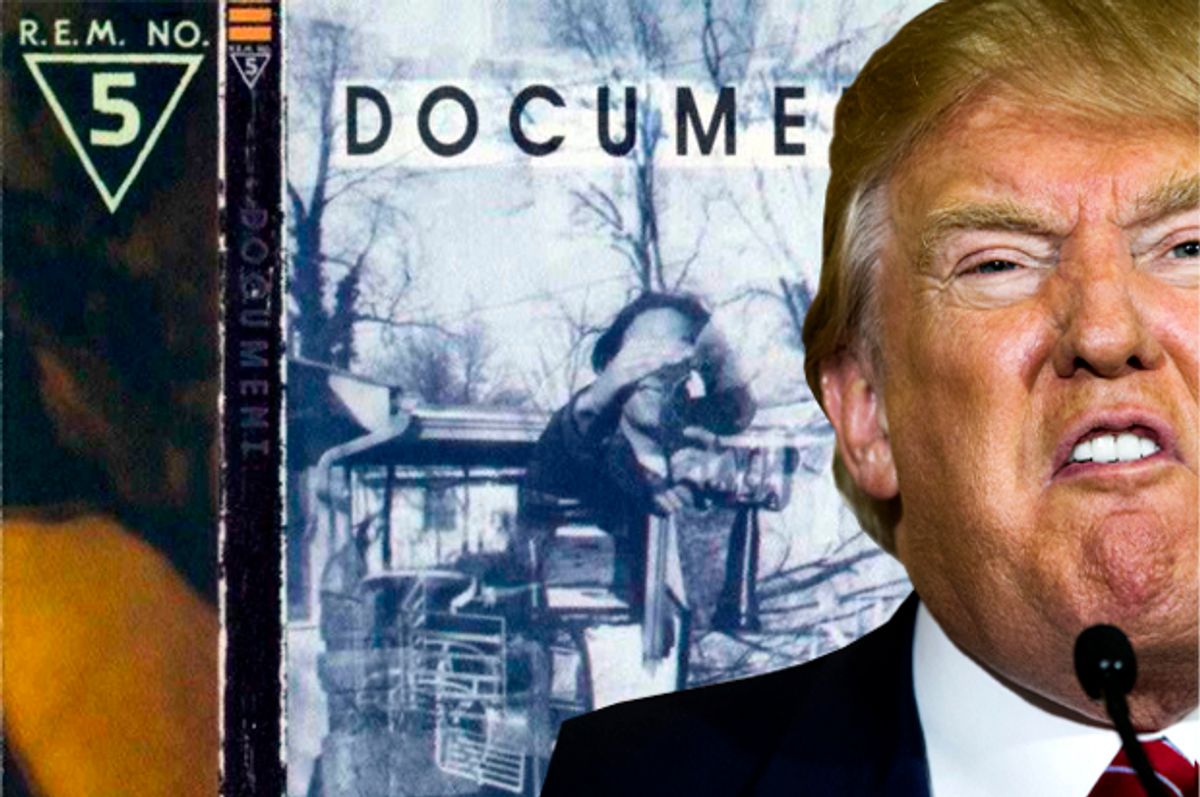 On Jan. 20, Paste ran a clever article titled "An Inaugural Day Message via the Words of R.E.M." The piece creates a narrative about politics and life by jumbling together and rearranging phrases culled from the Athens, Georgia, band's song lyrics. Workload-wise, the 2400-word piece is impressive; mixing and matching sentiments from a 30-plus-year career certainly isn't easy.

From a thematic standpoint, the article also seems remarkably true to the ongoing nationwide pendulum swing between hope ("There are 40,000 reasons for living. The first starts with someone, and that someone is you") and despair ("Where to turn? There’s no one left to take the lead. The story is a sad one, told many times. I’m not sure where we’re headed, but I’m very scared for this world").

More than anything, the Paste article illustrates how thoroughly R.E.M. chronicled the geopolitical landscape before its 2011 breakup. Out of all of the band's releases, however, 1987's "Document" feels especially applicable to America in 2017.

The last record R.E.M. released via I.R.S. Records — and the first LP the band recorded with producer Scott Litt — "Document" addresses the corrupting nature of money; political witch hunts concerning free speech; circumstances that are both bewildering and unprecedented; and economic and employment oppression. Appropriately, the record's music is glinting and electrified, and nods to post-punk, folk, funk and fiery rock 'n' roll.

“It’s a sideways look at the world and us," guitarist Peter Buck said of the album in a 1987 Melody Maker interview. "It has a kind of Orwellian wry humour. It’s not that we’re making light of America, it’s just that I can’t look at it the way Bruce Springsteen does. To me, America in 1987 is Disney World." (In fact, it emerged years later that a potential title for "Document" was reportedly "Last Train to Disneyworld.")

On "Document," R.E.M.'s take on the country is indeed a mixture of absurdity and brutality. "Welcome to the Occupation" pulls no punches as it addresses U.S. involvement in Central America, although some of its lyrics ("Listen to the Congress where we propagate confusion/Primitive and wild") could have modern interpretations. The jaunty "Exhuming McCarthy" uses sharp horns and a marching band-like tempo to address the comeback of the baseless character assassination. For added emphasis, the song even features archival audio footage from the 1954 hearings between Senator Joe McCarthy and the Army.

"Document" also leaves room for mystery and metaphor, however. The psychedelic-kissed "King of Birds" wields insightful aphorisms ("Standing on the shoulders of giants leaves me cold," "I am king of all I see, my kingdom for a voice") to explore the intersection of knowledge accumulation, leadership power and historical oppression.

And then there's the rapid-fire "It's the End of the World as We Know It (And I Feel Fine)," a song about "bombastic, vomiting sensory overload," vocalist Michael Stipe told Rolling Stone in 1987. Back then, the song functioned as an indictment of a quick-cut, whiplash-inducing media approach; today, its dizzying verses are as warp-speed as online culture and the compressed news cycle.

Unsurprisingly, "Document" emerged during a time of worldwide political and social upheaval, as well as anger toward the American government. Both Wall Street greed and the Iran-Iraq war continued to rage, while president Ronald Reagan's mishandling of the Iran-Contra affair dominated during the early part of the year. “All you have to do is turn on the TV,” Buck said in a separate interview back then, “and you’re inundated with complete lies from people who are supposed to be running the country.”

The latter quote feels eerily prescient, if not contemporary — as do many sentiments expressed by the band then. Back in 1987, bassist Mike Mills told The Globe and Mail that "Michael [Stipe] is really concerned — we all are — about this neo-conservative wave in America. With all the repression of personal freedoms, the knee-jerk reactionism, it’s the sort of atmosphere old Joe [McCarthy] would fit well into, hence the song." In 2003, Stipe admitted that "Disturbance at the Heron House" is his "take" on George Orwell's "Animal Farm."

"That song is so fucking political, and it’s so appropriate to what's going on right now," he told Filter. "Like, the kind of arrogance that some of the policy makers and world leaders are carrying with them right now is, I think, reflective of the very worst of the United States. It’s that teenage arrogance, as a young country, the know-it-all-kind of thing. That makes me crazy."

Thirty years later, it's somewhat horrifying to feel like history is repeating itself. In that sense, R.E.M.'s "Document" is more important than ever. Its righteous anger and blunt condemnations are inspiring, comforting and engaging — a blueprint for forward motion when everything in the world seems untethered and chaotic. "Document" is a grounding, centering presence.

In fact, R.E.M.'s continued political activism and outspokenness also feels crucial. To this day, the group's website and social media channels reflect causes and values espoused by the band members. "It's the End of the World as We Know It (And I Feel Fine)" has even been adopted in some circles as a reaction to this past election; Stipe, for one, quoted the song's chorus across several Instagram posts last week.

What's interesting (if not somewhat frustrating) is that casual listeners or new fans of the group may not be completely aware of R.E.M.'s fierce political orientation. Take radio, one of the major ways people still encounter the band on a daily basis. According to statistics kept by Nielsen BDSradio, the five most-played R.E.M. songs on the airwaves between January 17-23 were (in this order) "Losing My Religion," "The One I Love," "It's the End of the World as We Know It," "Stand" and "Man on the Moon."

Taken together, these five tunes show the breadth of the band's sonic range. Thematically, however, the songs aren't overtly political — with the possible exception of "Stand," a deceptively basic song "about making decisions and actually living your life rather than letting it happen," as frontman Michael Stipe once told Q. In other words, "Stand" can very much serve as a rallying cry to get involved locally.

At least where radio is concerned, the version of R.E.M. many see in 2017 is a far different band than the one people grew up with in the '80s, '90s and '00s. That's not a unique phenomenon: Historical revisionism has changed the perception of plenty of bands. However, this phenomenon does no favors to R.E.M., particularly where the band's depth is concerned. For example, "there’s a lot of whimsical humor and irony in Michael’s writing that we don’t really get credit for," Mills told the Globe and Mail in 1987. "I think people miss that a lot of the stuff we do is partly tongue-in-cheek."

The way R.E.M. always balanced emotional levity and political commentary feels like a useful survival mechanism, one that deserves to be excavated and updated for the modern world. As online debates seethe over political memes and mocking hashtags — and whether such sardonic humor softens the severity of what's going on or is simply a way to cope — finding such equilibrium is an imperative.

In the end, it's poignant that "Document" starts with the aggressive "Finest Worksong," whose very first line is the rabble-rousing cry "The time to rise has been engaged." More than anything, the album urges people to stay motivated, and to speak up and take action — timeless advice that feels more vital than ever.