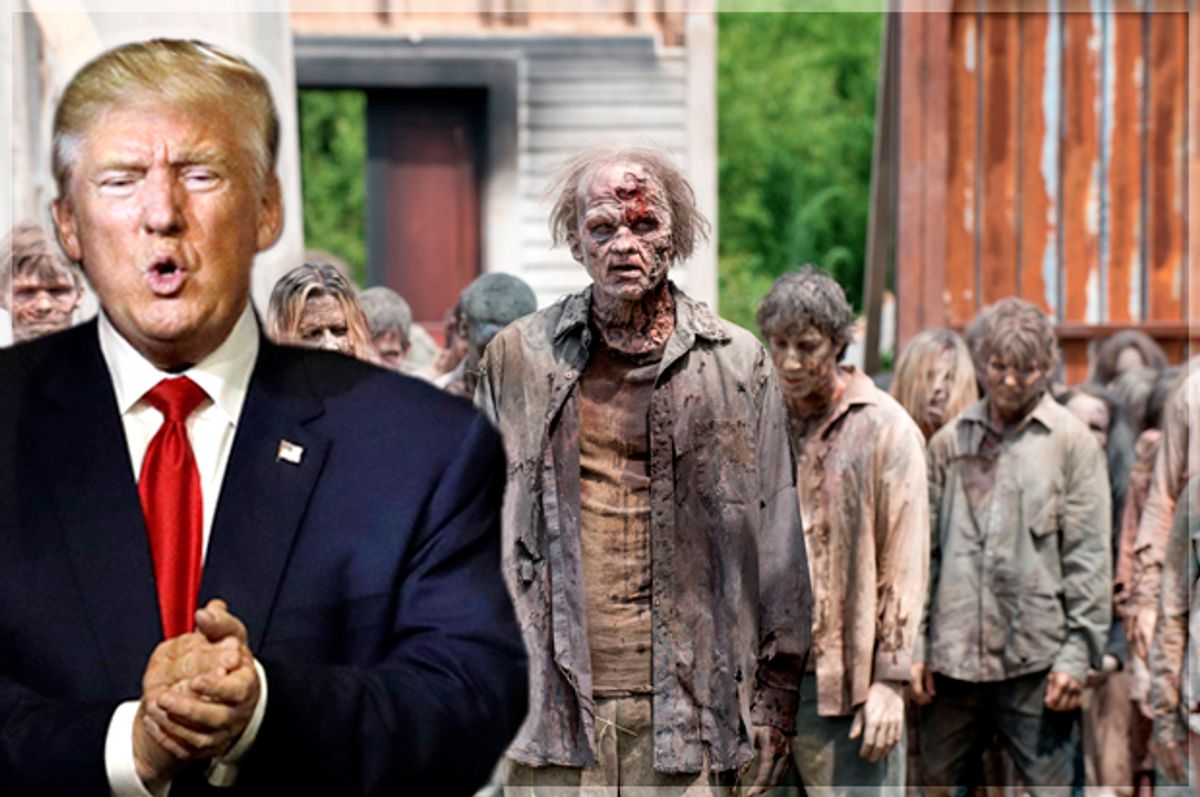 A president's inaugural address is an opportunity to assess the present and also provide political vision and goals for the future. By those standards, Donald Trump's speech last Friday was in many ways unprecedented. His view of America's present is one where the country is a ruinous hellscape of dismay and disaster whose best years are behind it. This pessimism does not fit with a traditional vision of the United States as either a "shining city on the hill" or the world's "greatest democracy."

Consider the words Trump used in that speech, which included "carnage," "bleed," "disrepair," "rusted," "sad" and "tombstones." Women and children have been "trapped in poverty," he told us, while we have wasted "trillions of dollars" overseas. Such language has never been spoken by an American president in his inaugural speech. This is part of a broader strategy: Because he is a demagogue and (as I have previously contended) a fascist, Trump must present America as broken and on the verge of imminent destruction so that he can play the savior. Terror and fear are Trump's primary political tools. Those are the things, along with meddling by Russia and its agents, that won him the White House.

There is another important dimension to Donald Trump's apocalyptic worldview and resulting political strategy that has not received the attention it deserves. In a recent interview with Forbes, Jared Kushner (Trump's son-in-law, and now a senior White House adviser) shared the following insight:

This wasn't a completely raw startup. Kushner's crew was able to tap into the Republican National Committee's data machine, and it hired targeting partners like Cambridge Analytica to map voter universes and identify which parts of the Trump platform mattered most: trade, immigration or change. Tools like Deep Root drove the scaled-back TV ad spending by identifying shows popular with specific voter blocks in specific regions -- say, "NCIS" for anti-ObamaCare voters or "The Walking Dead" for people worried about immigration. Kushner built a custom geo-location tool that plotted the location density of about 20 voter types over a live Google Maps interface.

"The Walking Dead" is a comic book and TV series (in the interest of full disclosure, I am a fan of both) that follows the struggles of its main characters as they try to survive in a world overrun with the living dead. It addresses personal and existential questions -- what does it mean to be human and to form a community in such a world? Are human beings inherently good? What to do in the absence of government when life appears to be "nasty, brutish, and short"?

"The Walking Dead" also explores themes of power, resource scarcity and violence. Because it is a product of this moment in American society, the show is also a space where values and cultural habits such as toxic (white) masculinity, a worship of guns and gun violence, distrust of government, and racism -- sometimes critically interrogated and at other times casually reproduced -- are present as well.

Donald Trump's political imagination is a near-analogue of the world of "The Walking Dead."

Donald Trump's "Walking Dead" politics are fixated on guns and vigilantism. Trump himself even bragged about being able to shoot someone in public without driving away his voters.

Donald Trump's "Walking Dead" politics view the stranger and the outsider as a persistent threat. Trump's flesh-eating zombies are Muslims, Mexicans and Latinos, Arabs, African-Americans, "illegal aliens" and "terrorists" on whom he wants to unleash his "law and order" Terror Dome.

Donald Trump's apocalyptic and dystopian political vision would not have won him the White House if there were not many millions of (white) Republican and other conservative voters who also share those beliefs and fears. This is a function of biology and psychology.

Conservative-authoritarians also have a high intolerance for ambiguity. They prefer simple answers and moral clarity instead of complexity and nuance. Socialization through the right-wing news media, Christian evangelical and "dominionist" religious beliefs, family and community all combine to reinforce Trump voters' attraction to pessimistic, dystopian and eschatological or "end times" thinking.

Perhaps most disturbing, Donald Trump's "Walking Dead" politics and the world it represents are in many ways as much a fantasy for his voters as they are a threat.

George A. Romero is a true American original, and the filmmaker most responsible for today's zombie horror genre. In the 1968 classic "Night of the Living Dead," Romero showed viewers that the zombie is not the most dangerous part of an apocalyptic world where the dead have come back to eat our brains. Rather, it is the living who take that moment of crisis and manifest the worst parts of human nature.

In that spirit, Donald Trump's presidency is likely to be a real-life horror movie for many millions of Americans, as well as people around the world. What Trump and his minions do not understand is that unlike in "The Walking Dead" or a Romero film, their enemies are not mindless automatons. We think. We resist. We organize. We struggle. And yes, we fight back.