Support for Trump on immigration flags: Syrians, including refugees, not allowed to enter US

By ALICIA A. CALDWELL - KEN THOMAS 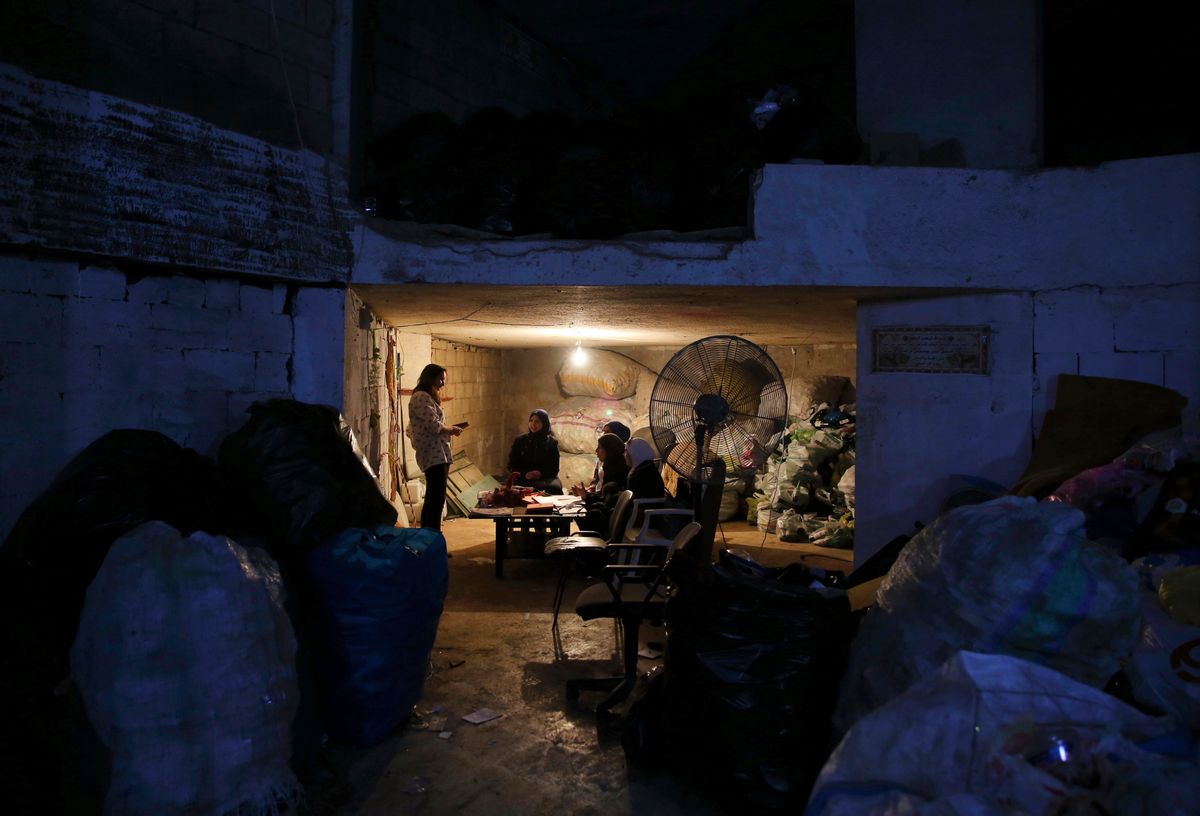 In this Friday, Oct. 28, 2016 photo, Syrian refugee Haela Kalawi, 31, second left, and fellow Syrian refugees sit on a sofa surrounded by the garbage as they attend an English class at Recycle Beirut, their work place in Ouzai, a poor neighborhood in the Lebanese capital of Beirut. About one-third of 240,000 Syrian refugee households in Lebanon are headed by women, in stark contrast to Syria's traditions which see men as providers and protectors. The husbands of the women surviving on their own are either dead, missing, chose to remain in Syria or tried to make their way to Europe. (AP Photo/Bilal Hussein) (AP)
--

WASHINGTON — The fallout grew Saturday from President Donald Trump's immigration crackdown as U.S. legal permanent residents and visa-holders from seven Muslim-majority countries who had left the United States found they could not return for 90 days.

It was a period of limbo for an unknown number of non-American citizens from Iraq, Syria, Iran, Sudan, Libya, Somalia or Yemen now barred from the country where they were studying or had lived, perhaps for years.

A federal law enforcement official who confirmed the temporary ban said there was an exemption for foreigners whose entry is in the U.S. national interest. It was not immediately clear how that exemption might be applied.

Those already in the U.S. with a visa or green card will be allowed to stay, according to the official, who wasn't authorized to publicly discuss the details of how Trump's order was being put in place and spoke only on condition of anonymity.

Customs and Border Protection was notifying airlines about passengers whose visas had been canceled or legal residents scheduled to fly back to the U.S. Airlines were being told to keep them off those flights.

Trump's order barred all refugees from entering the U.S. for four months, and indefinitely halted any from Syria. He said the ban was needed to keep out "radical Islamic terrorists."

The next group of refugees was due to arrive in the U.S. on Monday, but the official said they would not be allowed into the country.

The president's order immediately suspended for four months a program that last year resettled in the U.S. roughly 85,000 people displaced by war, political oppression, hunger and religious prejudice. An immediately 90-day ban was put in place for all immigration to the U.S. from the seven Muslim majority nations.

Trump's order singled out Syrians for the most aggressive ban, ordering that anyone from that country, including those fleeing civil war, are indefinitely blocked from coming to the U.S.

"We want to ensure that we are not admitting into our country the very threats our soldiers are fighting overseas," Trump said as he signed the order at the Pentagon. "We only want to admit those into our country who will support our country and love deeply our people."

Trump's ban on asylum-seekers came down even as Iraqis endangered by work for the United States in their home country were midflight to their hoped-for refuge in the United States. As a result, they and countless other refugees, their families and aid workers scrambled Saturday as Muslim travelers were turned back on arrival at U.S. airports or blocked from boarding flights to America.

Organizations including the International Refugees Assistance Project, which helps former Iraqi translators for the U.S. military and other refugees seeking entry to the United States, and other organizations aiding asylum-seekers, rushed translators and lawyers to airports to try to help U.S.-approved asylum-seekers already on their way to the country as Trump's ban came down.

"I've got one arriving at JFK in 10 minutes. We'll see how that goes," Becca Heller, director of that refugee group, said Friday night about one man on his way. He is the Iraqi husband of a woman who had fled to the United States recently to escape threats to her life over her work for U.S. officials in Iraq.

Trump said the halt in the refugee program was necessary to give agencies time to develop a stricter screening system. While the order did not spell out what additional steps he wants the departments of Homeland Security and State to take, the president directed officials to review the refugee application and approval process and find any more measures that could prevent those who pose a threat from using the refugee program.

The U.S. may admit refugees on a case-by-case basis during the freeze, and the government will continue to process requests from people claiming religious persecution, "provided that the religion of the individual is a minority religion in the individual's country."

In an interview with CBN News, Trump said persecuted Christians would be given priority in applying for refugee status.

As a candidate, Trump called for a temporary ban on all Muslim immigration to the U.S. He later shifted his focus to putting in place "extreme vetting" procedures to screen people coming to the U.S. from countries with terrorism ties.

The Council on American-Islamic Relations said it would challenge the constitutionality of the executive order.

"There is no evidence that refugees — the most thoroughly vetted of all people entering our nation — are a threat to national security," Lena F. Masri, the group's national litigation director. "This is an order that is based on bigotry, not reality."

During the past budget year, the U.S. accepted 84,995 refugees, including 12,587 people from Syria. President Barack Obama had set the refugee limit for this budget year at 110,000.

According to Trump's executive order, he plans to cut that to 50,000. Refugee processing was suspended in the immediate aftermath of the Sept. 11 attacks and restarted months later.

Follow Ken Thomas at http://twitter.com/kthomasDC and Alicia A. Caldwell at www.twitter.com/acaldwellap

By ALICIA A. CALDWELL

MORE FROM ALICIA A. CALDWELL