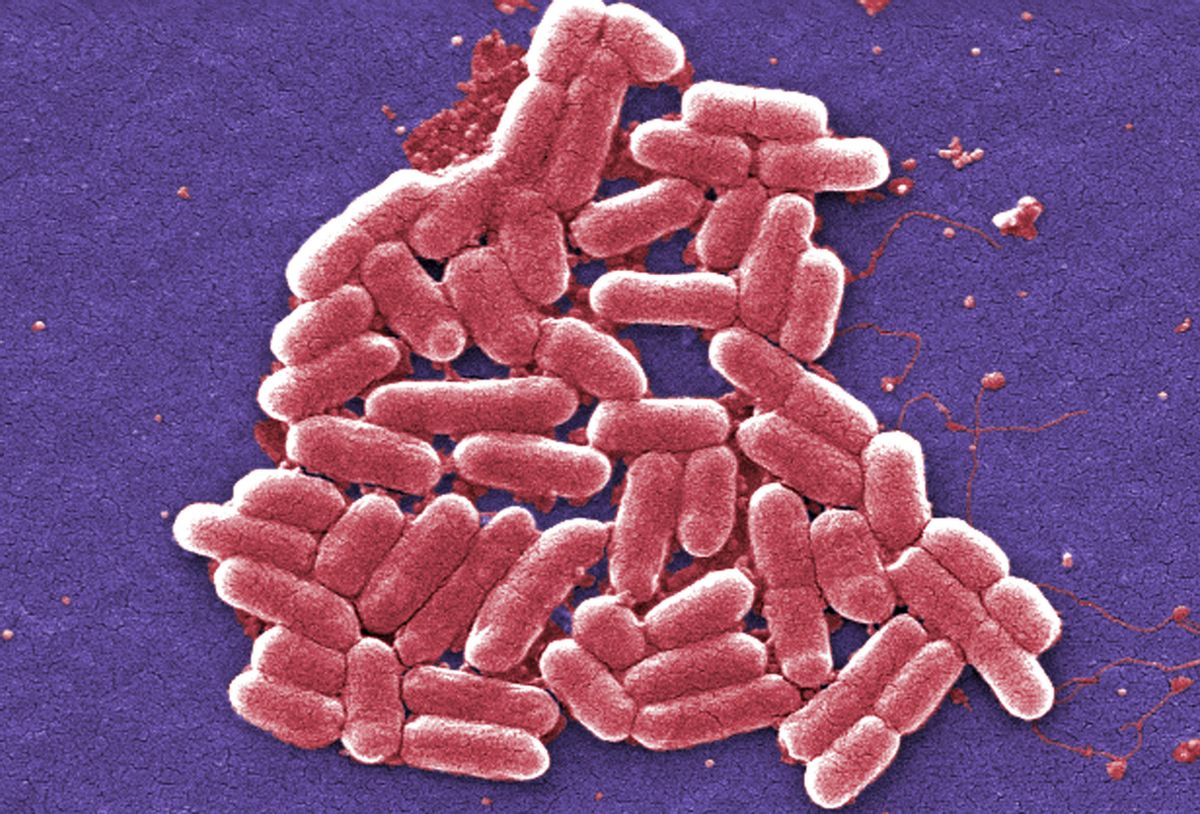 This 2006 colorized scanning electron micrograph image made available by the Centers for Disease Control and Prevention shows the O157:H7 strain of the E. coli bacteria. New research suggests that a worrying number of people in China are infected with bacteria resistant to an antibiotic used as a last resort. Researchers examined more than 17,000 samples from patients with infections of common bacteria found in the gut, in two hospitals in China’s Zhejiang and Guangdong provinces, over eight years. About 1 percent of those samples were resistant to colistin, often considered the last option in antibiotics. The study was published Friday, Jan. 27, 2017 in the journal, Lancet. (Janice Carr/CDC via AP) (AP)
--

New research suggests a worrying number of people in China may be infected with bacteria resistant to an antibiotic used as a last resort.

Researchers examined more than 17,000 samples from patients with infections of common bacteria found in the gut, in two hospitals in China's Zhejiang and Guangdong provinces, over eight years. About 1 percent of those samples were resistant to colistin, often considered the last option in antibiotics.

The study, published Friday in the Lancet journal, is one of the first to document the extent of drug-resistant infections in more than one Chinese province.

For decades, China has used colistin in its agriculture industry to speed animals' growth, but the drug was not used in people. Scientists say the latest work is further evidence that overuse in animals can spread to people. Chinese officials earlier this year approved colistin for use in hospitals, raising fears that it could worsen the resistance problem.

"It will be very important to ration its use so that it's only used when absolutely nothing else will work," said Mark Enright, a professor of medical microbiology at Manchester Metropolitan University, who was not part of the research.

Health officials have long worried that colistin-resistant bacteria might spread more widely, setting the stage for superbug infections that would theoretically be impervious to medications. Only a small number of such cases worldwide have been detected, including in the U.S.

Rising concerns over drug-resistant germs have prompted the United Nations to encourage countries to cut back on antibiotic use and develop new medicines.

People infected with these resistant strains can usually be treated with current antibiotics, but doctors warn that as these bacteria — which are already untreatable with last-resort drugs — acquire resistance to current drugs, the infections may become impossible to treat.

Experts also noted a surprise: the apparent ease with which the resistant gene spread between bacteria, including different species of bugs.

"It now looks like there's potential for the resistance gene to move around and spread between different species of bacteria," said Nigel Brown, a spokesman for Britain's Microbiology Society, adding that it could lead to a jump in infections.

In a separate study also published in the Lancet, another group of Chinese researchers analyzed samples from patients with blood infections at 28 hospitals. About 1 percent had the colistin-resistant gene — a much higher figure than would be expected in developed countries.

Colistin's use in hospitals should be restricted to avoid problems, said Yunsong Yu, one of the study's authors.

"This is a warning shot about the possible scenario where we don't have very much left in the armory to treat (bacterial) infections," said Brown. "I don't think we are very close to that happening, but it is a remote possibility if we aren't careful about how we use our antibiotics."