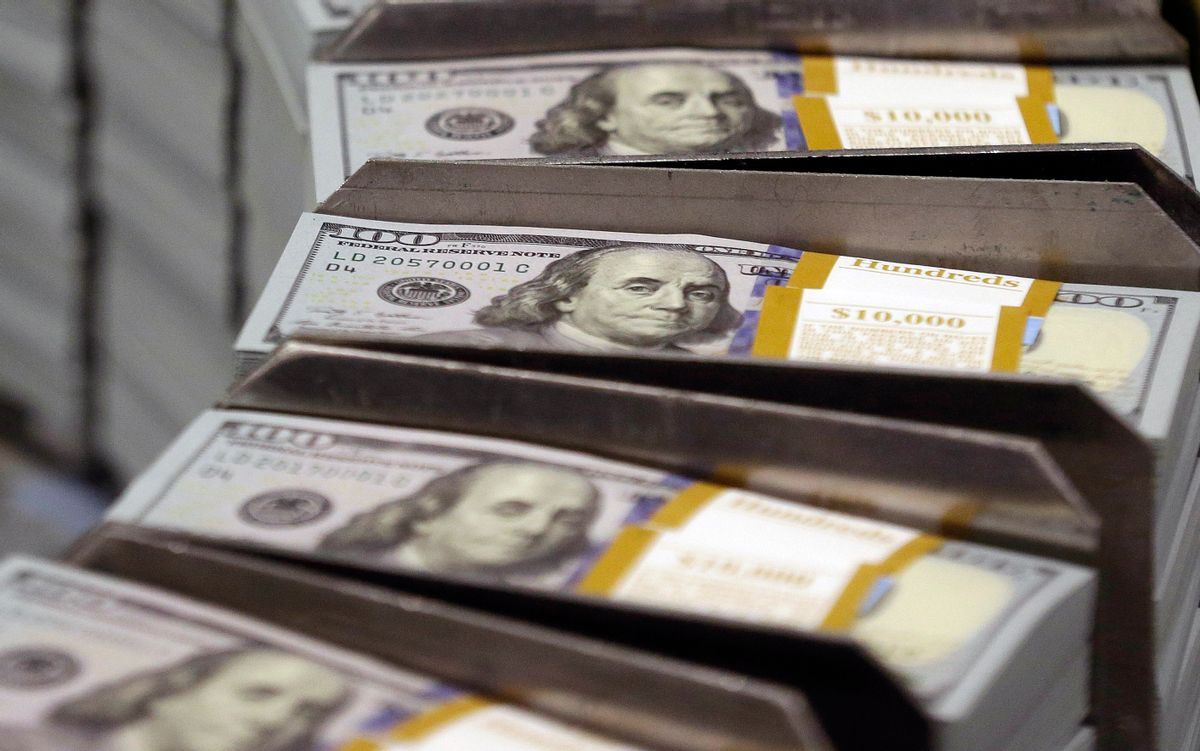 It's no surprise that President Donald Trump believes strongly that society is best served under the same principles that guide giant multinational companies. On Friday, the president announced his latest step toward turning America into America, Inc. by summoning some of the country’s top executives to participate in a Manufacturing Jobs Initiative, where the president learned "how best to promote job growth and get Americans back to work again.”

This may sound like fox-in-the-henhouse stuff to some; after all, corporations and the executives that steer them are focused on how to maximize profits and minimize costs for the benefit of shareholders. Executives naturally want tax breaks and fewer regulations. At the same time, these bosses are in charge of big organizations, like chipmaker Intel, U.S. Steel and Dow Chemical, so they know a few things about trade and manufacturing.

The announcement of the initiative comes amid the first quarterly corporate earnings season since the election. As of Friday, more than third of the companies listed on the broad S&P 500 index (the benchmark measure of corporate America’s health) have released the latest quarterly earnings reports for the current earnings season, including several of the companies advising the president.

The earnings announcements offer an opportunity to hear what some of the executives of the 25 major companies participating in the initiative are saying about many of the business issues Trump and Republican lawmakers have made top priorities, including foreign trade policy, corporate tax reform and manufacturing job growth. Here's what some of the executives said during earnings calls.

Ford Motor CEO Mark Fields: “We think that's really important to get a balanced outcome, balance between making sure that we reconcile interest in reducing carbon into the atmosphere which we're all for, but also with jobs, and also affordability for customers,”  he in a earnings call on Thursday.

This statement refers specifically to U.S. corporate average fuel economy regulations, which mandate that automakers should hit an average fuel efficiency target of 54 miles per gallon for the vehicles sold in the U.S. by 2025, up from last year’s average of 27.5 mpg. Automakers would love to see these regulations relaxed for two reasons: they earn more profit from SUVs and trucks are more profitable than small fuel-sipping sedans, and because squeezing ever-greater fuel economy while preserving gas-burning engine performance is an immense and costly engineering challenge.

Marillyn Hewson, chairwoman, president and CEO of Lockheed Martin: “There's some discussions around … eliminating the [defense spending] budget caps,” she said during a conference call on Tuesday. “Everyone that I speak to has recognized and certainly President Trump has recognized that it's something that needs to go away and we need to get on with spending the appropriate amount, having adequate budgets to support our national security.”

Trump has targeted Lockheed Martin, the world’s biggest defense contractor, for the costs associated with the F-35 fighter jet program -- the most expensive defense project in U.S. history which has already cost taxpayers $400 billion. Lockheed responded by pledging to lower ongoing costs and create 1,800 jobs in Fort Worth, Texas.

But Trump is also expected to boost military spending during his administration. On Friday he issued an executive order to boost the size of the U.S. military, already by far the world’s largest. The defense budget has been shaved in recent years, largely due to a scale-down of U.S. military presence in Iraq and Afghanistan. Defense hawks have decried the scale back in spending as a threat to national security and Lockheed Martin, one of the biggest beneficiaries of U.S. defense spending, is on board with piling more public funds into defense spending, which took up more than half of the $1.1 trillion in U.S. discretionary spending and about 16 percent of all federal outlays in 2015, according to a National Priorities Project analysis of White House Office of Management and Budget data.

Dennis Muilenburg, chairman, president and CEO of Boeing: “We all understand that a productive and healthy relationship with China is key,” Muilenburg said during a quarterly earnings conference call on Wednesday, expressing confidence that Trump understandss what’s at stake for the world’s largest aerospace company and leading manufacturer of commercial jets. “It is important that we'd be able to compete and win in China and to be a partner there as they grow their aerospace industry.”

Boeing is one of the U.S. companies that has the most to lose if Trump fulfills his pledge to slap a 45 percent tariff on Chinese-made goods, an aggressive move that would elicit retaliatory measures from the world’s second largest economy. The global commercial airline market is expected by the company to add 39,000 aircraft over the next two decades, including 6,800 for China alone. China could shift aircraft orders to Boeing’s main rival, Airbus, as part of a trade war, severely impacting Boeing’s future revenue. As he did with Lockheed Martin, Trump lashed out at Boeing for the costs of the next Boeing 747 presidential jet, which led Muilenburg to pledge price reduction.

We want all of the proposed tax breaks. . .

Jeff Bornstein, chief financial officer of industrial conglomerate GE: “What GE wants and what we think is most important to competitiveness for U.S. companies is essentially a competitive tax rate, something that looks more like the OECD averages, which is just roughly 21 percent, 22 percent,” he said during a conference call with investors on Jan. 20, referring to the 35 advanced economies of the Organisation for Economic Co-operation and Development.

Bornstein, whose boss Jeff Immelt is participating in Trump’s Manufacturing Jobs Initiative, said GE also backs Trump’s proposed tax amnesty that would give companies that (legally) hoard global profits in foreign tax havens a one-time 10 percent tax rate to bring that money back to the U.S.

Though the U.S. corporate tax rate of 35 percent is indeed higher than other industrialized economies; it doesn’t mean companies pay that rate. They have numerous ways to reduce their federal corporate tax bills. GE is particularly notorious for this. It paid an average of 0.4 percent from 2005 to 2014, according to an analysis for GE’s regulatory filings by Citizens for Tax Justice, which has called GE “a champion tax dodger.” Republicans are proposing a drop in the headline corporate tax rate from 35 percent to 20 percent, which could make it much easier for companies to chip away at what they wind up paying the Internal Revenue Service.

We like our manufacturing to be close to our customers . . .

Wendell Weeks, chairman and CEO of Corning, maker of specialty glass and ceramics used by other manufacturers: “We think it is just good business practice to be close to your customers, as well as responsible business practice,” he said in an earnings conference call on Tuesday. “If we see some significant onshoring of our customers' production capabilities, we do have the capability to flexibly react to that.”

Weeks insinuated Corning would fall in line, should the companies that use Corning's products -- including Gorilla glass used on smartphones and Pyrex laboratory glassware -- bring more manufacturing jobs to the U.S. Currently, the company derives only about a fourth of its sales revenue in the U.S. while about 35 percent of its workers are in the U.S. The company has announced plans to invest $10 billion in the next two years expanding globally.

We’re getting slammed by foreign dumping of home appliances. . .

Jeff Fettig, chairman and CEO of Whirlpool: “We also have been a victim, if you will, of illegal dumping for a long period of time in the U.S. appliance business,” he said during a quarterly earnings conference call Thursday. “In terms of the new administration asking input from U.S. manufacturers, the things really are about, how do we ensure that American manufacturer is competitive? How do we create good new jobs in manufacturing? And what kind of inputs could – in terms of specific, whether it’s around regulations or trade or taxes, would help American manufacturers not only be competitive, but also be able to add new jobs?”

Whirlpool, which has significant manufacturing footprints in the Trump-won states of Ohio and Michigan, has complained about price pressure from Chinese-made washing machines imported to the United States by Korean manufacturers Samsung and LG. Last year it won a trade complaint case against its foreign rivals that led to punitive import tariffs on these foreign made washing machines. Such moves typically lead to price increases on American consumers, but they also help protect U.S. manufacturing jobs.

Whirlpool, whose brands include Maytag and Kitchen Aide, announced major layoffs in North America and Europe in 2011, equivalent to 10 percent of its workforce in those regions. The company has nearly 100,000 employees globally and said more than 80 percent of what it sells in the U.S. is manufactured locally. It’s one of the companies that would benefit from protective tariffs on the import of Chinese made goods, but this could also raise prices to U.S. consumers.