Barrier between the modern world and me: No man in my family has ever dared shave his beard — until now 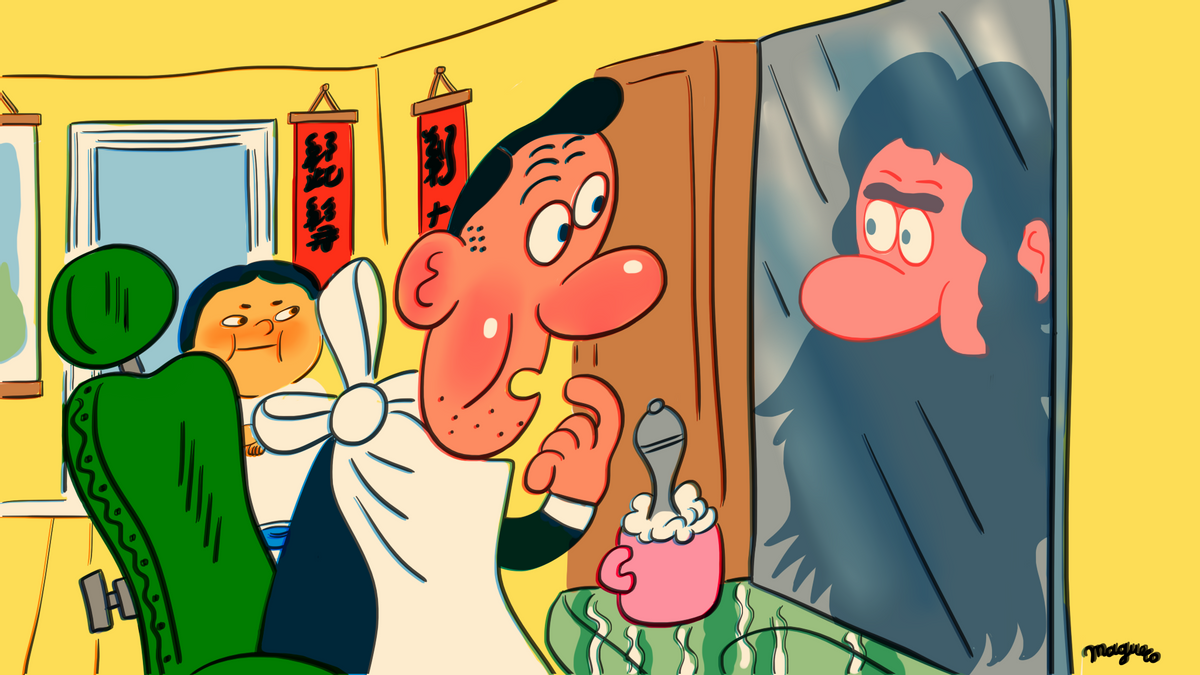 I handed the barber a twenty-dollar bill and asked him to trim my beard. I was 26 years old, and the hairs on my chin had never been touched by a blade. The barber, a middle-aged Chinese man with long wavy hair, strong hands and a no-nonsense demeanor, took out a large electric razor and began hacking away as if he was clearing a path through a forest.

Every motion of his hand felt like another stab to my heart. I wanted to lose the beard, but that didn’t make it less painful to let go of this part of my identity, my history, my tradition. To shave is considered a grave sin in the Hasidic Brooklyn community where I was raised. Every man I knew had a fully-grown beard.

More from Narratively: "The Extravagant Pair of Shoes That Brought Me Out of Mourning"

Since my first day of college four years earlier, I had wanted to crawl out of my Hasidic enclave in Crown Heights and join the larger society. But my beard created barriers. The co-eds around me took me for the campus religious director and not the Knicks and Mets fan I was.

More from Narratively: "The Day Our Daughter Got Hit"

Day after day, the world saw a Hasidic man, but inside I felt like a modern Jew. Whereas the Hasidic beard reflected the acceptance of age-old traditions and customs, however out of step with contemporary society, I wanted to embrace the modern world, with its scientific advancements and culture. But the fear of shaming my parents was too much to bear, so I suffered in silence. For four years I kept my beard intact, the dutiful son, all the while thinking about how it was holding me back.

One late night, during my last semester at Touro College, I lay in bed curled up with Plato’s "Republic," furtively trying to get through the reading assignment for the next day’s political science class. As I struggled to keep my eyes open, I started reading Plato’s famous cave allegory, in which the philosopher describes men who live their whole lives in a cave, seeing only shadows of the world outside. Despite the late hour, I was jolted awake. I couldn’t believe what was in front of my eyes. It dawned on me — I was no better than those prisoners in Plato’s cave! I may have been attending college, but I came home every night to a Hasidic cave. I wanted to jump out of bed and run upstairs to inform my parents and siblings that I couldn’t live in the cave anymore, but as it was 2 a.m., I decided it wasn’t the time to make grand proclamations. I tried to fall asleep, but couldn’t. My new clarity was overwhelming. After twisting and turning for an hour, I finally dozed off.

By the time I woke up the next morning, I knew my beard had to come off. But going to a barbershop in our Brooklyn neighborhood wasn’t an option — too close to home. I had to get away, and far. But where? Taking my cue from the Talmud’s advice to one who plans on committing a sin — "Go to a place where  you’re not known" — I planned a trip to visit my aunt in San Francisco for the summer, not telling anyone my true motivation for getting three thousand miles away from home.

I planned my getaway for the day following my college graduation. On the afternoon of my departure, I said one last goodbye to my family. We sat in the living room, me on one couch, my parents and seven siblings across from me. They sat there as a sort of tribunal. My fate seemed to rest in their hands. It felt like the air in the room was sucked out.

I knew if I told my family the real reason why I was flying to San Francisco, they would surely block the front door and not allow me to leave. So, I hemmed and hawed. I told them I needed a break after so many tests at college; I had to clear my head. The girls kept their heads down, solemnly staring at the floor, while my brothers stared straight at me, all the while thinking this could be them in a year or two. My mother looked at me with knitted brows, bewildered. My father, always the practical one in the family, asked whether I packed enough kosher frozen meals for the summer.

As I stood up to leave, my father came toward me to shake my hand. Haltingly, he walked the few steps from his side of the room, as if he was trying to hold off my departure for as long as possible. His face looked ashen and scared. Despite it going unspoken, he must have sensed that San Francisco was about more than just a post-graduation trip for some sun. I reached out to shake his hand, hesitantly. As our hands locked together, I thought to myself, maybe just forget about the flight. Forget about San Francisco. Do I really have to disappoint everyone around me? But the sound of the taxi’s horn forced me out the door.

After settling in at my aunt’s Victorian house, on the edge of the Presidio Park and the splendid Sea Cliff neighborhood, within walking distance of the Golden Gate Bridge, I began searching for a barbershop where I could carry out my mission. I walked for about an hour up and down the main drag, Geary Boulevard, peeking into each barbershop and salon I passed. None of them seemed like the right one; some were too crowded, some were dim, and others seemed more like tattoo parlors than barber shops. But as it was getting closer to closing time, I knew I had to choose one of them. Finally, I came upon a Chinese salon. Through the front window, I noticed four middle-aged women calmly waiting for their hair to dry. No one in the salon seemed to be speaking to each other; the women were sitting under hair-drying heat lamps, oblivious to what was going on around them, which allayed my fear of someone asking me why I wanted to shave. No one in the salon would have the slightest inkling as to the sin I was about to commit.

A man who I figured for the owner seemed to have just finished cutting someone’s hair, and stood waiting for his next customer. I decided then and there, this salon is perfect for my shave. I was sure. I didn’t know if the man with chiseled features, dark black eyes and dead-serious look on his face spoke English, but I only needed him to know one word: “Shave.”

With a heavy hand, I pushed open the front door and walked in. I asked the Chinese man if he did shaving. He said yes, and asked, “All off?” Unable to bring myself to verbalize my intention, I responded, “Well, shorter, just make shorter.” He understood and got to work.

I wanted to leap out of the chair and run, but I also wanted to stay right where I was. The more hair fell onto the white-tiled floor, the more committed I grew. There was no turning back. I sat slouched down, holding on to the chair’s armrests for dear life, desperately waiting for the operation to be over. As I sat there paralyzed, I heard the voice of my high school rebbe who once said, “So you think you don’t need a beard? You think you can be a good Jew without a beard? Trust me, your beard will keep you out of strip clubs! You will be ashamed to walk into such a place of tuma’ah!” The minutes felt like eternity.

Finally, the buzzing of the razor stopped. I heard silence. It was over. I opened my eyes and saw my whole face for the first time in years in the large wall-to-wall mirror in front of me. I couldn’t believe my eyes. I actually looked my own age. After so many years of seeing a black beard, the mirror reflected a face I didn’t recognize. I thought to myself, “Could this really be me?” It was exhilarating, and scary.

As I stared in shock at this strange man in front of me, the terror of facing my family took hold of me. How would I face my parents without a beard? They sent me to an all-Yiddish school for 22 years, precisely in order to separate me from the world. “In the world, but not of the world,” was seared into me after so many years in yeshiva. My beard was meant to keep this separation set in stone. Without my beard, going back home was not an option. But I knew that even if I didn’t have a home anymore, I was alive. I felt new opportunities opening up for me; and, finally, the ability to face the world as me, not as the person others wanted me to be.