Buying lies: If Hillary Clinton had spent a little more time with HGTV before the election she'd know what America really wanted

Stuck in a loveless mortgage from before 2008, it's easy to see what America is in for with Trump 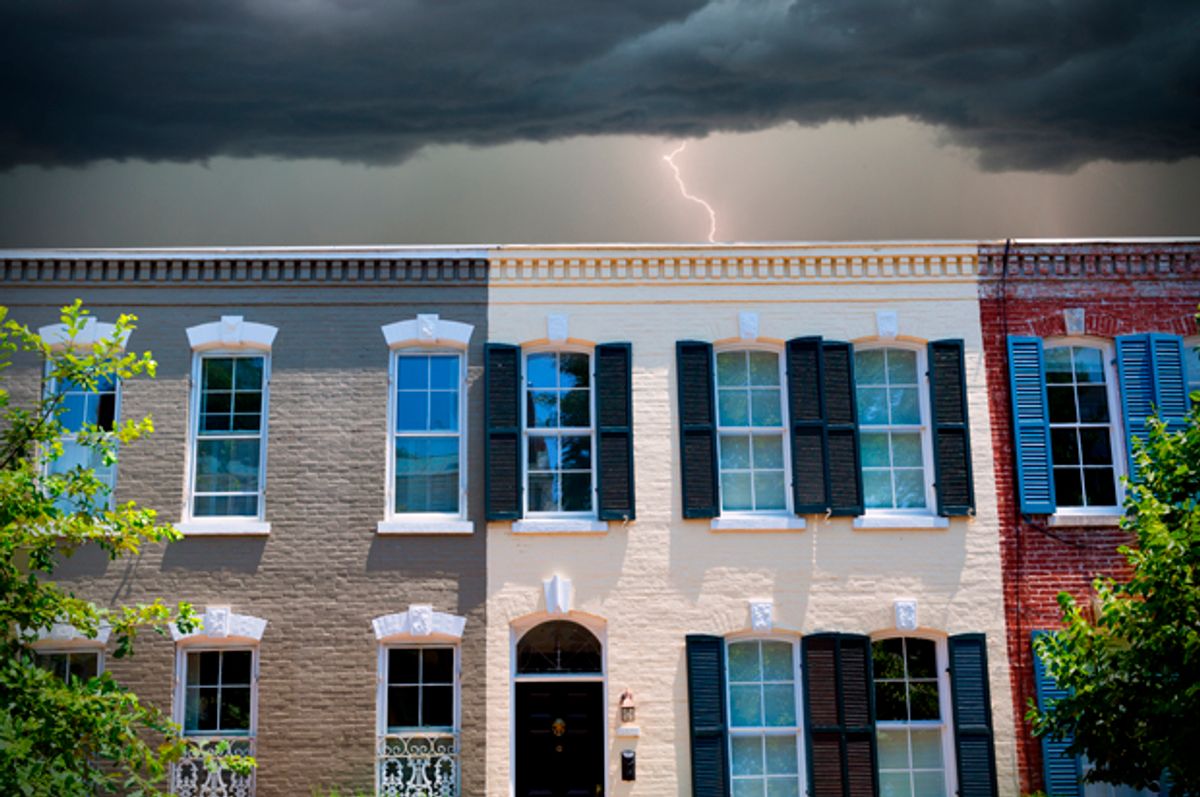 With Donald Trump now resident-in-chief at the White House — his own, high-class Embassy Suites between trips back to Trump Tower — I can’t help but wonder what Hillary Clinton is doing with herself. I imagine her at the family’s Dutch Colonial in Chappaqua, stretched out on the couch binging on Home & Garden Television’s “Love It or List It” and “Beachfront Bargain Hunt,” favorites she recently described in Bloomberg as “relaxing, entertaining and informative.”

I'm not sure about the "relaxing" part — I find the shows unsettling. But if Clinton had watched more of the No. 3 cable channel's house-buying and renovation shows, the story they tell about America might have helped her craft a winning campaign message, and she’d be the one hanging new (not gold) drapes in the Oval Office.

The real-life people featured on HGTV say their priorities in choosing where to live are location, size and price, but invariably they settle on the place that’s farther from their jobs or family than they wanted, and blow up their seemingly set-in-stone budget. They accept fewer bedrooms than they need for the perk of a swimming pool or a bigger kitchen.

People do these things because the human mind is not always rational. It’s emotional, and our emotions can run so strong that we don’t always recognize what’s in our self-interest. It’s apparently such a well-known phenomenon in real estate circles that realtors have a name for it: “buyer’s lies.”

I experienced this firsthand, 12 years ago. My husband, Ralph, and I sold the Washington, D.C., townhouse that we had renovated down to the studs for a ramshackle hundred-year-old, four-story affair with gold Formica countertops in the kitchen and a bathroom done in mauve tile from the ’70s.

We did it because the replacement house was twice the size of our beloved original, and we wanted to live on a hill instead of in a gully. I can no longer remember why we thought our family of four needed six bedrooms or what advantage we thought the higher ground would offer. Maybe, as I used to joke back when we were making the decision to move, we just craved chaos, because why else were we uprooting ourselves to move three blocks up the street. The first night we slept there, I turned to Ralph in bed and asked, “Will we ever get used to this house?”

Now I know the answer.

We overthrew our comfy setup for the unknown, just as nearly 63 million voters scorned the opportunity on Election Day to stay the course, to take incremental steps, to tweak only what needed changing. That would have been a vote for Clinton. Instead, in electing Trump, the country chose the human equivalent of a McMansion — a dismally proportioned mash-up of architectural styles, with a hodgepodge of windows and turrets, a six-car garage, a foyer designed for a giant, heated floors throughout, a kitchen with an island, peninsula, and umpteen dishwashers and sinks, and, it almost goes without saying, a lot of gold plate. Yes, the bells and whistles are enthralling, but they come with hidden, and not-so-hidden, costs — the heating, the air-conditioning (think Carrier), the pool man, the gardener, the gold-plate refurbisher.

That’s what Ralph and I learned. Instead of a storybook ending, our house swap is an ongoing nightmare. It turns out that when we bought near the top of the market in 2005, just shy of the Great Recession, we were operating on an old set of assumptions.

We still believed that if bankers gave us a mortgage for our behemoth on the hill, it must be because they believed we could afford it. We didn’t realize that they were more like con artists, trying to unload mortgages on anyone naïve enough to bite, or that for two people in declining industries — journalism and photography — our earning potential had already topped out. Note: It's not just Trump supporters who lie to themselves. And it’s not only the rural working class that has unrealistic expectations and finds itself in precarious straits. Technology is displacing the urban professional class, too. Now the soaring Washington housing market has trapped us. We can sell what we have, but we cannot afford to downsize. We’ve already tapped what little equity we had.

If home is supposed to be a refuge, ours is a jail cell. We long ago shelved our plans for a new kitchen, or any other upgrades or repairs. We're just trying to make our mortgage payments. And DIY is out of the question. My 85-year-old mother calls Ralph and me "the least handy people she's ever met,” and it's true: we can’t even nail a picture on the wall so that it hangs straight.

But as we try to hold onto what we’ve got, things aren’t going our way. The bathtub on the third floor — the one in that hellish shade of purple — is cracked, and unusable. And the second-floor bathroom has a story of its own. The earthquake that damaged the Washington Monument and National Cathedral five years ago also cracked our pipes. Soon the kitchen ceiling just below it was bubbling with moisture. But that wasn't as much trouble as what happened days after we moved in, when the same ceiling crashed in, and the second-floor bath had to be taken down to the joists. It turned out that the previous owners had neglected to put in a shower pan.

My sister-in-law, who specializes in historic preservation, assures us that it takes a long time for a house to fall down, and I hope to God she’s right. One night last summer Ralph and I came home from dinner to find a section of the living room’s coffered plaster ceiling in a pile on the floor. Now we live with the exposed laths as if we’re a historic site trying to show visitors how early twentieth-century houses were built, and we pretend to overlook the bits of plaster dust that sift down every day. If Chicken Little lived in our house, he would be hiding under the table. Our next-door neighbor, a single woman in her seventies, who yelled at our son when he was 4 for hitting a baseball into her yard, and Ralph when he tried to rake her leaves, was dead to us for a long time before she died nearly three years ago. Now her house — which was already severely testing my sister-in-law’s theory — is abandoned, and we have inherited her mice, which skitter across our gold Formica countertops.

In our quest for bigger and better, new and different, we didn’t stop to weigh our lifelong values or long-term goals. We were caught up in the relentless need to consume, allowing ourselves to fall prey to the same cultural conditioning that has led Americans to choke down nearly $1 billion in credit card debt without thinking about what we really want: time with our kids to share experiences. We want to afford things that enrich their lives, like music lessons and camp, and prepare them to become grownups. This is just one price of our buy-now, pay-later mentality.

The more serious and persistent problem is the angst that's eating us up.What I’ve learned over the past decade is that the unasked questions are the most important, and the consequences of some decisions are too grave to be tossed over for the next shiny object, as alluring as that can be.

The one thing HGTV never shows is that sometimes change for change’s sake — and giving into one’s emotions — ends in buyers’ remorse. But according to some sources, the home shows aren’t 100 percent real — and the Trump presidency is.