No woman is safe: How the Hyde Amendment and H.R. 7 punish America’s most vulnerable

Women on Medicaid have been more affected by the crusade against abortion for 40 years, but now it's worse 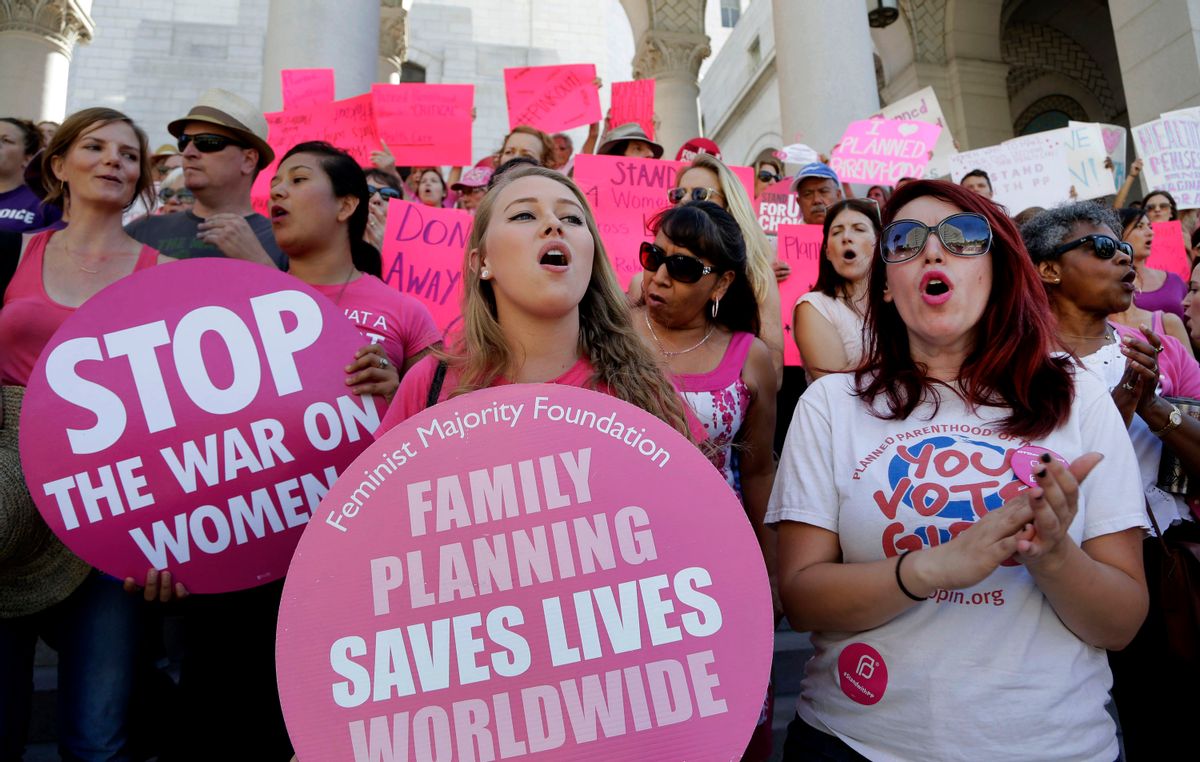 FILE - In this Sept. 9, 2015, file photo, Planned Parenthood supporters rally for women's access to reproductive health care on "National Pink Out Day'' at Los Angeles City Hall. Persistent Republican-led efforts to restrict access to abortion and to curb government funding for Planned Parenthood have been hotly debated in Washington and in states, and will be shaped in some way by the next president. (AP Photo/Nick Ut, File) (AP)
--

On Tuesday, the House passed H.R. 7, a bill that will make the Hyde Amendment permanent. For 40 years, the amendment, which has been subject to annual renewal since Rep. Henry Hyde (R-IL) first proposed it in 1976, prevents the federal funding of abortions through Medicaid. H.R. 7, formally known as the No Taxpayer Funding for Abortion and Abortion Insurance Full Disclosure Act of 2017, goes even further, extending the provisions of the Hyde Amendment by eliminating abortion coverage by all medical insurance plans participating in the ACA.

“While H.R. 7 does have sweeping impact on all women, it has a disproportionate impact on low-income women and women of color,” Ann Marie Benitez, senior director of government relations at the National Latina Institute for Reproductive Health, told NBC News. “As an organization that represents Latinas, we’re even more outraged about this, and we will continue to fight it.”

Currently 25 states already prohibit insurance providers from covering abortions. If the Senate passes the bill, the new law would mean that women who live in liberal states or have nonreligious employers will also no longer be able to get insurance coverage for an abortion. Cecile Richards, the president of Planned Parenthood Federation of America, tweeted on Tuesday that the vote by the House, two days after the largest women’s march in the history of the country, was an attack on abortion access and encouraged people to call their representatives.

To commemorate the 40th anniversary of Roe v. Wade in 2013, Bill Moyers talked to Jessica González-Rojas, executive director of the National Latina Institute for Reproductive Health, and Lynn Paltrow, founder and executive director of National Advocates for Pregnant Women. In this clip, they explain how the Hyde Amendment has punished poor women on Medicaid, leaving them with less reproductive rights than middle-class and wealthier women.

Watch the entire interview in our TV archive.

BILL MOYERS: I wanted to ask you — you talked about this — about economic issues involved in these decisions. How much of this is an issue of class? I ask because the late Congressman Henry Hyde from Illinois, who sponsored the Hyde Amendment way back in 1976, that prevents Medicaid from funding abortion care, he said this, quote: “I certainly would like to prevent, if I could legally, anybody having an abortion. A rich woman, a middle-class woman or a poor woman. Unfortunately, the only vehicle available is the Medicaid bill.” Which means that poor women have been affected by the crusade against abortion. How do you see this playing out in your work?

JESSICA GONZÁLEZ-ROJAS: I think of Rosa Jiménez, who was a 27-year-old college student. She had a 5-year-old daughter. She was getting a nursing degree. She really wanted to, you know, succeed in this country. And she faced an unintended pregnancy.

And because she was low-income, because she was a recipient of Medicaid, she was denied access to an abortion because of Henry Hyde. And she sought a back-alley abortion and died as a consequence. So this has real implications. She was the first known victim of the Hyde Amendment. And I’m sure these stories happen many times over. And women are just disproportionately impacted. Particularly, again, those at that margins and who are most vulnerable.

BILL MOYERS: You remind me of some statistics I saw the other day, from the Guttmacher Institute. It reports that among poor women, the rate of unintended pregnancy is five times higher than for higher-income women. And four in 10 women who have abortions are poor. What do you make of that from your own work?

JESSICA GONZÁLEZ-ROJAS: That, you know, because women don’t have access to some of the basic health care to prevent pregnancy, so the fact that contraception is often out of reach. For Latinas, for example, 97 percent of sexually experienced Latinas have used a form of contraception, but consistent use has been a problem.

So that’s when they fall under an unintended pregnancy situation. And they’re often scrambling to get abortion care. Often money — borrowing money from friends or trying other avenues. So where some of them are able and successful to get the abortions, there’s also so many unintended pregnancies that go term because of these policies.

LYNN PALTROW: Well, it’s also a strategy. Until recently, especially, the only Supreme Court successes in eliminating abortions for many years had been when they combined abortion with a vulnerable, less politically powered group. So the abortion in young women, or abortion in women of color and low-income women.

And they would get restrictions passed there. That clearly isn’t enough. And they’re expanding it and expanding it. Which is why, suddenly, we recognize the war on women, because it’s affecting white women too. But there has always been this war on women —

BILL MOYERS: You think there is a war on women?

LYNN PALTROW: I think there has always been, whether you look at how Native American women were treated from the beginning of this country’s origins, to sterilization abuse or Puerto Rican women and white women who were perceived to have — to be mentally disabled, we have always used reproduction and fought against women’s freedom and liberty, whether it was women in slavery, women winning the vote — every inch of our freedom, including our reproductive freedom, has been hard won and there has been a backlash.

And we’re in a very big backlash now. I think it’s so big that’s what’s happened is that women are beginning to recognize that what’s at stake is more than abortion. It is their personhood. Their ability to be full, equal, constitutional persons in the United States of America.