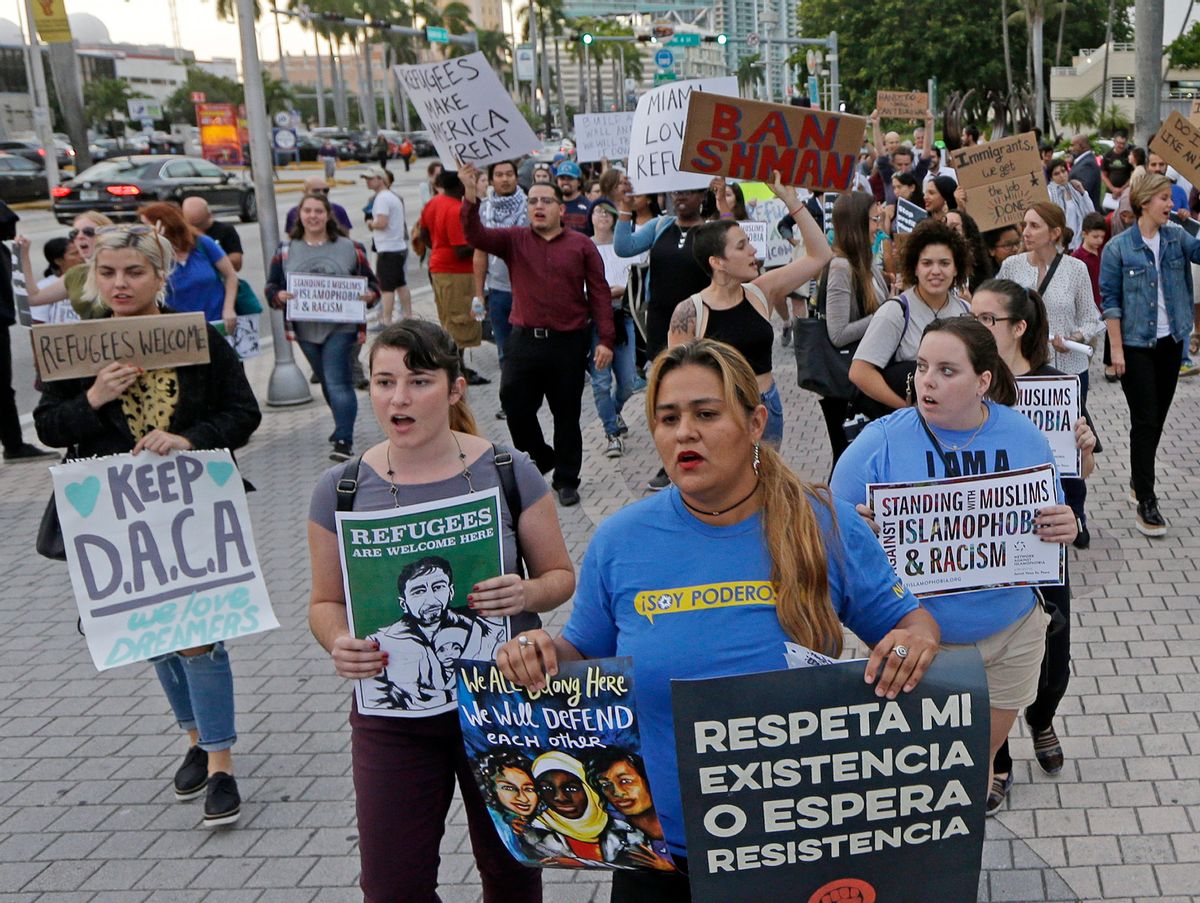 A look at what is happening:

A protest at John F. Kennedy Airport, where 12 refugees were detained Saturday, swelled to more than 2,000 people, including some celebrities. The agency that runs the airport tried to restore order by shutting down the train that runs to airport terminals. Gov. Andrew Cuomo, a Democrat, reversed that decision, saying people had a right to protest. "The people of New York will have their voices heard," he said in a statement.

More than 120 people clutching signs denouncing the Trump immigration orders gathered at Newark Liberty International Airport. NorthJersey.com reports that they joined lawyers who'd rushed to the airport to defend the rights of refugees and immigrants who were being detained and denied entry.

Dozens of people converged on Denver International to show their support for refugees. Standing in the main terminal Saturday, they sang "Refugees are welcome here." Some held signs declaring their identity, such as Jew or Christian, and the phrase "I come in peace." Denver has some direct international flights but it wasn't clear whether anyone has been detained under the president's executive order.

A protest by several dozen people in and around Portland International Airport briefly disrupted light rail service at the airport. The Oregonian/OregonLive reports that the demonstrators carried signs and chanted "Say it loud, say it clear, refugees are welcome here" and "No ban no wall America is for us all."

Hundreds of protesters blocked the street outside at San Francisco International Airport's international terminal to express their opposition to the barring of some people from Muslim-majority nations.

As motorists honked their support, demonstrators outside San Diego International Airport chanted "No hate, no fear, everyone is welcome here."

This story was updated by Salon staff at 10 p.m. ET:

This evening in opposition to President Trump's executive immigration order banning immigrants from the seven identified Muslim-majority nations for 90 days, U.S. District Judge Ann Donnelly in New York granted an emergency stay for citizens of those countries. "There is imminent danger that, absent the stay of removal, there will be substantial and irreparable injury to refugees, visa-holders, and other individuals from nations subject to the January 27, 2017, Executive Order," the ruling said.  It stipulates that they can legally enter the United States, and only applies to those who have already arrived in the US, those who are in transit, and those who hold valid visas.

Judge Donnelly wrote further, "The petitioners have a strong likelihood of success in establishing that the removal of the petitioner and other similarly situated violates their due process and equal protection guaranteed by the United States Constitution."