This is your brain on knockoffs: The science of how we trick ourselves into not believing our eyes

Here's why we fall for forgeries, even when the item itself doesn't even pass the eyeball test 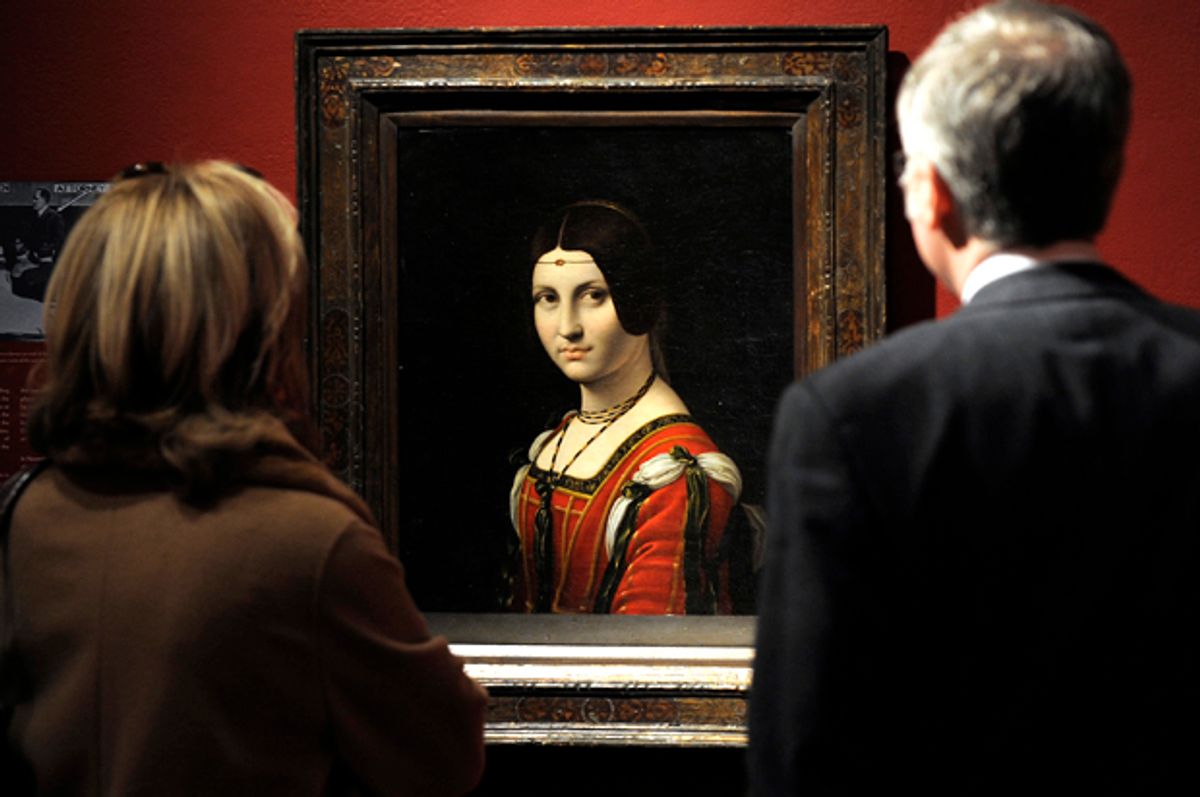 A painting called "La Belle Ferronniere" by a follower of Leonardo da Vinci (Getty/Timothy A. Clary)
--

The Chinese government just arrested a group of people associated with a sham tourist attraction that had lured hundreds of sight-seers to a fake Terracotta Warriors exhibit, comprised entirely of modern replicas. Sotheby’s recently hired Jamie Martin of Orion Analytical, a forensic specialist at testing art, who then discovered that a Parmigianino painting recently sold is actually a modern forgery (Sotheby’s returned the buyer’s money and then sued the person for whom they sold it). And the Ringling Museum in Sarasota, Florida, is hoping that a painting of Philip IV of Spain in their collection will be definitively determined to be by Velazquez, and not a copy in the style of Velazquez. And that’s just in the last week or so. Art forgery and authenticity seems to be in the news just about every week (to my publicist’s delight).

But I’m on a bit of a brainstorm. After my interview with Nobel Prize winner Dr. Eric Kandel on the neuroscience behind how we humans understand art, I’ve developed a keen interest in art and the mind. I tackled selfies, self-portraits and facial recognition recently, as well as what happens when the brain fails to function properly and neglects to recognize the value of art. Since my last book was a history of forgery, it was perhaps inevitable that I would wonder about the neurology of the recognition of originals versus copies. But while I looked into forgery from a wide variety of angles for the book, neuroscience was not one of them.

In the famous 1929 court case of the “American Leonardo,” art experts Sir Joseph Duveen and Bernard Berenson both rejected a version of Leonardo da Vinci’s "La Belle Ferronnière," after having seen only a photograph of it. They were sued by its owner, because their connoisseur’s opinion was so important that their dismissal ruined the value of the painting.

How did they know? For one thing, the original was hanging in the Louvre Museum. But couldn’t this have been a copy of the work, also by Leonardo? He made two versions of his "Madonna of the Yarnwinder," so perhaps he had made two versions of this portrait, too? Explaining himself at the trial, Bernard Berenson claimed a sort of “sixth sense” for authenticity, backed up by the New York Times, which stated that an expert like Berenson “has a special gift.” He had seen so many original Leonardos that he developed an intuition for authenticity. He got a “vibe” when he saw original works, and this painting — even a photographic reproduction of it — gave him no such vibe.

In that case, Berenson’s gut reaction was right. The “American Leonardo” was sold in 2010 as by a “follower of Leonardo da Vinci, probably before 1750,” not by the master himself. But in other cases, the gut reaction may prove right, but your brain can toy with you, and convince you otherwise. Readers of Malcolm Gladwell’s "Blink: The Power of Thinking Without Thinking" will know the phenomenon: He opens the book with the story of experts initially thinking that the Getty Kouros (a theoretically archaic Greek life-sized statue of an athletic male nude) was “wrong,” identifying it as a fake “in the blink of an eye.” But these renowned specialists convinced themselves that it was authentic, after much debate and careful consideration, and the museum bought it. It turned out not to be. Gladwell kicks off his book with this story because it demonstrates his main point: that our initial instinct tends to be correct, but overthinking things can get in the way. That “there can be as much value in the blink of an eye, as in months of rational analysis.” We run into “analysis paralysis” when we have too much information and we complicate the thinking process. A “thin-slicing” decision, made quickly and based on a reduced amount of data, is often the most accurate, he argues.

So what’s going on in our brains when we see an authentic work versus a copy? Experts, it seems, tend to be right when they follow their initial “vibe,” an instinctual judgment call uncluttered by additional material. From my research into how forgers successfully hoodwinked experts, I know that it is usually the additional material (origin or discovery stories that push the right buttons, doctored or invented provenance) that passes off a forgery, when the object itself, if examined in a vacuum, shouldn’t fool anyone. In Gladwellian terms, this means that the smartest forgers plant clues that provoke “analysis paralysis” and encourage experts to overlook their “thin-slice” response: we might call it encouraging “thick-slicing.”

In master forger case studies, experts seem inevitably to fall for traps laid by forgers. I called on an expert to help explain further: Jehane Ragai of the American University in Cairo, who has a recent book, "The Scientist and the Forger." She spoke of how recognition of an artist’s hand provokes a similar reward response to a wine specialist recognizing a vintage, or an audience member recognizing a line while seeing a Shakespeare play, or completing a crossword. It triggers a feeling of reward, as if solving a puzzle, a feeling of intelligence, the same sort that comes when exercising any faculty that one trains at and feels accomplished in. It’s a flexing of muscle through which we show ourselves that our hard work has paid off.

This pleasure principle may be why experts seek a manifestation of their expertise, to say “yes, this is by Velazquez.” It is far less satisfying to say, “It’s not by Velazquez, I don’t know who it’s by.” While there might be reward in catching something as a copy or a forgery by spotting the anachronism, this is associated with negativity, and it is rarely as targeted as “Yes, this is by Velazquez.” It is usually a double negative, “No it’s not by Velazquez, I’m afraid, and I don’t know who it’s by.” Thus the brain seems wired for experts to find clues that feed its reward in recognition, essentially feeding its ego (what Gladwell describes as “psychological priming” and “implicit association”), which plays into the hands of the forger.

Likewise, if a forger is good enough at channeling the artist, and if he (and it’s inevitably a he) puts his own passion and creativity into the work (albeit in the style of another, more famous artist), then this goes a long way toward making us think the work is authentic. Ragai continues, “I might surmise that the brain would respond in a way which probably would not differ from the response observed in the case of a genuine artwork.” The forgery must provide the same “aesthetic experience” of the genuine work. Rote, uninspired copies give the brain an “I’m a copy” vibe. Original works, even in the style of another, might not. Try signing your name, then ask a friend to try to precisely copy the signature, and you’ll see the difference. That’s why the most successful forgers never copy existing works, but instead create what look like known, but lost, works. In other words, direct copies, line for line, feel lifeless, but something newly created, with artistic verve and passion, is imbued with a liveliness that parallels wholly original works.

Does the brain play tricks more on experts than your average Joe?

In 2011, Martin Kemp, an Oxford art history professor, ran an experiment referenced in Ragai’s book, in which 14 non-specialists were shown genuine and fake “Rembrandt” paintings while undergoing brain scans. A painting was shown to them and they were told it was by Rembrandt. Another painting was shown to them and they were told it was a fake. By measuring the pleasure centers of the brain, Kemp concluded that “the way we view art is not rational.” Being told a work was authentic (whether or not it actually was) activated pleasure centers when it was shown, which was not the case when the viewer was told it was inauthentic (even if it was actually the real deal). It’s all about anticipation. If you’re poured a glass of wine and told it’s a 1955 Chateau Lafite Rothschild, you’ll enjoy it much more than if you’re told it’s a 2015 Trader Joe’s wine-in-a-box, whichever it truly happens to be. (For more on this, see my eBook single on wine forgery).

But while non-experts are led by being told what is authentic and what is not, clever forgers do a more elaborate version of the same thing to snare specialists. Rather than telling them “this is authentic,” which would summon a defensive reaction on the part of the expert (“Oh yeah, I’m the expert here, I’ll tell you what’s authentic and what isn’t”), they lay a trail of traps by scattering subtle clues that lead the expert into following a carefully plotted trail, but to come to their own conclusion about the authenticity of the work in question. That’s a Machiavellian approach — get someone to say what you want them to say, by making them think it was their idea to begin with.

Sotheby’s hiring Jamie Martin to run forensic tests is a great step for the art trade. Now, if only we could convince art collectors to refuse to buy art over a certain minimum value, which is not accompanied by recent forensic test results, then we’d really be getting somewhere. But the art trade is a complex, strange, opaque organism weighed down with tradition and inertia. Experts, when their opinion is the only defense against inauthentic works, are too often fooled by forgers, and their own minds, to be relied on exclusively. If in doubt, test it. If not in doubt, test it anyway. It’s no guarantee, but it’s a far safer bet than relying only on our fallible brains.