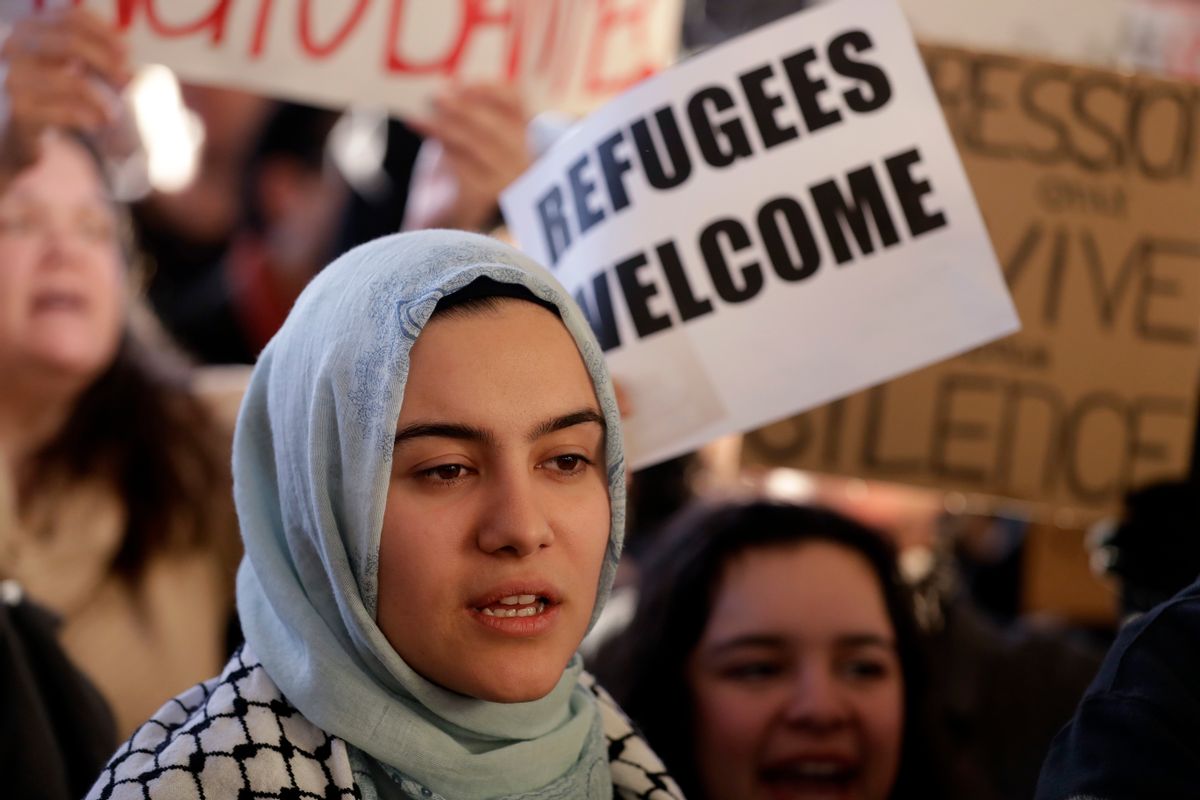 At every stage of the rollout and enactment of the Trump administration’s ban on admitting refugees and immigrants from select Muslim nations, the president and his aides have been lying. Their attempts to justify the abrupt and haphazard implementation of the order, which caused chaos at airports and left travelers and legal residents detained without lawyers, have hinged on a vague insistence that it was a matter of national security.

Quick action was necessary, the argument goes, to prevent terrorists from those countries from pouring into the country. This is false, and the broader implications of this enthusiastically promulgated lie can’t be ignored.

Sean Spicer, the White House press secretary, went on ABC News over the weekend and said, “What we couldn't do was telegraph our position ahead of time to ensure that people flooded in before that happened, before it went into place.” He added, “We had to do it in a way that ensured the safety of America was preserved.” Reince Priebus, the White House chief of staff, said on NBC's "Meet the Press" that there could be no “grace period” for implementation of the order “because then people that want to do bad things to Americans just move up their travel date two days in order to get into the country before the grace period's over.”

And on Monday morning, President Trump himself tweeted that any delay in implementing the order would just result in “bad 'dudes'” hurrying to get into the country:

All of this is ridiculous and false. Basic logic undermines the premise of the argument: If suspected terrorists were able to “flood” into the country before this order went into place, wouldn’t they have done so already?

If members of the administration are talking about terrorists trying to sneak in as refugees from Syria, then they’re cynically and brazenly lying. No one can sneak in as a Syrian refugee in two days. Nor could anyone do it in a week or two weeks or two months or six months. The screening and admissions process for refugees from Syria involves several rounds of interviews and background checks by the United Nations and various nongovernmental organizations, and that’s just to be selected as a potential candidate for resettlement in the United States. After that, candidates must go through still more interviews, biometric screening and investigations by U.S. authorities. The whole process can take as long as two years.

When it comes to people traveling on visas, it’s not as if someone can just show up at a U.S. embassy and obtain travel documents on the quick. You have to request interviews, produce documents and pay fees. That process can take weeks or months. This goes back to the basic logic that undermines the administration’s argument: There are already checks and safeguards in place to make sure people aren’t able to “rush into our country.”

A draft "dissent memo" signed by numerous foreign service officers and U.S. diplomats, which will reportedly be submitted to the State Department before the end of the day Monday, makes this clear: "We do not need to place a blanket ban that keeps 220 million people — men, women, and children — from entering the United States to protect our homeland. We do not need to alienate entire societies to stay safe. And we do not need to sacrifice our reputation as a nation which is open and welcoming to protect our families."

Spicer defended the administration’s actions on MSNBC's "Morning Joe" on Monday and brushed off the confusion in the airports by arguing that “there was a very short period of time in which we had something to execute to ensure that the people of the United States were safe.” Added Spicer: “What happened if we didn’t act and someone was killed?” When pressed on whether he was saying that an imminent threat forced the administration’s hand, Spicer backed off. “The answer is, we act now to protect the future,” he said.

Basically, the White House has been acting as if a national security crisis were unfolding — quickly and without adequate vetting because “security” demanded it. When pressed on what the “security” need was, the best excuse administration officials could come up with is that someone at some point in the future might die. They filled in the gaps with ridiculous excuses about potential terrorists elbowing their way into the country, absent immediate action. All along they insisted that the confusion, panic and illegality that stemmed from that executive order was worth it because the ends justify the means.

“In terms of the upside being greater protection of our borders, of our people, it’s a small price to pay,” said White House adviser Kellyanne Conway about the people detained.

This raises a troubling question: What happens when there really is a national security emergency? Right now the administration is facing massive public blowback and bipartisan resistance from Congress because what it’s doing is rightly seen as unnecessary, legally dubious and (from the Republican point of view) politically counterproductive. The political calculus will change when there’s an actual threat, be it a large-scale terrorist incident or some other mass-casualty event. Republicans will be far more open to the “security at all costs” posture of the administration and (if past is prologue) a good chunk of Democrats will buckle under pressure as well.

That’s what has me really worried about the administration’s behavior. Right now Trump and his aides are having trouble justifying the slipshod and draconian action they took on immigration. But at some point in the future something truly scary might actually happen, at which point this same administration will be much freer to move quickly to curtail rights and pursue crackdowns in the interest of “national security."