Malcolm McDowell on the appeal of villainy: "We’re all looking at Trump now. He’s fun. No wonder they write about him all the time."

"The whole point with careers," reflects Mcdowell, "is you are not going to make that many great movies" 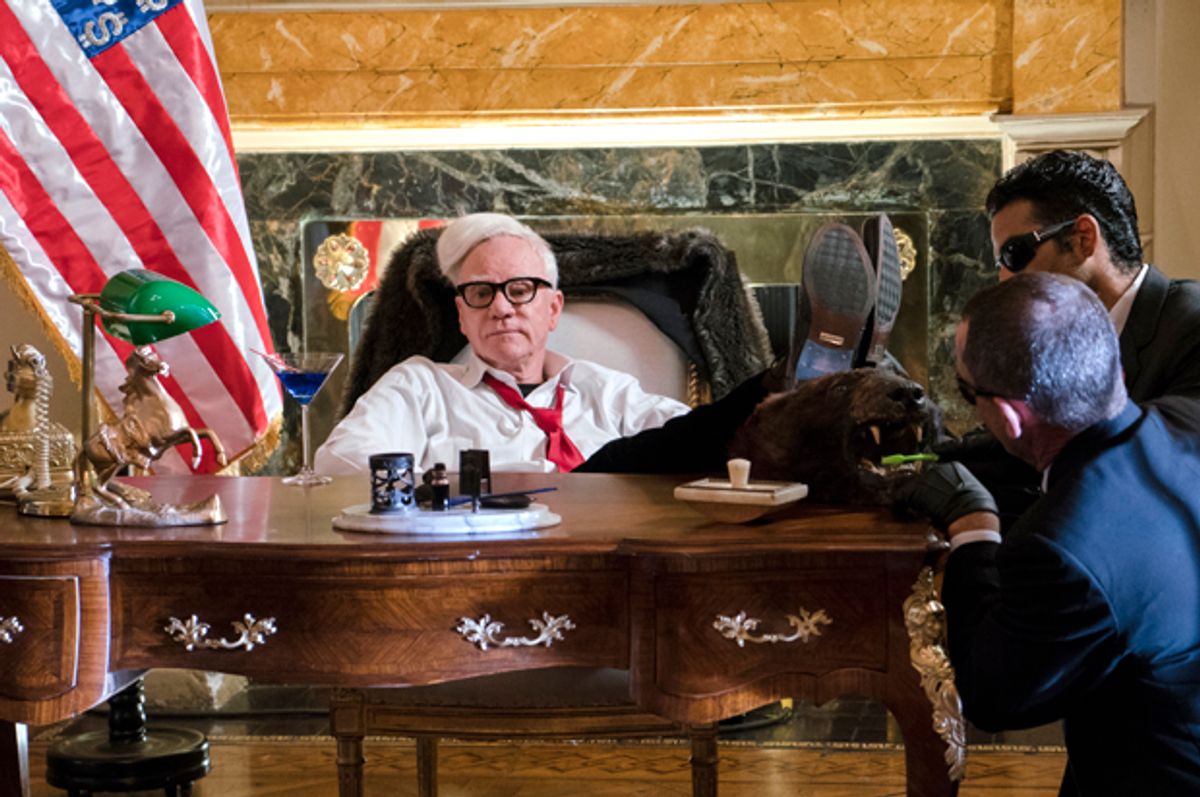 When Malcolm McDowell burst on the film scene, guns blazing, in director Lindsay Anderson’s classic 1968 film, “If. . .” he was an exciting, and cheeky, new talent. McDowell was also indelible as the ultraviolent Alex in Stanley Kubrick’s masterpiece “A Clockwork Orange.”

His subsequent films, which included his reprising his “If. . .” character Mick Travis in “O Lucky Man” and “Britannia Hospital” as well as playing in the title role in the notorious pornographic debacle “Caligula,” cemented the actor’s penchant for playing larger-than-life characters.

Whatever the role, McDowell has always been magnetic on screen. His suave villainy bolstered films like “Cat People” and “Blue Thunder.” But lately he has been playing comic parts on TV series. Contemporary audiences may know McDowell best from his roles as Thomas, the conductor on “Mozart in the Jungle,” or as Stanton Infeld from “Franklin and Bash.”

In the souped-up “Death Race 2050,” now out on video, McDowell plays a comic villain who chairs the United Corporations of America. A nattily dressed megalomaniac, the Chairman organizes the popular blood sport of death racing for fun and profit. He may have contempt for people, but he thrives on their competition.

The film, produced by the legendary Roger Corman, let McDowell have tremendous fun playing an extremely flamboyant role, and the actor relished his plum part.

He spoke with Salon about making the film, his penchant for classic cars and the secrets to his career longevity.

You often play characters that have power and wield it maniacally, from “Caligula” to the Chairman. Can you talk about playing megalomaniacs?

I literally try to have bit of fun and not take it too seriously, but these characters are fun, and they are fun to watch. We’re all looking at Trump now. He’s fun. No wonder they write about him all the time. There’s something about these characters that have great energy and a twinkle in their eye. I enjoy doing them.

The film glorifies violence, and violence has been instrumental in some of your most famous films, such as “If. . .” and “A Clockwork Orange.” What can you say about the way films you make portray violence, even in a satiric, over-the-top fashion as “Death Race 2050” does.

You’re talking about 90 percent of the stuff that’s done. Cartoons, the news — it’s all pretty violent, and it’s true one becomes slightly immune to it all. But seeing it on a screen is not the same as seeing it in real life, as we know. I have done my fair share of violent films, but that seems to be what I’m offered most. “Death Race 2050” is really like a comic strip.

I’ve done two nonviolent shows on TV. On “Franklin and Bash” I played the man who knows everything, and now I’m a conductor on “Mozart in the Jungle.” They weren’t violent, and they were terrific comedic characters. On “Entourage” I played more of a heavy. But someone had to boss Jeremy Piven around!

The Chairman has a very flamboyant look, peacocking with a wild hairstyle and fancy clothes. Can you talk about his look?

They came up with that look. I walked in and said, “Let’s see what it looks like!” It’s fairly strange to me, but it was fun. It came to enforce the caricature thing we were doing. It was perfect for the Chairman.

The Chairman gets to watch the race from the sidelines. What can you say about your driving skills?

I would have to say I’m a fairly aggressive driver coming from Europe. Driving in London, you have to be a wannabe Grand Prix driver. I’m fairly fast. Hopefully, I’m safe. I haven’t had an accident in 50 years. Sometimes [my driving] doesn’t go with Southern California traffic. They take their time here.

I’ve got some nice cars. I’m a car buff. I have a couple of classic cars that I love, which I couldn’t have as a teen: a couple of Jaguars, a Morgan, an Austin-Healey. I have a new Silverado high country truck. It has all the bits and pieces, and it has beautiful hand-stitched leather seats. I have a Tesla. If I have to go to L.A., I take that, and that’s pretty cool.

My cousin is on the board of the Antique Automobile Club of America Museum in Hershey, Pennsylvania. They have some great classic cars!

Have you driven any?

When you play evil characters, I always find you inject them with a seductive quality. There’s an allure to your characters even when there is a sense of danger. Can you discuss that? Is it deliberate?

I don’t set about to do that. All I really try to do is have a damn good time. If I imbue characters with fun — even if I’m playing a monster — it’s infectious. There is a light behind the eyes. That’s all I do. I try to enjoy it as much as I possibly can — even if it’s something very dark. I don’t go out to do something like what you’ve described. But if it comes across that way, that‘s great.

You are perhaps most identified with “If. . .,” “A Clockwork Orange” and “Caligula.” What can you recall about those projects and how has making films changed since those heady days?

The business has changed, of course — greatly. I have changed, greatly since I was a kid. You adapt to more age-appropriate parts, and you move on to explore different, more mature kind of characters. I love it. I don’t mind playing my age. I’m not trying to hang on to my youth. I am in my 70s and there are some damn good parts — and luckily, I’m still being offered a few.

Most of the great work these days I’ve found is for TV. That’s how completely different things are. We’d never make “If…” or “A Clockwork Orange” now. Really, there is no place anymore for independent movies, and if they do get made, it’s 10 years in the making.

Your “Death Race 2050” character bemoans going from “blue chip to junk bond.” What observations do you have about making films that range from highbrow to lowbrow?

The whole point with careers is — and I learned this at a young age — you are not going to make that many great movies in your life. A handful of them is extremely fortunate. It’s so difficult to make a great movie; it’s a rare and beautiful thing. I’m a working actor, nothing more than that. I choose from what’s sent to me. My agent hands me scripts. I read them and say, “I’ll go do this one.” Invariably it’s the one that['s] not paying any money. I do keep playing billionaires. I don’t know why. I don’t have any money.

“Death Race 2050” is all about the survival of the fittest. What can you say about your career longevity? Why have you survived and thrived?

A lot of it is luck. There have been some lean periods in the 50-odd years I’ve been acting. I’ve been very, very lucky. It’s always difficult when you make a subtle move from your 20s to your 40s. You’re not the new kid. That’s rough. I did some theater for a time and enjoyed that. I’ve always felt that I could go back to the theater. But now I have younger children, and I don’t want to be away from them. I’m protective about working closer to home.