President Trump takes on federal workforce, but will have to handle resistance first

Trump can make a mark with a hiring freeze, but he'll have to acknowledge that many are reticent to support him 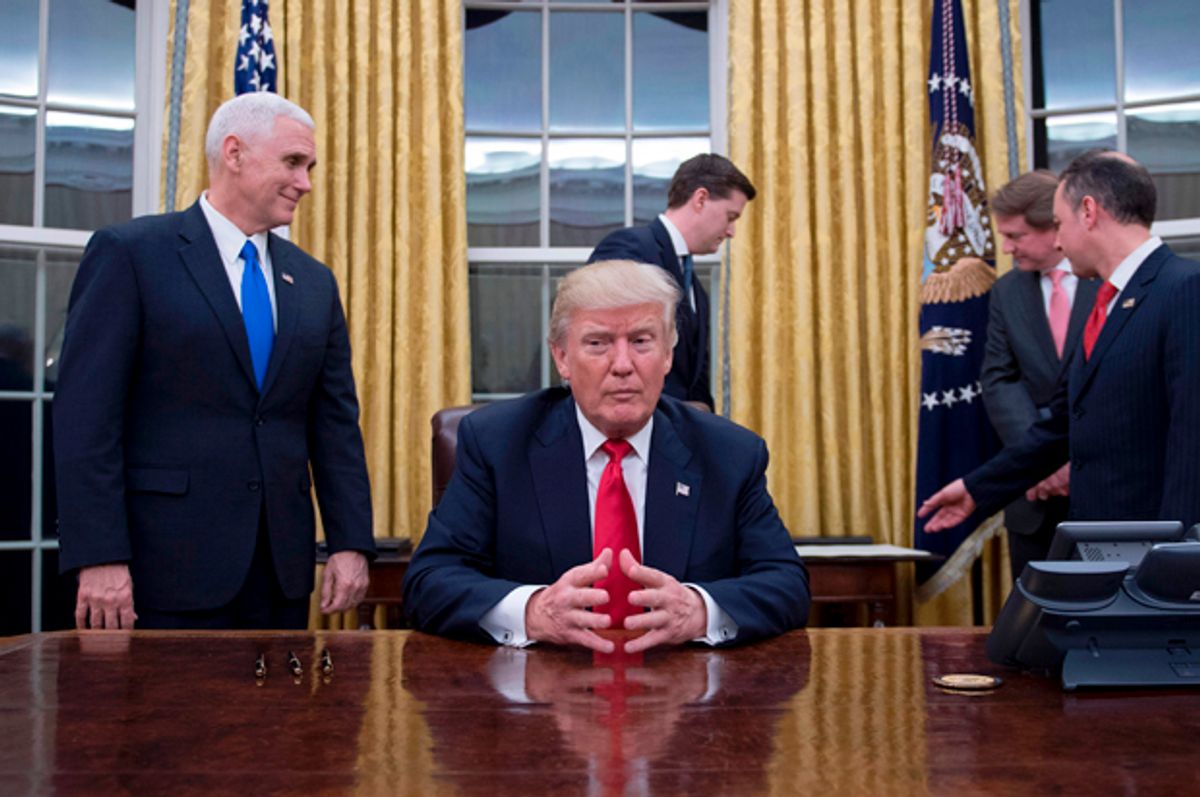 On Jan. 20, President Trump became the head of a sprawling federal bureaucracy. His first major actions as manager were to freeze federal hiring, curb the public statements of federal scientists and reportedly ask the senior management team at the State Department to leave.

These actions are unsettling to a troubled federal workforce whose work will ultimately determine the success of his presidency.

The United States government has a US $4 trillion budget and employs 2.8 million civilian employees and 1.4 million uniformed military personnel. Indeed, Trump has taken on a management challenge orders of magnitude larger than anything he has ever experienced.

To put it in perspective, the largest company in the world, Wal-Mart, has annual revenue of US $482 billion, about 1/12 the size of the federal government.

The president is not taking over one but more than 200 organizations, each with unique opportunities and complex challenges. The enormous budget and millions of federal workers are divided into 200 to 300 distinct agencies, depending upon how you count. Each agency has its own structure, statutory authority and legal obligations. They also have their own cultures and histories.

There is a lot riding on the president’s management choices.

First, if federal agencies fail, it reflects back as a failure of the president. The poor response by FEMA officials during Katrina will always be a legacy of the Bush presidency, just as the veterans health care scandal is part of Obama’s legacy.

Second, federal workers regulate markets, provide national defense, land planes, deliver mail, protect civil rights and maintain highways and national parks. If the president is inattentive to the complexity of this challenge, or fails to understand major federal workforce issues, the consequences could be dramatic.

Any new executive assuming control will want to identify parts of their organization that are performing at a high level and, perhaps more importantly, parts that are not. The president’s ultimate success will depend upon the performance of the federal workforce that implements national policy. If government workers fail, the president fails.

During Obama’s second term, my colleague Mark Richardson and I surveyed 3,500 federal managers to find out where those pitfalls might be. We asked long-time managers whether federal agencies were up to the job of fulfilling the core missions given them by Congress and the president. The study revealed that the federal personnel system is under significant stress.

A significant percentage of managers reported difficulty recruiting and retaining the best employees. They worry that merit is not sufficiently considered in decisions about promotion or dismissals. Factors like political connections or fear of red tape and lawsuits have too much influence over personnel actions, they said. Ultimately, federal managers worry about whether federal agencies have the human capital necessary to fulfill their core missions.

One unique feature of the survey was that we asked federal managers to also share their opinions of other agencies, primarily those with which they work day-to-day.

How skilled were the workforces of other agencies? We aggregated their responses into the chart at the end of this piece to get a nice picture of the management challenges facing the new president.

The workforces of agencies such as the Federal Reserve and the National Institutes of Health are perceived as quite skilled. Those of the Bureau of Indian Affairs and Transportation Security Administration less so. Of course, the skills required for some jobs are different from others, but this is what the president confronts on his first weeks in office. One of the primary jobs of a manager is securing the human capital necessary to accomplish the mission of the organization.

Federal employees are used to working through changes in administrations between Republicans and Democrats, and pride themselves on their ability to work for either professionally. However, dramatic – and in the view of some, ill-advised – changes in policy can generate resistance or departures. Any president who wants to dramatically alter the mission of an agency will encounter all-too-human resistance from federal workers who do not share the president’s views.

This resistance can take the form of ignoring or delaying administration proposals. Career officials may write extensive memos about how the new policy contravenes important law or policy and suggest further study. Agencies complain discreetly to sympathetic members of Congress or the press. During his campaign, Trump was endorsed by two unions in the Department of Homeland Security, but these were an exception among government unions. Most recently, several federal unions have spoken out against Trump’s hiring freeze.

At some point, the change in administration may be significant enough that many long-serving career professionals will leave altogether.

In a recent paper written with Alex Bolton from Emory University and John de Figueiredo from Duke University, my colleagues and I analyzed data on the careers of federal employees from 1988 to 2011. The data revealed that departures among federal workers increase after a party change in the White House, particularly at the higher levels and in agencies whose views about policy differ substantially from the new president. Historically, for example, there are higher rates of departure in an agency like the Environmental Protection Agency under Republican presidents than Democratic presidents.

People go to work for agencies at least partly because they support the mission of the agency. This means Democrats are more likely to want to work in agencies related to social welfare or regulatory agencies, and Republicans in others such as law enforcement and defense.

For Trump, turnover is likely to be greatest in agencies like the Department of Energy and State Department, where his actions suggest he has positions at odds with the historic activities and positions of those agencies. The departure of employees with the most expertise and experience can be a real challenge, particularly in areas like emergency response or veteran health.

For Trump, a hiring freeze is one way to make a mark. But to successfully manage the government, he will have to acknowledge the reticence of many to respond to his leadership.

David E. Lewis, William R Kenan, Jr Professor and Chair of the Department of Political Science; Co-director of the Center for the Study of Democratic Institutions., Vanderbilt University