It's exciting, impressive even that "Queer Eye" feels so retrograde. The question is, Why doesn't Netflix think so? 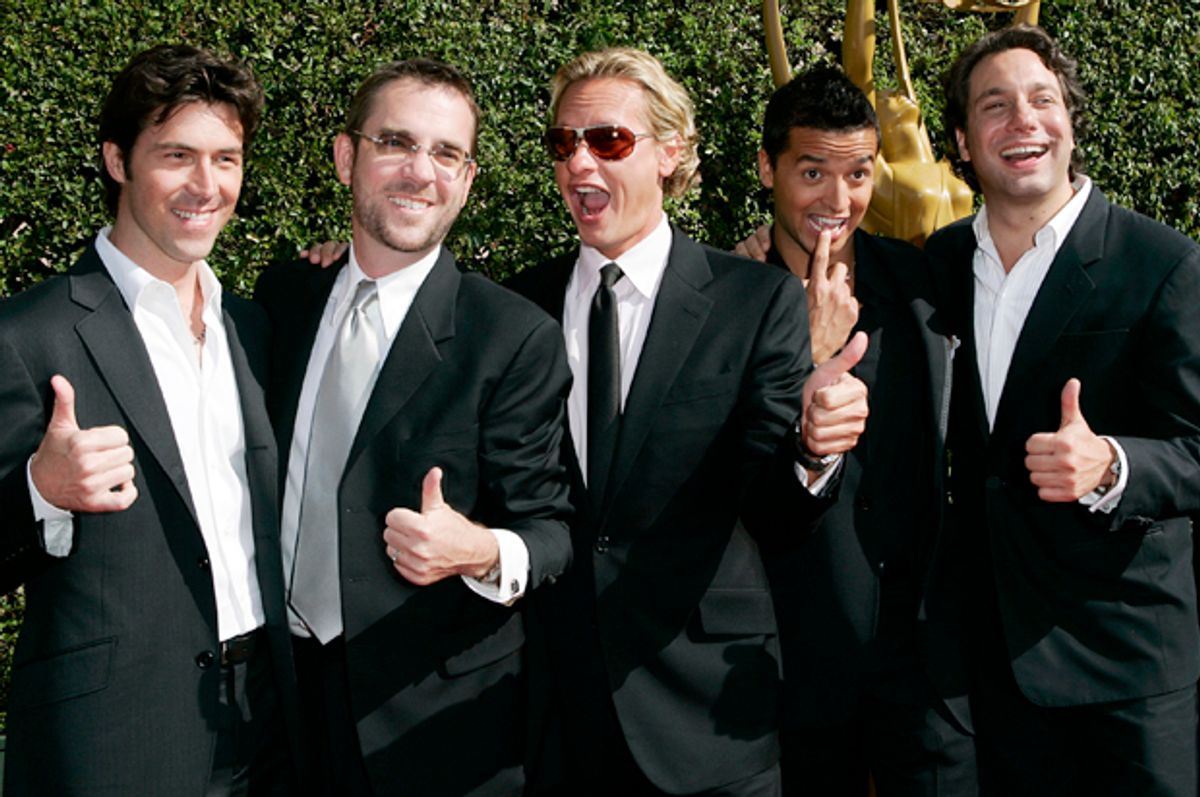 Netflix wants to make America gay again. The streaming service announced this week that it will be rebooting “Queer Eye for the Straight Guy,” the short-lived reality program that aired on Bravo from 2003 to 2007. The onetime cultural phenomenon features five gay men (known as the “Fab Five”) giving a hapless straight slob a makeover. In a fairly tone-deaf press release, Netflix argued that the show’s revival is just what the doctor ordered to heal an uncertain America divided by the Trump administration’s aggressive anti-LGBT bigotry.

“A team of five brave men will try to bring us closer together with laughter, heart, and just the right amount of moisturizer,” Netflix said. “With a new Fab Five and the show’s toughest missions to date, ‘Queer Eye’ moves from the Big Apple to turn the Red States pink — one makeover at a time.”

Netflix, which has recently rebooted “Full House” and “Gilmore Girls” to presumptively massive ratings (the service doesn’t report viewership), has perhaps overestimated how much the LGBT community would embrace a revival of the controversial reality program. The show, whose title was shortened to “Queer Eye” in its third season, was often accused of trafficking in gay stereotypes, perpetuating the idea that queer men are swishy fashionistas who are ready to knock down your kitchen wall and turn it into a breakfast nook. Even Thom Filicia, the show’s interior design guru, once claimed that the show would seem fairly “passé” by today’s standards.

That’s somewhat of an understatement. What’s puzzling about Netflix’s decision to bring back the show — which will feature a new cast — is why the company felt that this was the story that needed to be told about LGBT people in 2017, a year in which the queer community faces the greatest threats to its rights and dignity in decades. The show is better than many give it credit for, but “Queer Eye” is nonetheless irrelevant in speaking to the needs of today’s viewers.

It’s difficult to remember in the era of “Orange Is the New Black” and “Glee” (when you can’t throw a rock without hitting a queer person on TV), what a massive and singular cultural phenomenon the show was in 2003. “Queer Eye for the Straight Guy,” which won the Emmy for Outstanding Reality Program in 2004, was second to only “The Osbournes” in cable ratings. The show was spoofed by “South Park” and popular enough to spawn a remarkably offensive Comedy Central parody, “Straight Plan for the Gay Man.”

President George W. Bush even name-checked the show during the 2004 Radio and Television Correspondents Dinner, quipping that the reality stars should come give his Cabinet a makeover. “Do you know what Rummy’s favorite TV show is?” he asked attendees. “‘Queer Eye for the Straight Guy.’”

That mainstream cachet earned the show a great deal of criticism from the LGBT community for what many argued was a minstrel portrayal of gay life.

“The joke's on the gay men — and it's a fairly cruel joke the audience participates in,” wrote the Socialist Worker’s Nicole Colson in 2003, adding, “The producers selected five living stereotypes to stick in front of the cameras, replete with stylish clothes, good hair, money to burn, and plenty of catty wit and sexual innuendo. The show [reinforces] the prevalent idea that all gay people are upper middle class white men with money to burn — despite the fact that most gays and lesbians are working class.”

All these criticisms are absolutely true. One of the most distasteful aspects about the show is that it defines  acceptance of queer people as being contingent on their serving the needs of heterosexuals, instead of arguing that LGBT folks deserve respect on their own terms. In “Queer Eye,” gay people are defined by consumption — their knowledge of designer brands like Marc Jacobs and Diesel. On the face of it, the show reinforces the notion that queer men are your florists, interior designers and personal shoppers, not your friends, neighbors and people whose humanity is defined by who they are, not what they can do for you.

But “Queer Eye” is perhaps gentler and more nuanced than its critics suggest. The show, which debuted a year before Massachusetts became the first state to grant same sex couples the right to marriage, found the humanity underneath its stereotypes. If gay men were often portrayed as bitter and cutting — ready with a savage putdown — the Bravo show killed tired clichés with kindness.

“Their Gaylord air is cut with affection and generosity; their ebullience is sprightly rather than hysterical,” the Village Voice's Richard Goldstein wrote in a defense of the show after its divisive debut.

You know the setup of “Queer Eye” by now: The Fab Five arrive at the home of a slovenly heterosexual and root through his belongings, gasping in horror at the man’s hole-in-the-crotch boxers and cargo shorts. But while shows like “What Not to Wear” operate with an undercurrent of disdain, there’s a real affection here between the cadre of lifestyle experts and their subjects. For instance, the “makeovers” are referred to as “make betters,” befitting the “Queer Eye” ethos of self-improvement.

In the show’s premiere, the team assists Brian Schepel, an artist who sports overalls and a Unabomber ponytail. Carson Kressley, the group’s fashion adviser, helps him pick out a wardrobe that better expresses his personality, rather than forcing him to dress like a West Hollywood go-go boy. Brian opts for Lucky Brand jeans and a plaid shirt, more of an upgrade than a total fashion rehab.

The mixed reaction to “Queer Eye” was as much about the discomfort (even among members of the LGBT community), with seeing effeminate men portrayed on television as it was the show’s actual limitations. Kressley instantly became the program’s breakout star as well as its easiest target — a Paul Lynde type with a Visa black card in hand. He’s sassy, loud and sex obsessed, coyly peeking into the dressing rooms of its straight charity cases while they undress. But the reason for his sustained celebrity (he’s currently a host on “RuPaul’s Drag Race”) since the show ended isn’t because his flamboyance is comforting to straight audiences. It’s that he’s really funny.

As Kressley has insisted, his flamboyance is a natural expression of who he is as a person. He isn’t playing it up for camp. “We’re not cartoonish, and we’re not pretending to be super-gay or super-straight or whatever,” Kressley told The Advocate in 2003. “We’re just being ourselves. I’m not going to make any excuses for who I am, and I don’t think any of these guys are either.”

If “Queer Eye” traffics in light deconstruction by taking stereotypes and making them human, clever and likable, that was extremely necessary at a time when many Americans knew very few LGBT people. In 2003 GLAAD’s annual “Where We Are Now on TV” report found that there were just five queer leads in all of prime-time television — a number that doubled when NBC opted to air reruns of the reality program. That visibility gave the Bravo show an opportunity to dispel myths about who gay men are, even if it seemed to many viewers to reinforce them.

How well it did so is up for debate. When TV host Andy Cohen asked the Fab Five in 2003 whether they felt the show had been good or bad for the LGBT community, they responded in unison, “Both.”

What purpose would “Queer Eye” serve in 2017, though? When it comes to busting stereotypes, today’s TV landscape is already doing that work better than its forebears ever imagined by simply showing queer people going about their lives — in all their messy, fully realized beauty. Amazon’s family dramedy “Transparent” portrays two generations of LGBT people, a transgender woman and her queer daughters, living at the intersections of identity and class privilege. “Crazy Ex-Girlfriend,” the CW’s acclaimed musical-comedy, aired a song last season busting myths about male bisexuality, the Huey Lewis-influenced “Gettin’ Bi.”

If Netflix wants to help the LGBT community, why not give a platform to queer storytellers to further inclusive representation that speaks to where we are now? At the time of this writing, the popular streaming service only has one explicitly LGBT-themed show, the popular prison dramedy “Orange Is the New Black.”

In fact, television as a whole boasts few programs that centrally focus on LGBT characters. There’s MTV’s “Faking It,” a comedy about life at a progressive high school where the queer kids are popular and straight people are outcasts, and Freeform’s “The Fosters,” in which an interracial lesbian couple struggles to balance marriage with the responsibilities of taking care of children. Shows like “The New Normal” and “Looking” lasted just a handful of seasons between them, while cable television has yet to fill the vacancies left by Showtime’s “The L Word” and “Noah’s Arc,” the Logo show about gay black men living in Los Angeles.

It’s not just that Netflix can do more to further LGBT representation; in Trump’s America, it’s absolutely imperative to do so. Just today the 45th president announced that he intends to sign into law the First Amendment Defense Act, which would legalize discrimination against LGBT people in the name of “religious freedom.” His Cabinet, full of virulently anti-gay picks, is a threat to the safety and humanity of queer people at every level. When audiences can see that our stories matter, they are reminded that gay lives and our rights matter.

Despite its flaws, “Queer Eye” will always have its place in the canon as a groundbreaking show that opened the doors for more authentic representation on TV. But it’s far from the healing that Trumpland needs now.