McCain has broken with the president on his immigration order, torture, free trade and ties with Moscow 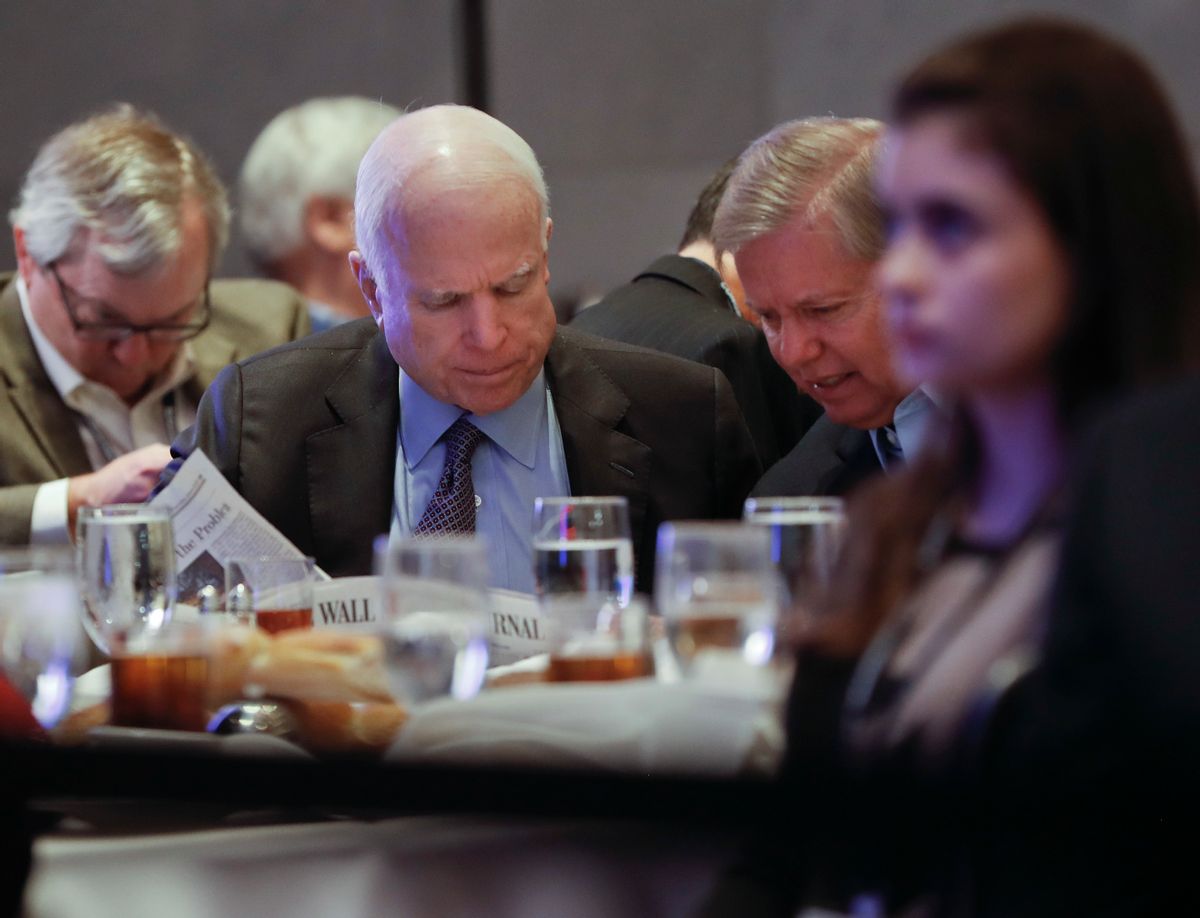 In this Jan. 26, 2017, photo, Sen. John McCain, R-Ariz., left, and Sen. Lindsey Graham, R-S.C., right, read the Wall Street Journal newspaper as they wait for President Donald Trump to speak at the House and Senate GOP lawmakers at the annual policy retreat in Philadelphia. McCain has emerged as Trump’s top Republican nemesis on Capitol Hill. Since Trump’s inauguration, McCain has broken with the president on his immigration order, warned him against any rapprochement with Moscow and lectured him on the illegality of torture. He supplied only a tepid endorsement of Rex Tillerson, Trump’s secretary of state nominee. (AP Photo/Pablo Martinez Monsivais) (AP)
--

Since Trump's inauguration, McCain has broken with the president on his immigration order, warned him against any rapprochement with Moscow, lectured him on the illegality of torture, and supplied only a tepid endorsement of Rex Tillerson, Trump's secretary of state nominee.

Oh, and McCain also hammered Trump for backing away from — instead of embracing — international free trade agreements.

As Trump presses ahead with an ambitious and contentious agenda at home and abroad, McCain is pushing back, using his seniority in Congress and his characteristic bluntness. McCain, 80, cruised to a sixth Senate term in November, defeating a Democratic challenger who hounded the senator for standing by Trump even after the billionaire businessman insulted him as a "loser."

McCain dropped his support for Trump in early October after a 2005 recording surfaced in which Trump boasted about groping women. The move led to an outcry from conservative voters firmly behind Trump. But McCain overcame the backlash in what may have been his final election.

He hasn't looked back.

"This executive order sends a signal, intended or not, that America does not want Muslims coming into our country. That is why we fear this executive order may do more to help terrorist recruitment than improve our security," McCain and Graham wrote.

That elicited an angry tweet from Trump, who accused the two of "looking to start World War III."

McCain said Monday that Trump's order bans Iraqi pilots from coming to the United States for training so they can join the fight against the Islamic State.

As chairman of the Senate Armed Services Committee, McCain is one of the leading Republican voices in Congress on national security matters. Re-elected last year to another six years in office, he is free to challenge the president without fear of retribution from voters.

And perhaps on no issue has McCain been more unequivocal than of Trump's desire for a better relationship with Moscow.

Trump's praise for Russian President Vladimir Putin before and after the election signaled that U.S.-Russia relations could be getting a makeover — even after U.S. intelligence agencies determined Moscow meddled in the campaign to help Trump win.

Ahead of a telephone call on Saturday between the two leaders, McCain issued a blistering statement in which he called Putin a "murderer and a thug" who will never be an ally of the United States. He cautioned Trump against lifting U.S. sanctions against Russia and voiced his support for legislation that would broaden the punishments and even codify them in law.

"Each of our last three presidents had high hopes for building a partnership with the Russian government," McCain said. "Each attempt failed, not for lack of good faith and effort on the U.S. side, but because Putin wants to be our enemy. He needs us as his enemy."

McCain served in the U.S. House and then was elected to the Senate in 1986, succeeding conservative Barry Goldwater. He will be 86 when his new term ends, making him one of the oldest- and longest-serving members of the Senate.