Trump brought his SCOTUS nod to a must-see TV time slot, which brought it to the people. Democrats, your move 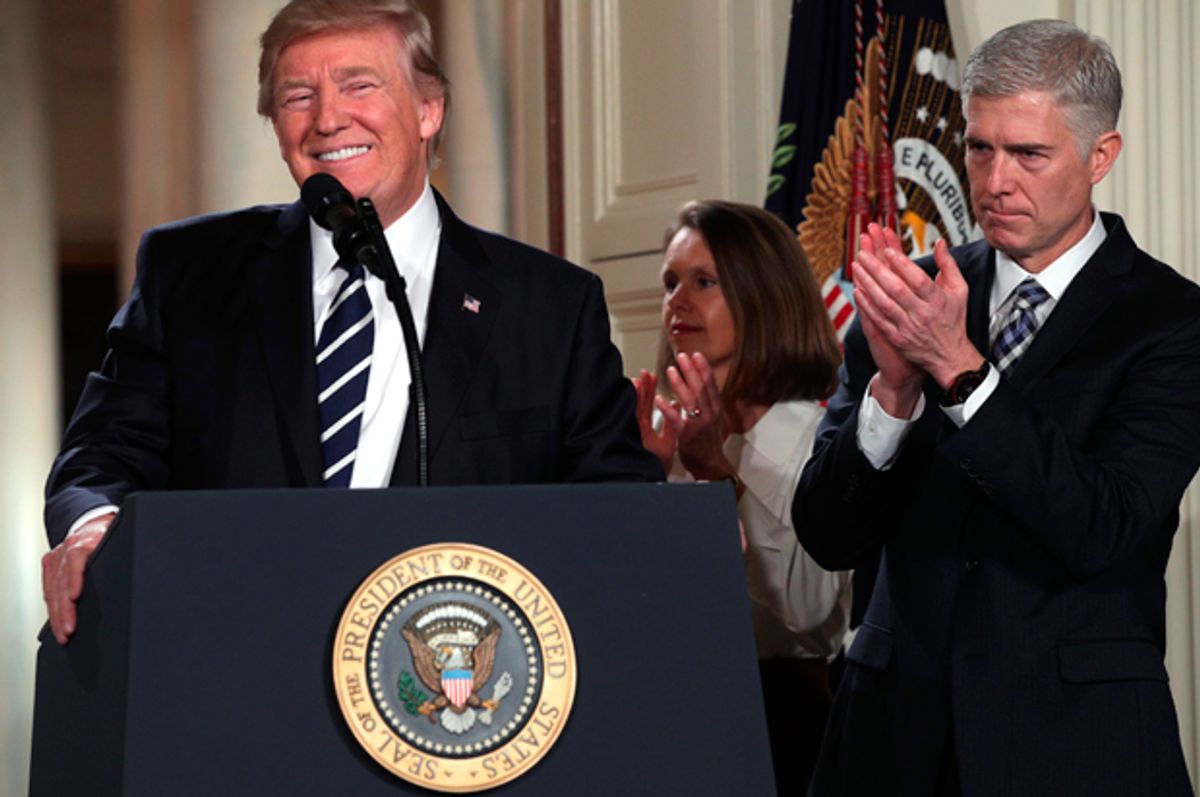 I was promised prime-time television; “Real Life: The SCOTUS Nomination” was supposed to be politics with a reality spin. You know, a dimly lit boardroom, two contestants, a decision after the commercial break. “You’re fired,” hello?

President Donald Trump’s announcement of his nomination for the Supreme Court seat left vacant by justice Antonin Scalia's death last year wasn’t a snoozefest on the level of CNN’s “Crossfire,” but, well, it was kind of meh. Sure, Trump couldn’t resist a little boasting (“This may be the most transparent Supreme Court selection process in history”) and a little lying (“I am a man of my word”). And yes, reading a teleprompter  is not something he does eloquently. But for the most part, Trump’s prime-time SCOTUS nomination special looked and sounded an awful lot like the type of thing you would see and hear from a normal president.

Gorsuch is very conservative, this much is true. His record shows him to be in strong opposition to workers’ rights and women’s reproductive rights. According to Five Thirty Eight’s metrics he’ll be a tad more conservative than Scalia and a few ticks less conservative than Justice Clarence Thomas. But essentially that places him within the bounds of typical conservative presidents’ choices.

The seeming normalcy of the ceremony and the nominee made me wonder whether all of this  was normal. Truth be told, I’ve never watched a SCOTUS nomination announcement before. They’ve always been midday affairs that get interesting afterward — you know, when the name’s announced and then not voted on for months.

Here, if nowhere else, Trump deserves credit: By moving the ceremony to prime time and by being Donald Trump, he made the SCOTUS nomination must-watch television. And by making his pick must-watch television, he did bring it to the people. The change in time slot was a signal that the pick was not just open to praise and scrutiny from wonks and media elites, but that it was a decision that the wider public should be hip to. And better yet, as fun as it would’ve been to watch, once Trump got viewers, he didn’t do anything crazy to jack up the ratings.

By playing the nomination announcement so well, Trump left Democrats needing to execute their own masterful theatrics for the next four years, a feat that seems especially unlikely considering their inability to engineer the politics necessary to put Merrick Garland’s name up for vote in the Senate.