The 2016 elections didn't just inspire women to march but to organize, and now politicians are feeling the heat 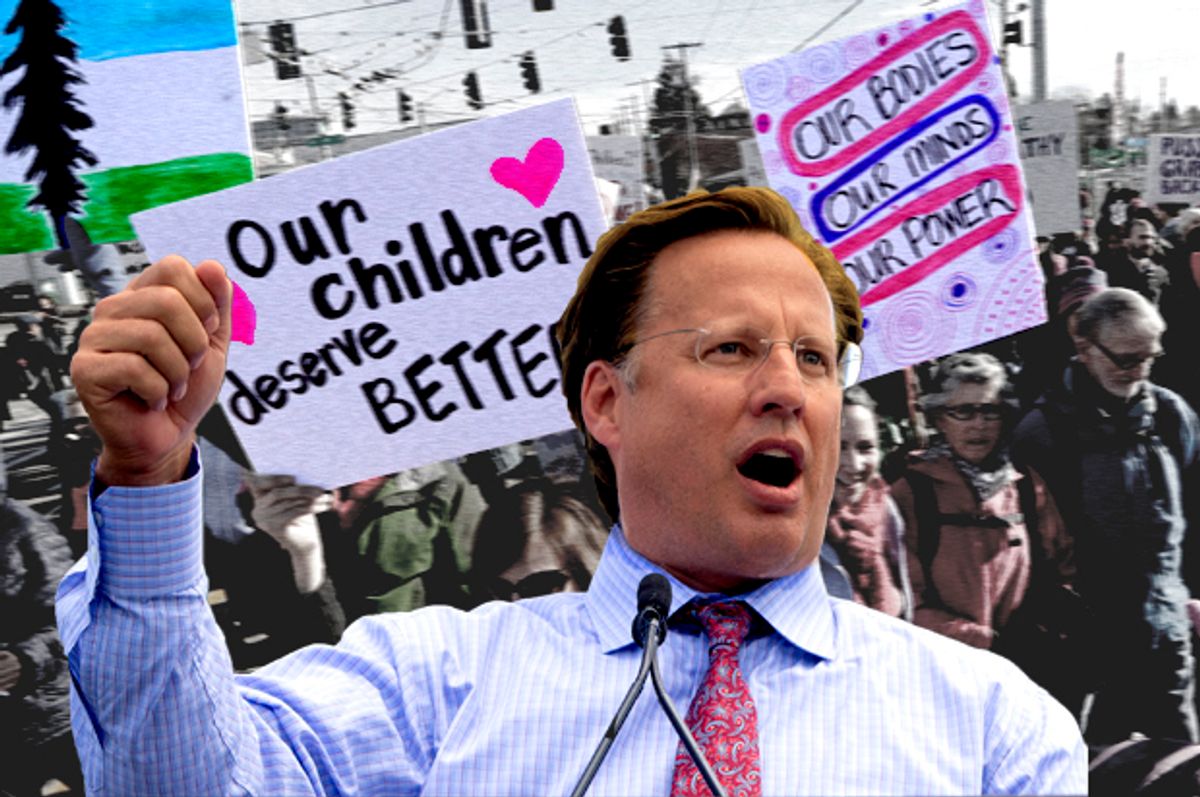 Rep. Dave Brat of Virginia, the Tea Party-backed Republican who launched a wave of right-wing revolution with his successful primary challenge of then-majority leader Eric Cantor in 2014, is not happy about having his lady constituents talking back.

“Since Obamacare and these issues have come up, the women are in my grill no matter where I go," Brat said during a private event at Hanover Tavern, as seen in a video secretly recorded by local activists who are demanding that Brat hold more public meetings to speak with constituents.

At the words "the women," the men in the audience let loose with a big take-my-wife-please chuckle, and Brat, encouraged, keeps on moaning about the indignity of having women speak to him in public.

"They come up — ‘When is your next town hall?’ And, believe me, it’s not to give positive input," he says.

In an interview with Patrick Wilson of the Richmond Times-Dispatch, Brat continued to rant about the women who are so often in his grill, accusing them of being "paid activists."

The gentleman from Virginia is not wrong that there are suddenly tons of women swarming around out there, asking questions and demanding accountability from their representatives. But they aren't paid plants.

What Brat is encountering is a grassroots uprising of women, which is happening across the nation and not just in his district.

“Women have always been the backbone [and] substantial organizing force of the progressive movement," said Jess McIntosh, a Democratic strategist, in a phone interview. "That’s not new."

McInstosh added, "But to see them out front, leading, as the voices that are getting listened to? That’s new.”

Along with a former campaign staffer for Hillary Clinton's presidential campaign, Zerlina Maxwell, McInstosh founded the newsletter Signal Boost after the election, to highlight progressive activism and writing, especially by women.

Even though it's only been a week since the Women's March, which appears to have been the single largest political action in U.S. history, McIntosh already sees signs that women are fired up and at the vanguard of protest against Trump and the ultra-conservative agenda being pushed by congressional Republicans.

“There’s a general sense that the work’s not over and women are being listened to when they call next steps," McIntosh said, citing the strong female presence among the large turnout at the airport rallies that happened over the weekend to protest Trump's ban on travel and immigration from several Muslim-majority nations.

Two of Brat's constituents confirmed McIntosh's observations that women are leading the charge for political action in 2017. Alsuin Preis and Maureen Hains are organizing a female-heavy group of residents in Virginia's 7th Congressional District, which Brat represents.

The group, which uses the hashtag #AskBrat, organized over Facebook and Twitter for a simple purpose: to get Brat to have more town halls and public meetings, instead of just fundraisers and private events.

“After the Women’s March — I know several of us had gone to it, not all of us — there was this kind of feeling, like, we went to the Women’s March and now what?" Hains said. So the newly energized community members turned to local activism, where they felt they could affect change.

But Preis, who lives in Richmond, and Hains, who lives in nearby Midlothian, said the members of the group found it harder than they initially thought it would be to receive answers from their congressman about the future of the Affordable Care Act and Donald Trump's Cabinet appointments.

They describe being stonewalled on the phone and then being unable to get ahold of Brat in person. This was particularly irritating, they both said, because Brat had repeatedly criticized Eric Cantor for being inaccessible and out of touch during their primary campaign.

In frustration, they turned to grassroots organizing and social media to pressure Brat into meeting with them. “It’s just a group of friends and friends of friends," Hains said over the phone. “You can ignore one; you can ignore 20. But you can’t ignore 700 and counting.”

Hains and Preis said it was their group's efforts that led to the anonymous video. Through the Facebook organizing, 7th District activists agreed to show up at a private event in an effort to confront Brat. One of them got into the event and was able to surreptitiously tape his ugly comments.

On the video, Brat and one of the attendees complain to each other about the women who showed up.

"They showed up here, in the lobby today, a few minutes ago," one man in the audience says.

"Right," Brat replies, in an annoyed tone, before further mocking his female constituents for their worries over the potential loss of health care, and seeming shocked that a woman who approached him was able to recite Congressional Budget Office statistics to him.

“I don’t think ‘up in your grill’ is a fair way to describe women who want to ask you some questions and hear some answers," Preis said.

“He could have de-escalated this situation very quickly, very easily, if he had answered his constituents," she added, noting that instead, Brat is receiving all these unflattering headlines and attention for his whining about "the women."

Plus, “I found it very sexist, and also demeaning," said Hains, objecting to the congressman's odd phrasing of "the women."

Both women were especially angry at Brat for his claims that his female interlocutors must be getting paid to bedevil him.

Hains and Preis both emphasized that they are new to this level of engagement in politics.

Preis immigrated from Ireland two decades ago and "became a citizen at the end of August," she said, "purely so I could vote in this election."

For her part, Hains said, “I have never been politically active in my life," adding that she had voted for Brat in 2014 and for John McCain in the 2008 presidential election. "I am just sick to death of the bull crap that is going on in Washington. I’m feeling a little helpless here," she added, saying that she had deep concerns about the potential ACA repeal, particularly about whether the law's provisions for mental health coverage would remain.

McIntosh sees women like Preis and Hains as part of a larger trend of women "who had never been involved before" becoming involved in politics and activism.

Already the Virginia activists, including Preis and Hains, have scored a political victory, in that they annoyed Brat enough that he said something obnoxious in response to their efforts, which will only bring more attention to their cause.

If Dave Brat and other conservative politicians don't want "the women" up in their collective grill, they could always try to treat them with respect and listen to their concerns. Because in the altered political climate of 2017, women are not keeping quiet.