"The Expanse": Syfy's futuristic drama returns and looks more probable than ever 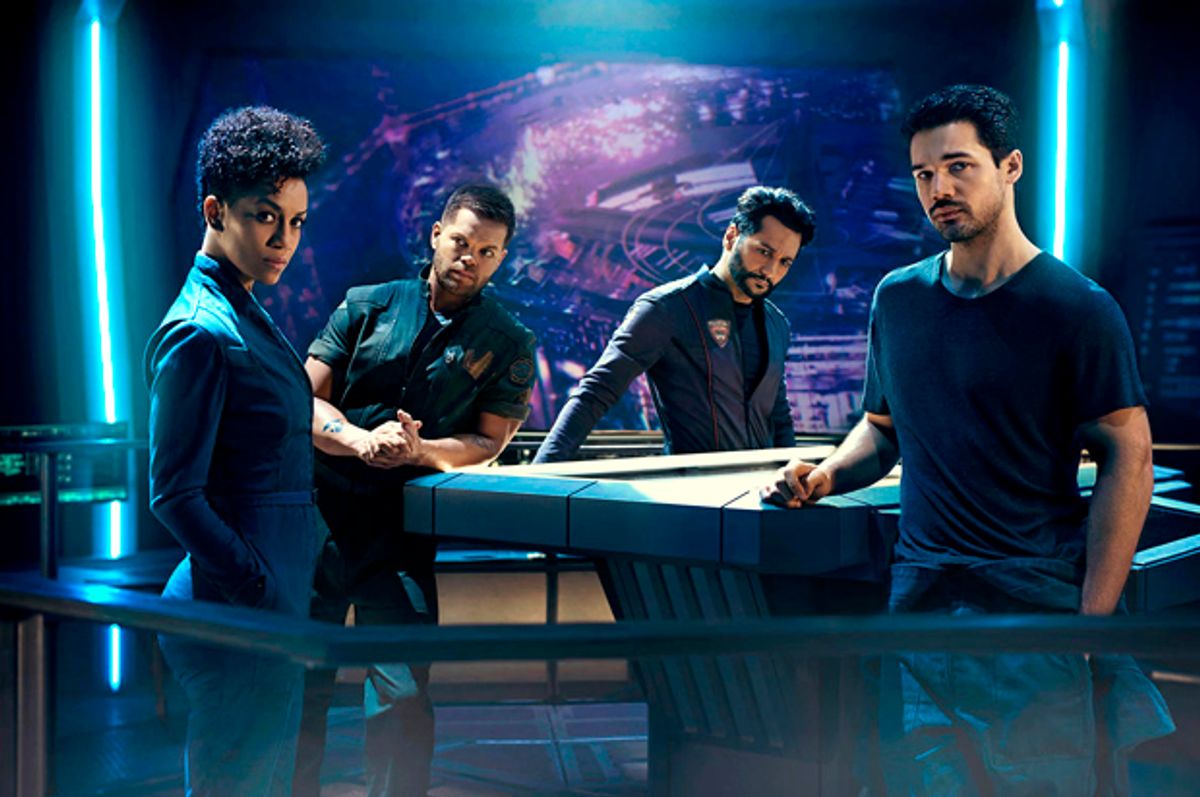 A decade ago, the world depicted in Syfy's drama "The Expanse" may have seemed light-years away, if not the stuff of pure fiction. The first novel in the series the show is based on, "Leviathan Wakes," was written in 2011, the same year that SpaceX founder Elon Musk announced his intent to send humans to Mars within the next 20 years.

Since then humans have come much closer to a future when James S.A. Corey's novels seem eerily prescient, and more quickly than one might have predicted. Many of us are likely to witness humans reaching Mars at some point within our lifetimes. Colonizing that planet as well as settling larger orbiting bodies within space, will take time — but it can happen.

Maybe, say, in 200 years? That's barely a blip on the universe's clock but long enough to colonize our solar system — and yet not nearly enough time for humankind to move beyond the same social and political tensions that have the world on edge right now.

In "The Expanse," Earth and Mars are locked in a cold war. Each planet's governing forces keep their boots on the necks of the poor and disenfranchised Belters, the people working on stations within the Asteroid Belt between two powerful worlds.

Each government fears the growing reach of terrorist factions, punishing the impoverished and professing to do so in the name of keeping the peace. Facing conflict on multiple fronts has left the entire solar system vulnerable to the whims of yet-to-be revealed players bent on turning entire planets against each other.

The second season of "The Expanse" premieres Wednesday at 10 p.m. and maintains the drama's status as one of the most compelling science fiction series of recent years. That it's also a drama speaking to the precariousness of our existence at this point in history is coincidental — somewhat.

"The Expanse" is part of a long tradition within science fiction of exploring versions of the future that result from the compromising of basic tenets of freedom and prosperity. Access to clean air, fresh water and food free of contamination, the willful erosion of liberty for the sake of safety — they all start to give by inches, often in the name of progress, eventually leading to slips, then the great slide.

A simple mystery, set in motion in season 1 that begins with a detective searching for a missing heiress, has become a conspiracy, bringing Earth and Mars to the edge of war. This conflict is tied to the discovery of a living, lethal biological entity known as the Protomolecule, a contagious agent that transforms hosts into webs of blue slime and jutting crystal clusters.

The crew of the rogue vessel Rocinante — Captain James Holden (Steven Strait), Alex Kamal (Cas Anvar), Naomi Nagata (Dominique Tipper), Amos Burton (Wes Chatham) and their uneasy ally, Detective Joe Miller (Thomas Jane) — discover this contagious, deadly entity not long before they realize it was intentionally unleashed on the people of Eros. Among the Belters, these Eros colonists are the poorest of the poor — perfect unwitting subjects for a futuristic version of the Tuskegee study.

Given the events of the past week, in which the world's professed standard bearer for democracy and liberty closed its borders to refugees from some of the most impoverished and war-torn places on the globe, this scenario no longer seems farfetched.

"You see they picked Eros to test their weapon on because nobody gives a shit about 100,000 Belters," Miller says to Holden, and as it stands, he's right. The United Nations-controlled Earth is more concerned with maintaining a delicate peace with a militarily superior Mars while holding at bay factions in the Belt, including members of the Outer Planets Alliance, seen as insurgents by the system's planetary superpowers led by a former Earth military hero named Fred Johnson (Chad Coleman).

Mars, meanwhile, has the resources to thrive in an unwelcoming environment, the technological might to dominate the system and a strong envy of Earth's natural abundance. The result is a nationalistic fanaticism, embodied by Marine 1st Lt.Roberta Draper (Frankie Adams), a loyal Martian clinging to the dream of a verdant Mars.

"The Expanse" is one of two highly addictive sci-fi series depicting humanity's grim future premiering its new season on Wednesay night. The other, "The 100," returns to The CW at 9 p.m., launching an arc that sets a timer on the full demise of mankind — again — thanks to the impending meltdown of all the world's nuclear reactors.

You could make an entire evening out of watching these convincing "what if" arguments of how and why humanity has no future, if only to give you an excuse to eat an entire pie in one sitting.

Those viewers searching for a fortified dose of hope, though, will find more of it in "The Expanse." True, society's worst ills remain uncured in Corey's tale — although this future's doctors do cure cancer, so there's that. And contrary to the sanguine outlook of visionaries such as Gene Roddenberry, humanity's drive to reach the stars has widened the gulf between the haves and the have-nots in this story.

Such a view is an extrapolation of what's happening in the real world. Remember, a private company forged in the vision of one of the planet's richest men is leading humanity's charge into space, not NASA. Spin out that idea some two hundred years into the future, and it's plausible that politicians will be clinging to the illusion of power, as the U.N.'s Chrisjen Avasarala (Shoreh Aghdashloo) seems to be doing in the show.

Avasarala and her colleagues may hold the reins of government, but the wealthiest families own the companies that deliver the water and build homes for the people living in space. Rich people control whether those living in the Belt will die of thirst, serve as guinea pigs or suddenly vanish into vapor.

An early moment of in the second season premiere shows Draper picking up a handful of dust as she stands on a rim overlooking a barren crater, then changes her view to see an image of what it'll look like 100 years hence: a green valley, with water and trees, a reminder of what she's fighting for.

Ironically this happens moments after a dialogue exchange reveals that a member of her outfit is the scion of the family that owns the terraforming equipment destined to usher that valley into existence. Draper is her superior now, but it's her charge who owns the valley, not the soldier.

The optimism of "The Expanse" exists in its adoption of another time-honored sci-fi tradition of forging rebellions from bands of unlikely players. The crew of the Rocinante was drawn into the conflict only after the water delivery freighter they were driving was blown to bits. They were truck drivers, in other words. Miller was a cop. Johnson is a war hero turned revolutionary, and the whole story began with a wealthy young woman who decided to abandon her family's money and throw in with the working folks.

Perhaps the lesson of "The Expanse" is an old one, that salvation doesn't come from governments or industry, but from individuals standing together against the stark darkness. None of the characters are pure heroes, and even the best of them are forced into bleak moral choices making them weigh the lives of the few against the well-being of an entire system. One act committed during the two-hour premiere could rightly be seen as an atrocity.

There's a price to be paid in standing for even the loftiest ideals. When Miller waves off the thought of anyone standing up to the far greater powers that run the solar system in the name of Eros, Holden replies, "They'll answer for it."

"Truth and justice," Miller cynically says. "You still believe that? After everything you saw?"