The two agreed to more military intervention in the Middle East, creation of safe zones in Syria and Yemen 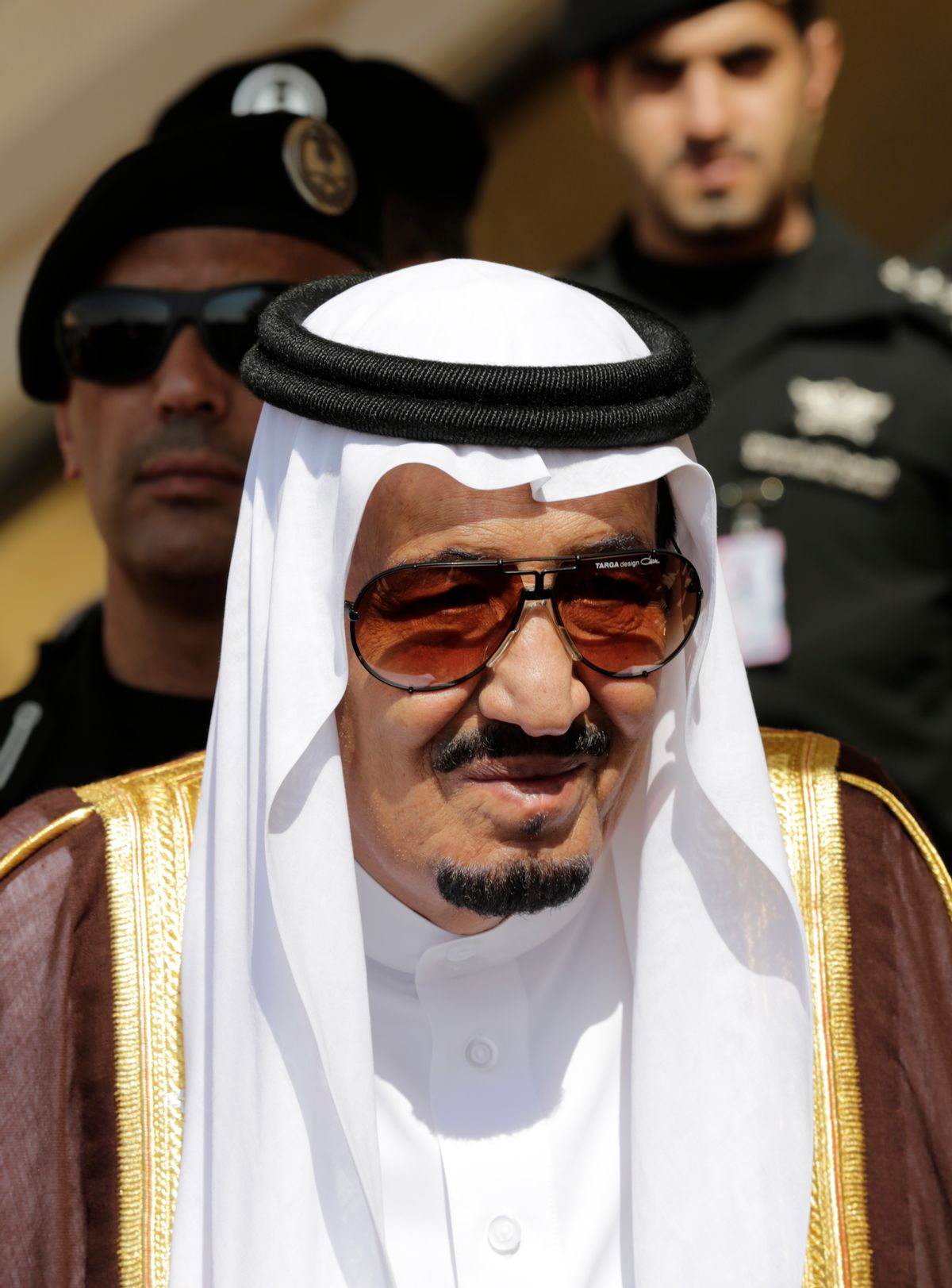 FILE -- In this Nov. 10, 2015 file photo, King Salman of Saudi Arabia waits to receive leaders during their arrival to participate in a summit of Arab and South American leaders in Riyadh, Saudi Arabia. Within hours of ascending to the Saudi throne, King Salman announced sweeping changes that would recast the kingdoms line of succession, and rework its security and economic decision-making processes. It marked the start of what would be a tumultuous year for King Salman, who completes one year as monarch on Saturday, Jan. 23, 2016. () (AP Photo/Hasan Jamali, File)
--

President Donald Trump and the monarch of the repressive Saudi regime spoke on the phone for more than an hour on Sunday. According to a White House statement, "The two leaders reaffirmed the longstanding friendship and strategic partnership between the United States and Saudi Arabia."

The official Saudi Press Agency reported that Trump and Saudi King Salman stressed the "depth and strength of the strategic relations between the two countries."

The two agreed to greater military intervention in the Middle East, and the creation of so-called safe zones in Syria and Yemen. The details of how such zones would be created are not clear, but if they were instituted, it would likely take direct U.S. military involvement.

Hillary Clinton ran her 2016 presidential campaign against Trump on a pledge to create a "safe zone" in Syria, though she had previously acknowledged that instituting a safe zone could “kill a lot of Syrians” and lead to “American and NATO involvement where you take a lot of civilians.”

Reuters reported, citing a senior Saudi source, that the two leaders "agreed to step up counter-terrorism and military cooperation and enhance economic cooperation."

The White House said Trump and Saudi King Salman also "agreed on the importance of strengthening joint efforts to fight the spread of radical Islamic terrorism."

Saudi Arabia, a close U.S. ally since the 1930s, is a theocratic absolute monarchy that brutally represses all internal dissent, beheads nonviolent protesters and funds and spreads extremist Islamism throughout the globe. A leaked 2014 email from Hillary Clinton revealed, citing Western intelligence sources, that the U.S.-backed regimes in Saudi Arabia and Qatar supported the genocidal militant group ISIS.

Saudi Arabia also has the world's second-largest oil reserves, plays a leading role in the Organization of the Petroleum Exporting Countries (OPEC), and has been offered more than $115 billion in weapons deals by the U.S. government in the past eight years. U.S. arms sales to Saudi Arabia continue uninterrupted under Trump.

While agreeing on Middle East policy, Trump and King Salman took a hard line against Iran, Saudi Arabia's arch nemesis. The White House said they agreed to address Iran's supposed "destabilizing regional activities." Reuters reported, according to the Saudi source, that, "Trump agreed with Riyadh's suspicion of what it sees as Tehran's growing influence in the Arab world."

Saudi Arabia, which speaks of itself as the "home of Islam," has remained silent on Trump's extremist anti-Muslim policy, while massive protests have errupted throughout the U.S. and the world. Iranians are the group most affected by Trump's immigration ban, whereas Saudis are not targeted.

The Saudi Press Agency summarized the discussion, writing, "The views of the two leaders were identical on the files that were discussed during the call, including the fight against terrorism, extremism, their finance, formulating the appropriate mechanisms for that, and confronting those who seek to undermine security and stability in the region and interfere in the internal affairs of other states."

The White House noted that President Trump likewise "voiced support for the Kingdom's Vision 2030 economic program," a plan to revamp the Saudi economy that includes few political reforms and does not guarantee equal rights for women, who face systematic subjugation.

The Saudi Press Agency said the two leaders invited each other to visit their respective countries.