To commemorate black history, Donald Trump celebrates Frederick Douglass for doing whatever it is he did 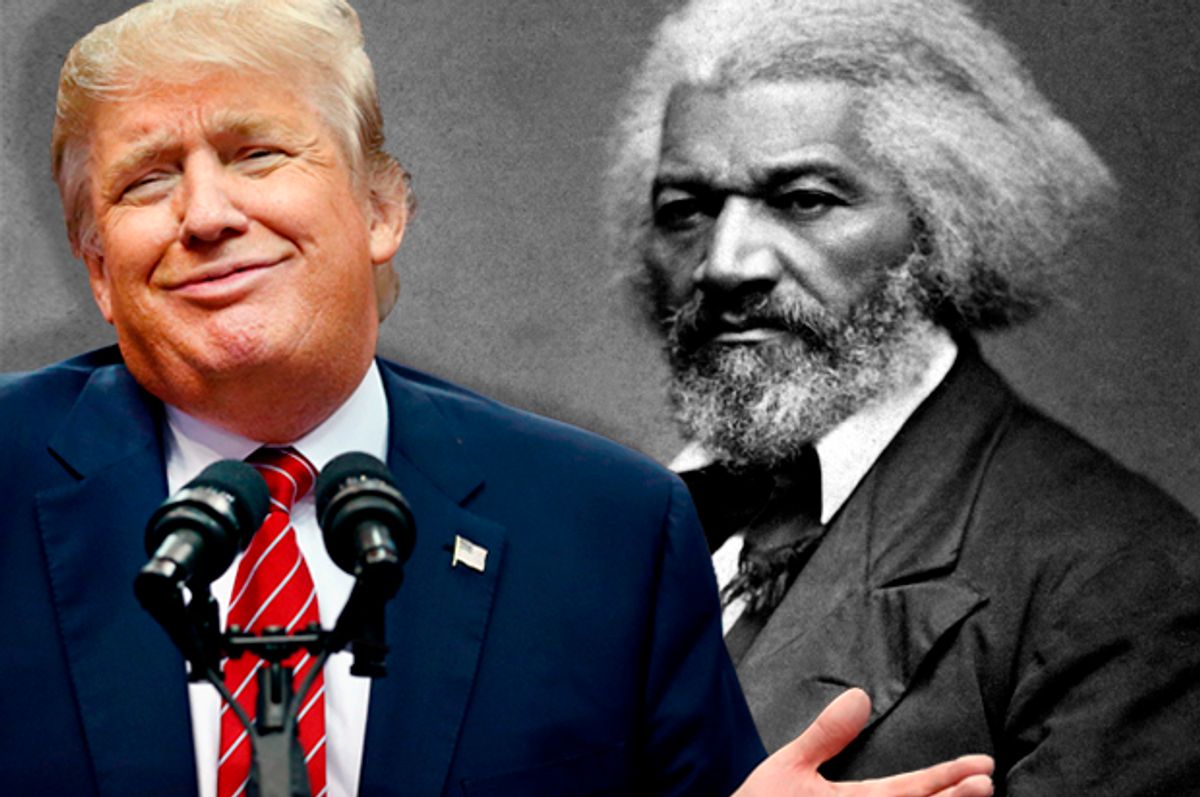 It’s pretty obvious that Donald Trump does not know why Frederick Douglass is an important figure in American history. That’s to be expected from someone who, as The New York Times put it recently, “does not read books,” and Trump has often described himself as someone who doesn’t really care for details when consuming information. Trump likely has heard the name Frederick Douglass before, and he probably knows Douglass was a human who existed and that he is significant in some way, but odds are he can’t explain why.

This became painfully clear during Wednesday morning's “listening session” organized by President Trump at the White House to commemorate the start of Black History Month. Flanked by the nominee for Housing and Urban Development secretary, Ben Carson, and reality-TV villain and White House staffer Omarosa Manigault, the president read a prepared statement referencing some famous names from the civil rights battles of the 19th and 20th centuries, including Douglass.

“I am very proud now that we have a museum on the National Mall where people can learn about Rev. King, so many other things,” Trump said. “Frederick Doug — Douglass is an example of somebody who’s done an amazing job and is being recognized more and more, I notice.”

This is the sort of thing you say about someone when you know you’re supposed to say something positive about them but you don’t know what it is. Douglass, a titanic figure in American history, whose name is synonymous with equal rights and the abolitionist movement, has done “an amazing job,” said the president of the United States. The details of the job he’s done are unimportant; it was an amazing job, and that’s all that matters.

And for that “amazing job,” Trump said, Douglass is “being recognized more and more, I notice.” Trump noticed! He noticed that the one of the most important and celebrated figures in the struggle for black equality is finally — finally — gaining some recognition. President Trump has had his ear to the ground and he’s picked up a lot of extremely positive Frederick Douglass buzz these days.

Sadly, this display of wild ignorance wasn’t the worst part of President Trump’s black history celebration. Trump’s lead-in to his Frederick Douglass remarks was a celebration of the one of the under-appreciated aspects of Martin Luther King Jr.’s legacy: the fact that Donald Trump did not remove King’s statue from the Oval Office:

The first thing that leaps to mind when reading and processing this is the incalculable distance between Trump and his predecessor in terms of their relationships to the African-American community. No president can ever replicate what Barack Obama accomplished as the first black person to be elected U.S. president, but the man who succeeded him in the office used the first day of Black History Month to perpetuate his war on the media, congratulate himself for not evicting a civil rights leader’s statue from his office, and give a fifth-grader-who-didn’t-do-the-assigned-reading explanation of a legendary abolitionist’s legacy. The person President Trump celebrated the most was himself, and the struggles he spent the most time describing were his own.

That’s all Trump knows. That’s all he cares to know. Ask him about Martin Luther King Jr., and he’ll default to a familiar reference point: the dumb statue controversy. Ask him about Frederick Douglass and he’ll say “amazing job” — the same praise he’s bestowed on beauty queens and Sean Hannity. Ask him about John Lewis and he’ll call the civil rights hero an “all talk, no action” failure because the only thing Trump cares about is the fact that Lewis criticized him. And he does this because he has no curiosity, and no ability to break free from his relentless self-focus, and no inclination to crack the spine of a book.