Trump's enigmatic Supreme Court pick: Neil Gorsuch is too conservative for many liberals, too liberal for some conservatives

Democrats may seek revenge for the Merrick Garland blockade, while some on the right suspect Gorsuch is impure 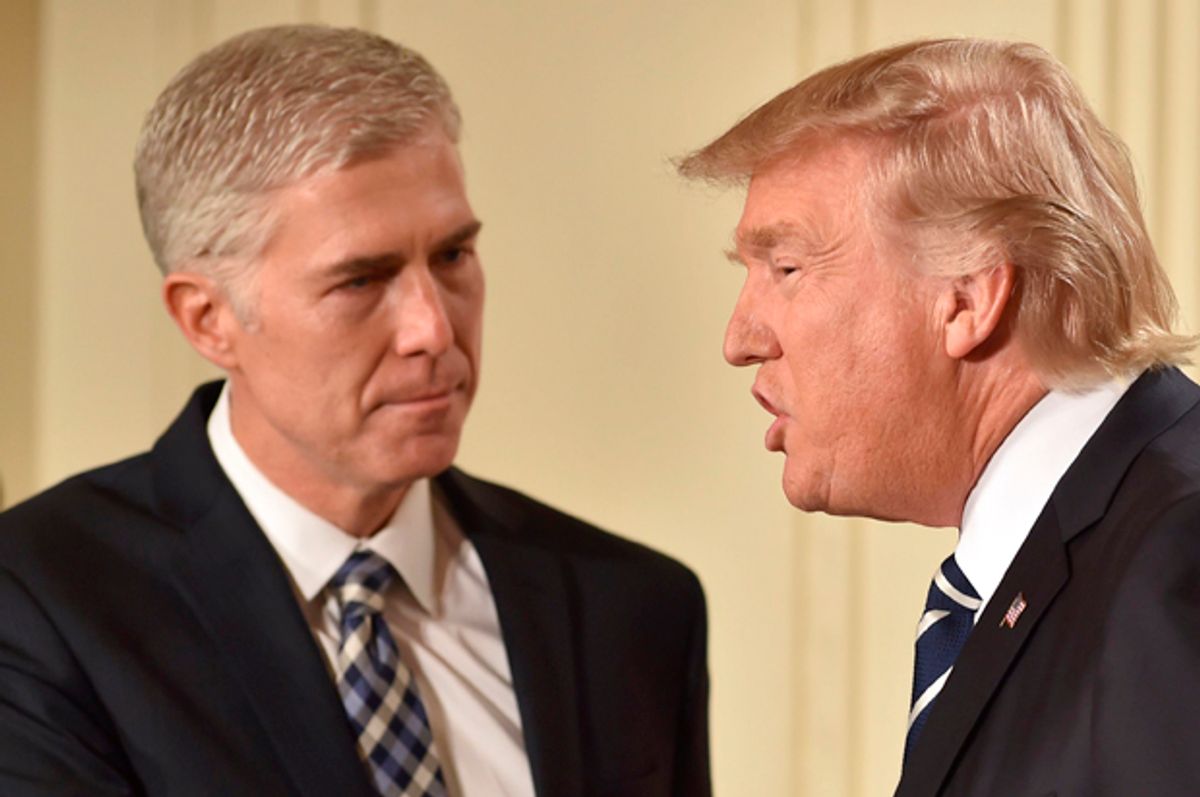 Neil Gorsuch shakes hands with Donald Trump after he was nominated for the Supreme Court, at the White House in Washington, DC, on January 31, 2017. (Getty/Nicholas Kamm)
--

At the White House on Tuesday evening, President Donald Trump announced that he is nominating Colorado federal judge Neil Gorsuch to replace the late Antonin Scalia on the U.S. Supreme Court.

In his speech, Trump noted the importance of the federal judiciary to many of his voters. Judicial appointments were a key issue used by Trump to entice wayward Republicans to back him in his presidential run. Gorsuch’s name was on a list of potential Supreme Court nominees that Trump released in September.

“Millions of voters said that this was the single most important issue when they voted for me for president,” said Trump. “I am a man of my word.”

At age 49, Gorsuch is the youngest Supreme Court nominee in decades. Like all eight current justices, he attended Ivy League schools. Gorsuch has an undergraduate degree from Columbia, a law degree from Harvard and a doctorate in legal philosophy from England’s Oxford University. He also is a former law clerk of current Supreme Court Justice Anthony Kennedy. Before clerking for Kennedy, Gorsuch worked for the late justice Byron White. While he attended Harvard Law School, former president Barack Obama was a classmate.

Gorsuch has been a member of the 10th Circuit Court of Appeals in Denver since 2006. He was appointed to the court by former president George W. Bush and was confirmed by a unanimous voice vote in the U.S. Senate. Several current leaders among the Senate Democrats were members at the time of his confirmation, including current Minority Leader Chuck Schumer of New York, Dianne Feinstein of California, Dick Durbin of Illinois and Patrick Leahy of Vermont.

Despite the fact that Gorsuch’s appeals court nomination easily sailed through the Senate, his Supreme Court nomination is likely to be far more contentious. Democrats have vowed to retaliate for Republicans’ successful efforts to block the confirmation of Obama's nominee to the Scalia seat, Merrick Garland, a federal judge. Senate Republicans refused to even hold a confirmation hearing for Garland, saying that the results of the presidential election should determine the composition of the court.

That Gorsuch would be asked to fill a vacancy for which Garland never got a hearing provides an example of the small and rarefied realm in which elite lawyers live. In a strange coincidence, Gorsuch published a 2002 essay condemning Senate Republicans for delaying Garland’s earlier nomination to a federal appeals court. The same article also chided Senate Democrats for delaying the nomination of John Roberts — now chief justice of the Supreme Court — to the same appellate court.

Since the White House revealed that Gorsuch was among the finalists under consideration, both liberal and conservative groups have been scouring his record, attempting to ascertain what his actual views might be. Progressives have pointed to his rulings that employers could refuse to provide birth control to employees and also his past writings against euthanasia and assisted suicide.

In a 2009 book, Gorsuch wrote that “the intentional taking of human life by private persons is always wrong,” an apparent rejection of any form of medically assisted suicide. In his ruling in favor of Hobby Lobby Stores, Gorsuch argued that government should not force religious people into “conduct their religion teaches them to be gravely wrong.”

While many conservatives have praised the Gorsuch nomination, some were questioning it before its formal announcement.

Andrew Schlafly, son of the late activist Phyllis Schlafly and a pro-life attorney, told The Washington Times last week that Gorsuch favors terminology used by pro-choice advocates. “Gorsuch is not pro-life,” he was quoted as saying. “That would break Trump’s pro-life pledge to pick Gorsuch.” Other conservatives have pointed to Gorsuch’s membership in an Episcopal church in Boulder, Colorado, whose female pastor attended the Women's March on Washington and has been associated with other liberal causes.

On Monday, Sen. Jeff Merkley, D-Ore., told Politico that he intended to use the Senate’s filibuster rules to block any Trump court nominee who isn’t Garland. If he and any additional Democrats follow through, this will make the Gorsuch nomination only the second Supreme Court nomination to be filibustered. The only other previous filibuster came during a 2006 effort by Democrats, including then-senator Barack Obama, to block the confirmation of Justice Samuel Alito.

There’s little guarantee that a filibuster would work, largely thanks to a rules change that Democrats made in 2013 when they controlled the chamber. That allowed lower court nominations to pass with a straightforward majority vote, instead of the two-thirds vote required to end a filibuster. Modifying that rule to include Supreme Court nominations is well within reach for Republicans since they control 52 seats in the chamber. In addition, there are at least 10 Senate Democrats up for re-election in 2018 in states carried by Donald Trump in November's presidential election.