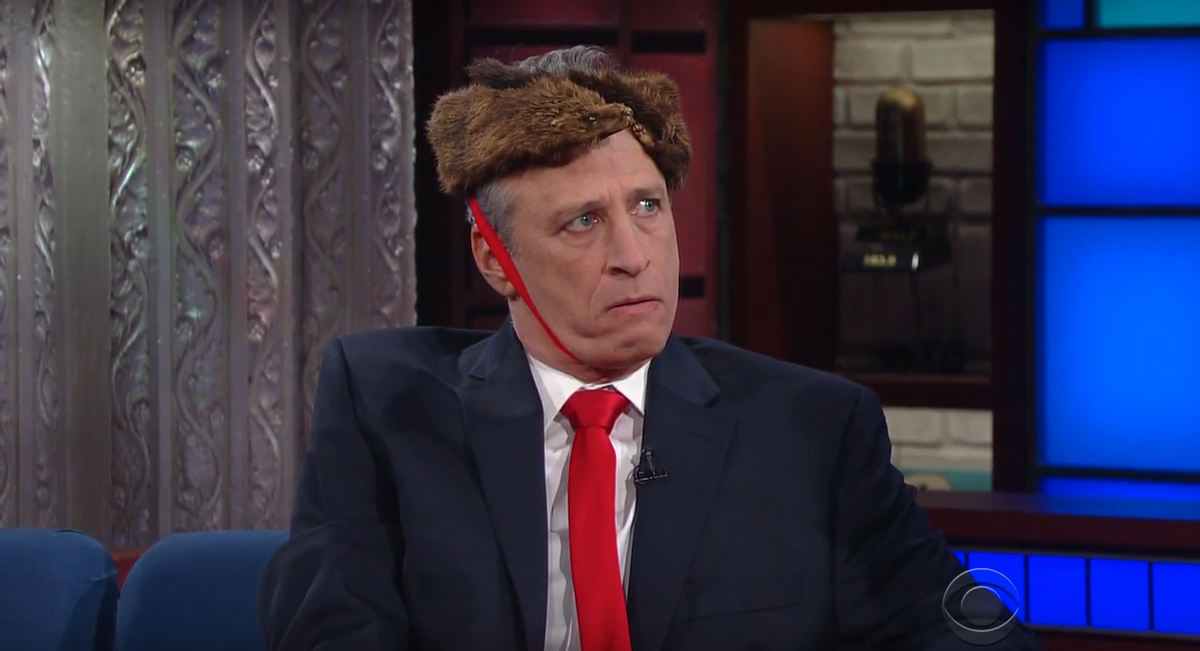 Jon Stewart emerged from retirement Tuesday night wearing a rodent on his head and a comically long tie around the neck.

"I thought this is how men dress now," he explained. "The president sets men's fashion and I saw the inauguration — super long tie, dead animal on head. It's the best."

The former "Daily Show" host has done spotty television appearances since he retired in 2015, but this was his first under the new Trump administration. Stewart stopped by the "Late Show" with his long-time friend Stephen Colbert to share possible executive orders waiting to be signed by the president.

"Executive order No. 1," Stewart read. "By the authority invested in me by the constitution, I, Donald J. Jonah Jameson Trump, hereby direct that to secure our border, China shall immediately, and without hesitation, send us their wall. Done. Boom."

The next order was a decree announcing a new official language of the United States. The final order allowed Stewart to get a few words off his chest.

I, Donald J. Trump, am exhausting because it is going to take relentless stamina, vigilance, and every institutional check in balance to keep me, Donald J. Trump, from going full Palpatine. We have never experienced this before: purposeful, vindictive chaos. But perhaps therein lies the saving grace of my Donald J. Trump presidency. No one action will be adequate. All actions will be necessary. And if we do not allow Donald Trump to exhaust our fight and somehow come through this presidency calamity-less and constitutionally partially intact, then I, Donald J. Trump, will have demonstrated the greatness in America. Just not in the way I thought I was going to.