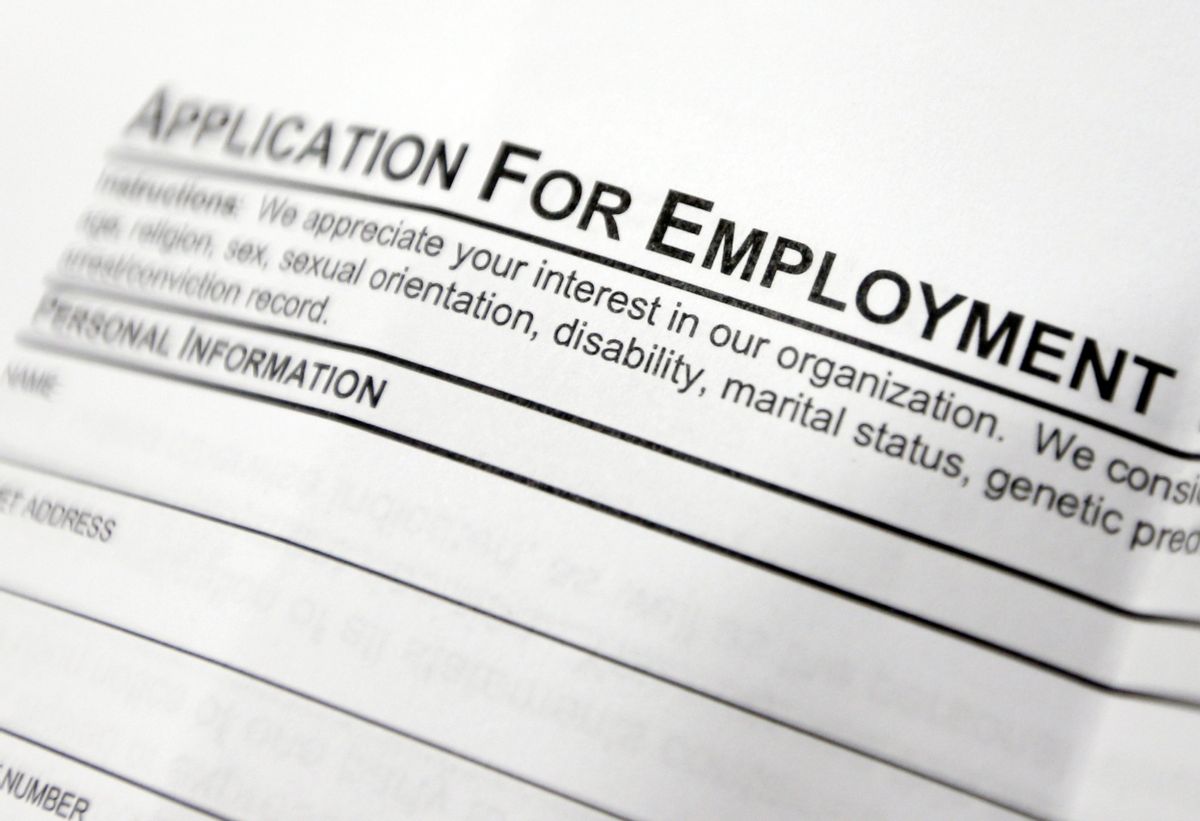 FILE - This April 22, 2014, file photo shows an employment application form on a table during a job fair at Columbia-Greene Community College in Hudson, N.Y. The Labor Department released its weekly report on applications for unemployment benefits on Thursday, Sept. 1, 2016. Slightly more Americans sought unemployment benefits during the previous week, but the overall levels still remain near historic lows in a positive sign for the job market. () (AP Photo/Mike Groll, File)
--

While the Obamas continue their break from politics by chilling out in the British Virgin Islands, the nation will soon have the final tally for former President Barack Obama’s eight-year job-creation track record when January’s official monthly employment report comes out on Friday.

Including estimates for January and pending some minor adjustments to the numbers in the coming months, the country added 11.4 million jobs, or 119,000 a month, during Obama’s eight years in office, according to the U.S. Bureau of Labor Statistics. That’s the highest rate since former Democratic president Bill Clinton’s average monthly net gain of 239,000 and way, way ahead of Republican president George W. Bush’s measly average of 14,000 jobs a month.

The average monthly hiring pace since 2014 has improved with statistics showing about 219,000 new jobs each month compared with the average of about 182,000 new jobs per month from 2011 to 2013. The monthly hiring figure is well above what’s necessary to meet the demand of new Americans entering the job market.

These numbers show that, despite President Donald Trump’s gloomy rhetoric, the nation’s labor market as a whole is better off than it has been in nearly a decade. The current official unemployment rate is below 5 percent. Labor economists consider this to be the point at which employers have a harder time recruiting and retaining workers as opportunities for better-paying jobs increase.

Data released ahead of Friday’s January jobs report also confirms that Trump is inheriting a much healthier labor market than the one passed to Obama this time eight years ago.

On Wednesday, a widely read private-sector survey  by payroll processor ADP suggested the private sector added 246,000 jobs last month, far above the 168,000 that economists had forecast. The ADP report is less reliable than the government’s figure that comes out two days later every month, but it beat Wall Street’s consensus by nearly 80,000 suggesting January was a better-than-expected hiring month. Forecasts from FactSet, Thomson Reuters, Bloomberg and PNC Financial Services Group have estimated that the U.S. Labor Department will announce that 175,000 to 200,000 jobs were created last month.

Meanwhile, the Institute for Supply Management’s latest widely watched monthly survey of U.S. manufacturing activity released on Wednesday showed an increase of 1.5 points to reach 56 on the index, above the 55 expected by economists polled by Thomson Reuters. Readings above 50 reflect growth in economic activity while readings below 50 reflect contraction. This was the 92nd consecutive monthly reading above 50.

But as anyone living in parts of the country that haven’t reaped the benefits of a postrecession recovery knows, serious problems are persisting in the labor market. Trump’s claim that the real unemployment rate is 42 percent may be one of his many false statements, but millions of Americans are indeed worse off today than they were before the global financial markets tanked the U.S. and global economies. Through aggressive personal and corporate tax cuts, the scaling back of industry regulations and restricting imports, Trump hopes to change the fortunes of these marginalized people.

The president has promised to create an unprecedented 25 million jobs over a decade, or an average of 208,000 jobs a month through 2026. While Trump is highly unlikely to be greatest jobs creator the U.S. has ever seen, he will be expected to fix the following persistent problems:

Not enough raises for working Americans

Wage growth is nowhere near where it needs to be for the typical working American. Average hourly earnings should grow about 4 percent a year to make up for inflation and give workers a little extra bump in income. Last year, the average growth in hourly wages was 2.9 percent, which was the best since the Great Recession, but it’s still unacceptable.

According to Stuart Hoffman, chief economist at PNC Financial Services Group, the official monthly hourly earnings rate is misleading. He prefers to use the more comprehensive Employment Cost Index released by the Department of Labor every three months. Considered the gold standard for measuring wage growth, the latest index reading shows that wage growth last year was closer to 2 percent than 3 percent. Most of that gain has been wiped out by inflation.

“The index does not show a significant acceleration in wages through 2016,” Hoffman told Salon. “Adjusted for inflation, frankly even if wages go up a bit I’m not sure it will cover what I think will be higher prices for energy, gasoline and some food prices.”

Indeed, inflation is expected to pick up this year even if Trump doesn’t slap price-increasing import tariffs that would hurt consumers. This means that all or some of a worker’s raises this year will be offset by higher prices.

Some areas are hurting more than others

The benefits of improvements in the labor market have been scattershot; a San Francisco software engineer is much better off than a Kentucky coal miner. While there have always been geographic differences in who benefits the most from improvements in the labor market and changes to economic policies, these days the disparities are unprecedented, with entire swaths of rural and suburban America seeing fewer benefits than workers in big cities.

This disparity played an important role in Trump’s election victory. (The crash in oil prices that causes massive energy-sector layoffs in oil-rich parts of the country didn’t help.) Voters in the areas that have been least served by the economic recovery since the Great Recession tended to vote for Trump. They will expect the president to address their concerns.

“This election showed how important the distribution of economic gains is,” Jed Kolko, chief economist at the jobs site Indeed.com, told Salon. “So even though the economy has recovered steadily, significantly there are industries, regions and demographic groups that are still struggling and facing different challenges. It will be interesting to see how these patterns will change under Trump compared to Obama.”

Though it has improved since hitting a low unseen in decades in September 2015, the so-called labor force participation is dismal. Between 5 and 6 million Americans — many of them white middle-aged men — are not considered employed or unemployed. They’ve been out of the labor market for so long they aren’t captured in the monthly official unemployment rate.

“More people have dropped out of the labor force relative to before the recession and that’s true even if we look only to people who are prime age workers who are less likely to be students or retirees,” Kolko said. “It’s still unclear how these people could re-enter the labor force if the economy is strong enough.”

Hoffman said that it’s unclear what these Americans are doing to survive. Some are living off disability benefits or relying on help from their family and church, but many, he said, are likely working in the informal economy, doing jobs off the books. Whatever the case may be, addressing  this issue will be one of Trump’s bigger challenges in fixing the lingering problems of the American labor force.