The jury's still out on Donald Trump and LGBT issues, but so far he has defied Republican anti-gay orthodoxy 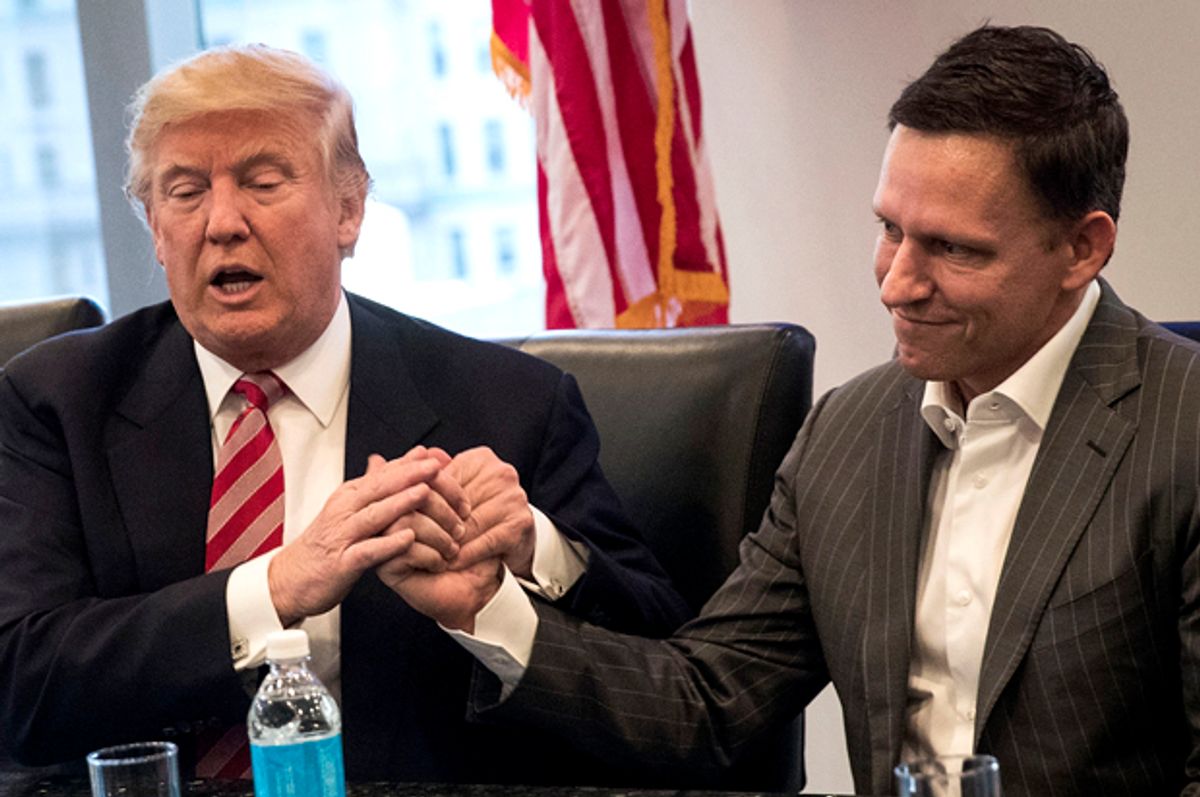 Donald Trump hasn’t yet been president for two weeks, but already he has taken numerous actions to fulfill promises he made as a presidential candidate. He has set the repeal of Obamacare in motion, implemented a travel ban for immigrants and visitors from certain Muslim-majority countries and worked closely with a conservative legal affairs group to nominate a Supreme Court justice.

While Trump’s swift actions in his early presidency have thrilled his voter base and many Republicans, there is one right-wing constituency that surely must be disappointed: conservatives who hope to roll back the expansion of LGBT rights.

It’s far too soon to write off the religious right as a political force. But it has become apparent by now that the Trump's administration has departed from traditional Republican politics when it comes to his party's unease with gays and lesbians, who overwhelmingly vote Democratic.

There were indications of this during his presidential campaign, as Trump played both sides of the fence in an unconventional fashion. He met with strongly anti-gay Christian nationalists and courted religious conservatives, yet also expressed openness to LGBT rights advocates.

In February of last year, early in the GOP primary season, the former reality-TV star assured viewers of Pat Robertson’s Christian Broadcasting Network that he would find a way to repeal the Supreme Court's  “shocking” Obergefell v. Hodges decision that gave same-sex couples the right to marry nationwide. In August Trump spoke before a gathering of an avowedly Christian supremacist organization that seeks to have members of its faith in complete control of the government.

At the same time, however, Trump sought the votes of lesbians and gays, particularly after the June 12 mass shooting at a gay nightclub called Pulse in Orlando. Since that day, Trump has tried to argue that his anti-terrorism policies would protect sexual minorities. His campaign even opened a field office across the street from Pulse.

He even adopted that message in his prime-time Republican National Convention speech. “As your president I will do everything in my power to protect LGBTQ citizens,” he said, before congratulating the crowd for offering some modest applause. Trump also allowed prominent gay Republican Peter Thiel to proclaim, “I’m proud to be gay” from the stage, something that would have been unthinkable at any prior GOP convention.

Since winning the presidential election, Trump has made it clear that despite his campaign promises to Christian nationalists, he largely intends to ignore their wishes, at least when it comes to LGBT issues. In a November interview with CBS, Trump called the issue of marriage rights for same-sex couples “irrelevant” and “already settled” by the Obergefell v. Hodges decision. “It’s law. It was settled in the Supreme Court. I mean, it’s done,” he told “60 Minutes” correspondent Lesley Stahl. “And I’m fine with that.”

Trump further angered the Christian right this week when he went back on his promise to repeal “every single Obama executive order” by refusing to revoke a 2014 regulation signed by his predecessor that prohibited federal contractors from discriminating against lesbian, gay, bisexual and transgender employees.

In a statement released by the White House on Tuesday, the administration said that the president “is determined to protect the rights of all Americans, including the LGBTQ community.”

In addition, “President Trump continues to be respectful and supportive of LGBTQ rights, just as he was throughout the election,” the statement continued. “The President is proud to have been the first ever GOP nominee to mention the LGBTQ community in his nomination acceptance speech, pledging then to protect the community from violence and oppression.”

The decision to keep the Obama executive order intact was hailed by gay and lesbian Republicans.

“Donald Trump campaigned promising to be a ‘real friend’ to the LGBT community, and now President Trump is delivering on that commitment,” said the president of the Log Cabin Republicans, Gregory T. Angelo. “Log Cabin Republicans is proud to have directly advocated for this important preservation of LGBT equality in the federal workforce.”

Despite Trump's departures from Republican orthodoxy, however, many left-leaning LGBT activists remain unconvinced that Trump is a reliable ally. There is some evidence for that opinion. After initially saying he would oppose North Carolina’s anti-transgender bathroom bill, Trump reversed himself in July, claiming that he was “going with the state” instead. Since being elected, he has not mentioned the controversy.

Many of Trump’s top advisers have been staunch opponents of LGBT rights throughout their careers, including attorney general nominee Jeff Sessions and Tom Price, secretary-designate for the Department of Health and Human Services. Vice President Mike Pence is also infamous among activists for his long record of opposing LGBT equality and for signing a bill as governor of Indiana that allowed businesses to discriminate against LGBT customers on religious grounds.

Activists are also concerned about Trump’s nomination of Judge Neil Gorsuch to the Supreme Court, noting that his opinions on two cases indicate a willingness to let religious people be exempt from laws that they consider violate their faith.

“Judge Gorsuch gained national attention for his opinions in two federal cases supporting an employer’s right to refuse to pay for contraception as part of employee health coverage if doing so violates the employer’s religious beliefs," said Equality California's executive director, Rick Zbur, in a news release. "That bodes ill for LGBT people who are facing an onslaught of laws sanctioning discrimination in the name of religious liberty.”

That assessment was shared by Rachel Tiven, CEO of Lambda Legal, a gay rights advocacy group.

“The Hobby Lobby decision set a terrible and destructive standard for bosses being allowed to meddle in our sex lives and decide whether or not birth control is covered by the employer’s insurance plan,” she said in a public statement, referencing one of the cases that Gorsuch had heard concerning religious exemptions.

In Judge Gorsuch’s decision, he calls the inclusion of health coverage that includes birth control  —  "complicity . . . in the wrongdoing of others." Even the Supreme Court, affirming that case, acknowledged how dangerous this line of thinking is: it creates a nation in which some religions are obliged to follow the law and others are not. Troublingly, Judge Gorsuch does not even see this as a problem.

Gorsuch has not, however, directly ruled on any cases related to LGBT rights so there is no clarity or certainty about his attitudes on the subject.

Some religious conservatives, meanwhile, are incensed about the direction the GOP appears to be moving under President Trump.

“God isn’t smiling on this one,” wrote Free Republic member “Maudeen” in response to Trump’s failure to roll back Obama's LGBT executive order. “Do you think the President earnestly prayed about this before making his announcement?”

“I don't think President Trump has ever earnestly prayed about anything,” wrote member Drew68 in reply.