Jordan waiting to see if Trump fulfills a campaign pledge to move the U.S. Embassy in Israel to Jerusalem 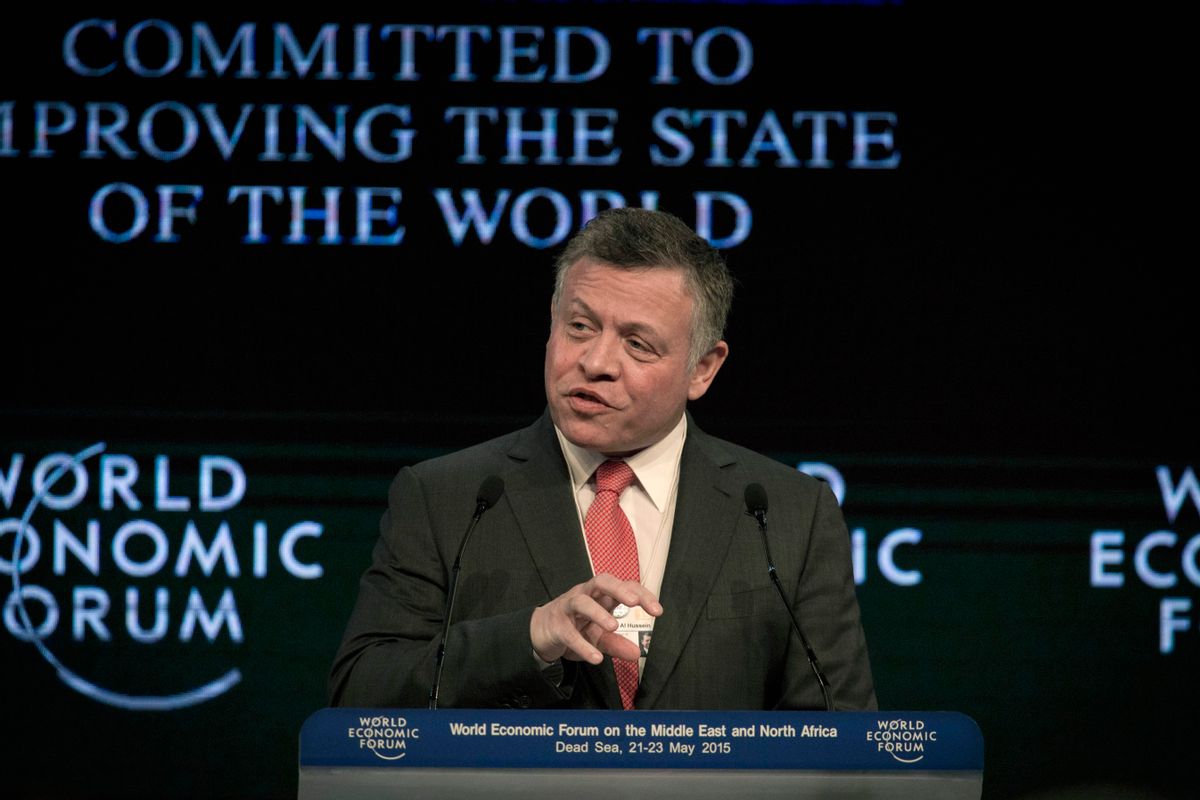 King Abdullah II of Jordan addresses the audience during the opening session of the World Economic Forum at the King Hussein convention center, Southern Shuneh, Jordan, Friday, May 22, 2015. Top political and business leaders are coming together in the Middle East at a regional World Economic Forum conference to search for solutions to widespread joblessness, which has created fertile ground for the recruitment of desperate youths by militants. () (AP Photo/Nasser Nasser)
--

WASHINGTON — King Abdullah II of Jordan's visit to Washington this week is testing President Donald Trump's ability to maintain key Arab alliances while cracking down on immigration from some Muslim countries and possibly moving the American Embassy in Israel to Jerusalem. The next few days could provide an indication if Trump is willing to compromise.

Abdullah, a close U.S. ally, held meetings Monday with Defense Secretary Jim Mattis and Vice President Mike Pence. Trump and the king were to come face-to-face on Thursday at the National Prayer Breakfast, the White House said. The king also planned to meet with U.S. lawmakers this week.

Abdullah's trip comes as the Trump administration is embroiled in its first major Mideast controversy, sparked by Trump's executive order temporarily halting all refugee admissions and suspending entry to the U.S. for citizens of seven majority-Muslim countries. Although Jordan isn't among the seven, even U.S. friends in the region fear Trump's move could embolden Mideast extremists and contribute to a perception that Washington is at war with Islam — which Trump's administration insists is not the case.

The kingdom, fighting as part of U.S.-led coalition against the Islamic State group, is closely watching to see if Trump fulfills a campaign pledge to move the U.S. Embassy in Israel from Tel Aviv to Jerusalem. Doing so could trigger widespread protests among Jordan's massive Palestinian population, potentially even jeopardizing Abdullah's hold on power.

This month, Jordan warned in unusually brusque terms that moving the embassy would cross a "red line" and could entail "catastrophic" consequences. Information Minister Mohammed Momani told The Associated Press it would be a "gift to extremists," threatening U.S. ties with Mideast allies.

The embassy was a prime topic of discussion in Abdullah's meeting with Pence, officials said. The White House said they discussed Abdullah's "views on potential changes" and how to make progress on Israeli-Palestinian peace. The Jordanian Embassy in Washington said the U.S. "committed to working closely with Jordan" on issues related to the conflict.

Jordan serves as the custodian of Islam's third holiest shrine, located in Jerusalem's eastern sector. Any U.S. rift with Jordan could spill over to the kingdom's participation in the fight against IS, a campaign both Trump and Abdullah say they hope to accelerate.

During his campaign, Trump pledged repeatedly to move the American Embassy in Israel, a promise former U.S. presidents have made and broken. Since his inauguration, Trump has backtracked slightly, with White House spokesman Sean Spicer saying the administration is only in the "beginning stages of even discussing" such a move.

Although Israel considers Jerusalem its capital, the U.S. and most countries maintain embassies in Tel Aviv. The U.S. says conflicting Israeli and Palestinian claims to Jerusalem must be worked out in peace negotiations.

Israel claims all of Jerusalem and annexed east Jerusalem after capturing it from Jordan in 1967, but the Palestinians want the capital of their future state in the city's eastern sector.

The U.S. relies on Jordan for major military and intelligence support in fighting IS, and the kingdom plays a major role in combating radicalization in the Middle East.

Both Trump and Abdullah say they want close ties. On Twitter, Trump said during the campaign he had "great respect" for Jordan's monarch. The two spoke by phone shortly after Trump was elected.

Jordan, like most U.S. allies in the region, has avoided criticizing Trump's temporary ban on refugee admissions and on travel to the U.S. by citizens of Iraq, Syria, Iran, Sudan, Libya, Somalia and Yemen.

However, the refugee measure — which indefinitely blocks Syrian refugees — could still trouble Jordan. The Syrian neighbor hosts more than 650,000 refugees from Syria's civil war and wants other countries to help resettle refugees to ease its burden.