Defeating Neil Gorsuch is a matter of political power, not judicial ideology — and Democrats must not surrender

Republicans weren't even willing to consider Obama's nominee. Democrats have no reason to treat Gorsuch any better 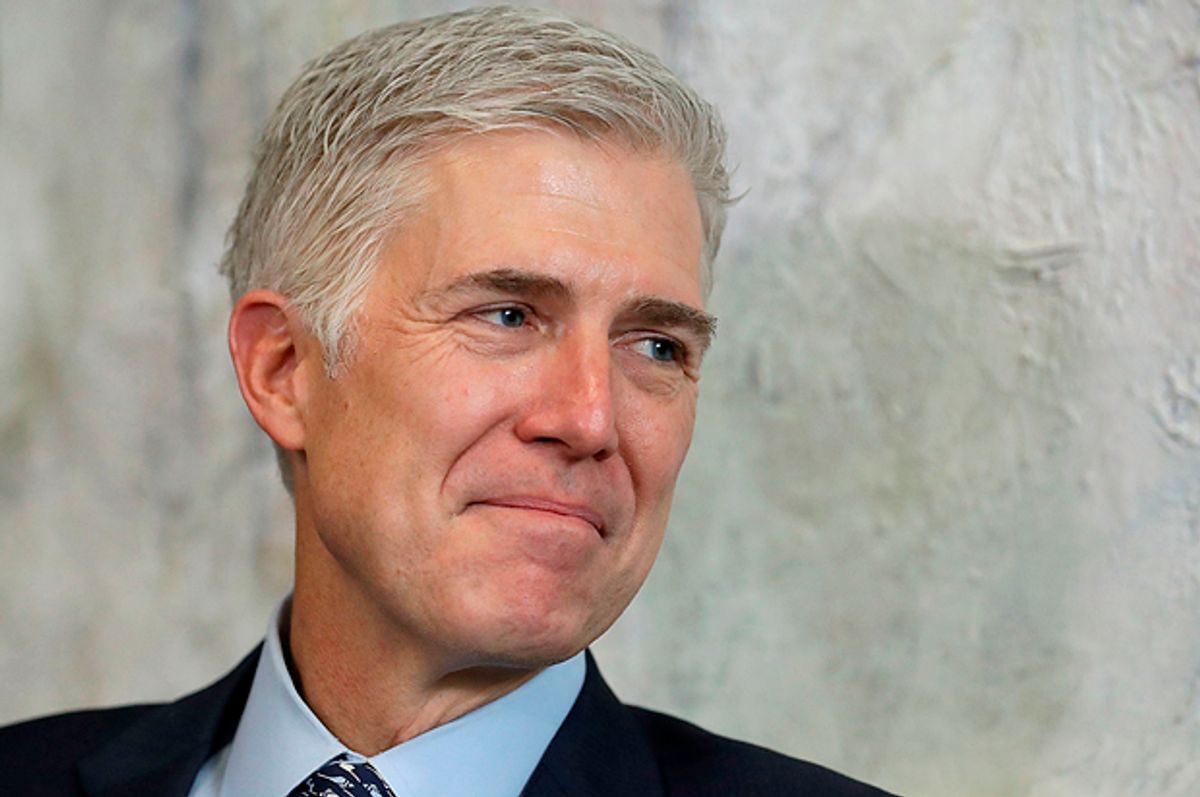 Republicans and Democrats are gearing up to turn Neil Gorsuch’s Supreme Court confirmation hearings, which are likely to start around the middle of March, into a World Wrestling Entertainment-style battle royal. Senate Minority Leader Chuck Schumer started in almost immediately after Tuesday night’s announcement of the judge's nomination to replace Antonin Scalia on the high court, saying Gorsuch “hewed to an ideological approach to jurisprudence that makes me skeptical that he can be a strong, independent Justice on the Court.”

Schumer has suggested he will lead a filibuster of the Colorado judge's nomination, meaning Republicans will (at least in principle) need to convince eight Democrats to break ranks. Other members of the minority party stressed that Gorsuch is outside the judicial mainstream, a far-right friend of corporations and Christian fundamentalists at the expense of working people, women’s health and minority rights.

Statements from Democrats so far have mostly given short shrift to the saga of Merrick Garland, former president Barack Obama’s nominee to fill Scalia’s seat. While all the Democrats’ ideological reasons for opposing Gorsuch are perfectly reasonable — Esquire’s Charles Pierce has wondered whether the judge is so far to Scalia’s right that he wears bearskins to work — there is an even simpler reason for the party to do everything in its power to keep Gorsuch off the nation’s highest court.

It was Garland’s bad luck to earn his nomination at the tail end of an era when Republicans shredded every legislative and procedural norm that once kept Congress more than minimally functional. The GOP strategy of saying no to literally every single Obama initiative, all in the pursuit of regaining congressional majorities, has turned the Senate into a pallid imitation of the rowdier House of Representatives, which the upper chamber was explicitly designed to counter.

So Judge Garland became one more sacrifice to Republican obstructionism, a fate that had nothing to do with his experience, personality or qualifications to sit on the Supreme Court. His nomination existed almost separately from his person, the open seat he was to take held up by Donald Trump on the campaign trail as “belonging” to conservatives, as if the Constitution called for some partisan or ideological balance on the court.

Republicans would like Democrats to treat Gorsuch as the Senate has traditionally dealt with Supreme Court nominations in the past, when senators gave a president a great deal of leeway on his nominees and a justice as radical as Antonin Scalia was confirmed by a Senate vote of 98 to 0. But treating Gorsuch as SCOTUS nominees have been treated in the past would normalize the unprecedented tactics Republicans employed with Garland. No president would ever again be able to nominate a Supreme Court justice unless his own party also held a Senate majority. Democrats would be complicit in the destruction of yet one more of the long line of norms Republicans spent the entire Obama era smashing to bits.

Perhaps anticipating the accusations of blame about to descend on their heads, conservatives have been throwing out a blizzard of arguments meant to obscure their responsibility for this impasse. Hugh Hewitt wrote a disingenuous op-ed for The Washington Post, trying to blame Harry Reid’s 2013 nuking of the filibuster for all judicial appointments below the Supreme Court level for “breaking” the Senate, without acknowledging that Reid’s actions were spurred by the GOP’s fervent and unprincipled obstructionism.

In the same newspaper, Jonathan Adler, a law professor, tried to conflate the Garland saga and past Supreme Court filibusters by Democrats. His argument misses the key point, which is that Republicans took opposition one step further by never holding confirmation hearings or even pretending to consider Garland’s nomination. This was an unprecedented action that weaponized majoritarian power in a way that broke new ground in the Senate. It is this weaponization that Democrats must object to when considering Gorsuch’s nomination.

Democrats cannot simply refuse to hold hearings for Gorsuch, as they do not control the majority. But to accede to Republican demands that Gorsuch be considered on the merits of his ideology and his fitness as a justice is an unacceptable form of surrender. It would ratify the new precedents invented by the GOP to justify their actions with Garland, which will bleed over into other Senate business if it hasn’t already.

This is not about grabbing back a “stolen” Supreme Court seat. This is about a principle of republican government that the GOP has smashed. Had the party considered Garland’s nomination and then shot him down in a fair and open vote, Democrats would have no argument here. But the unprecedented obstructionism of the Republican Party makes Gorsuch’s confirmation a proxy in a larger fight that is about the nature of political power, not ideology. And the language of power is the only one the modern Republican Party seems to understand.