Obamacare repeal is stuck, but Paul Ryan tries to create the illusion of legislative motion

The “repeal and replace” effort on Obamacare has stalled, unless you count Paul Ryan’s cable news hits 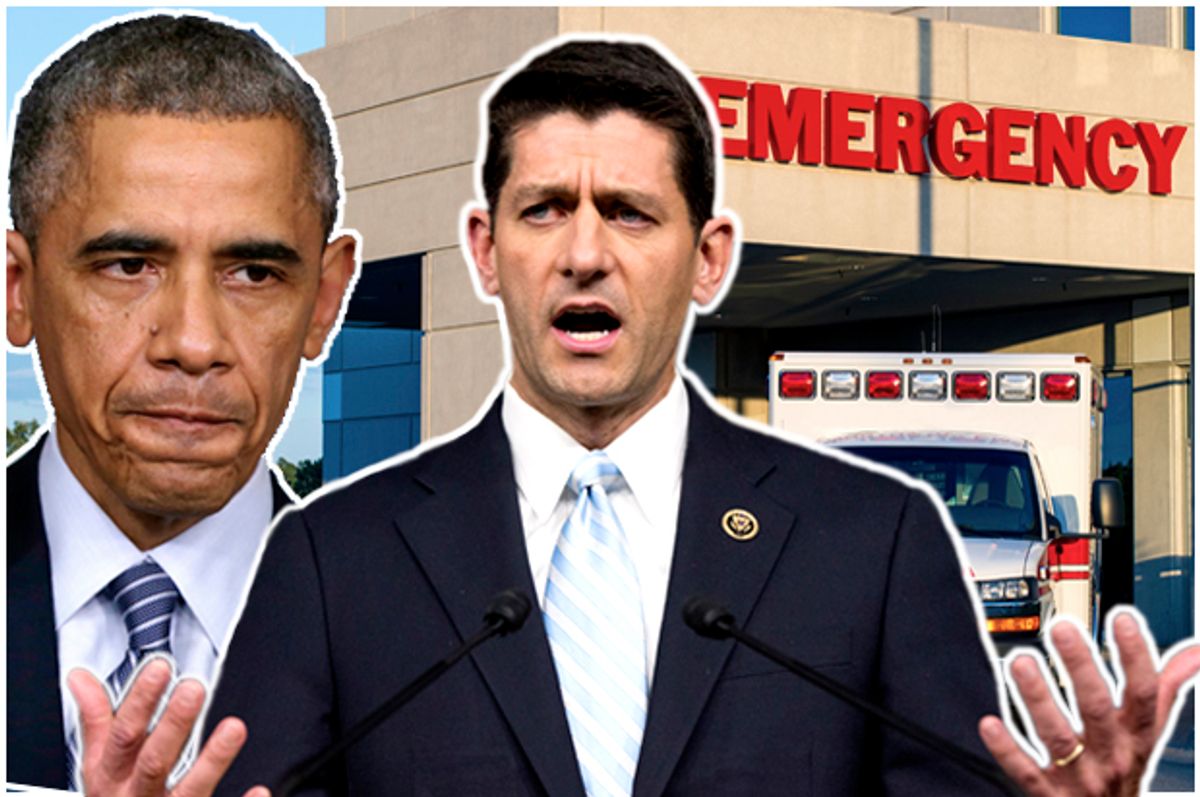 As many people on the left have been pointing out for a good long while, the Republican promise to “repeal and replace” the Affordable Care Act is a far, far more complicated task than the oft-repeated talking point conveys. Ever since Republicans won control of both the White House and Congress, they’ve been promising quick action to expunge the health reform law and get cracking on passing their own bill. But, as The New York Times reported this week, the “repeal” portion of the process has stalled out.

There are several interlocking reasons why Republicans have hit a wall. The first is that health care policy is extremely difficult to draft and piece together. The second is that Republicans have largely avoided any serious effort to grapple with the complexities and tradeoffs that come with drafting health legislation, so they have no agreed-upon legislative framework. The third is that the Affordable Care Act has successfully expanded coverage to millions of people, and Republicans are acutely aware that a more “conservative” alternative to the legislation will almost certainly result in people losing coverage in some way.

But just because the ball isn’t rolling on Obamacare “repeal” doesn’t mean that Republicans can’t try and create the illusion of movement — which is where Paul Ryan comes in. The speaker of the House has been the chief spokesman for the health care law’s repeal and has frequently stressed the urgent need to “save” America from “collapsing” Obamacare. Given that he’s pressed the case for quick action, Ryan can’t admit that the process has ground to a near halt.

Instead, he’s pressing the counterargument that actually in recent days Congress has made “a lot of progress” on Obamacare's repeal. “This week, a few House committees held hearings to discuss fixing our health care system by way of repealing and replacing Obamacare,” the speaker’s website reads.

Ryan pointed to the Energy and Commerce Committee’s subcommittee on health, which held a hearing to discuss four pieces of legislation. Of the four bills that were discussed, three actually involved minor tweaks to the existing health care framework (the other was a measure to deal with pre-existing conditions following an Obamacare repeal). Ryan also referenced a second health subcommittee hearing this week that took on the pressing question of whether lottery winners should be eligible for Medicaid coverage. Lastly, Ryan directed our attention to an Education and Workforce Committee hearing in which a handful of small business owners testified that Obamacare is, in fact, bad.

In addition to tackling the critical legislative issues surrounding lotto winners, Ryan has “kept the drumbeat going this week” about the need for Obamacare's repeal. Per the speaker’s office, that drumbeat was heard far and wide as Ryan “talked about it with Republican leaders, during his weekly press conference, on Fox & Friends.”

That’s right: “Progress” toward Obamacare repeal now includes going on a cable news morning show to talk about Obamacare repeal. If that were the case, one would think the Affordable Care Act would be long dead by now, given that Republican leaders have gone on Fox News to complain about Obamacare just about every day for the last seven years.

Meanwhile, in the real world, the push to repeal the Affordable Care Act seems to be backsliding a bit as Republican officials struggle with the dangerously complex politics of health care reform. Some top GOP senators are now talking about an Obamacare “repair” mission to buy themselves time to come up with the long-promised (but never delivered) replacement plan. Hovering above all of this is President Donald Trump, who keeps saying that he wants quick action on health care but doesn’t seem to actually have a plan.

So Paul’s Ryan’s fumbling around on this Obamacare repeal “progress,” while silly, also helps confirm what everyone else can already see: Obamacare repeal is stuck. If it weren’t, Ryan would have something to talk about other than his face time with Steve Doocy.