The wheels come off in the television take of "Training Day" 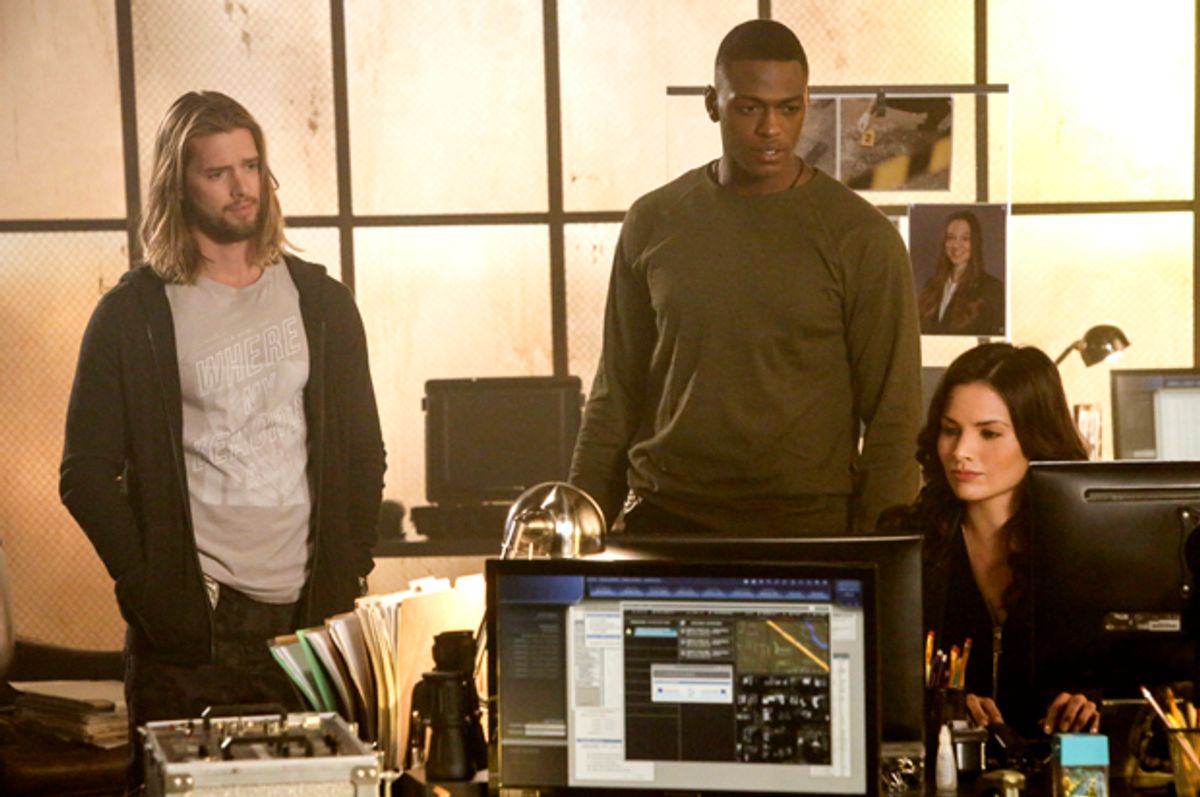 If you watched CBS’s TV incarnation of “Training Day,” hoping to revisit the 2001 film that inspired the series you could be forgiven for being disappointed.

Any other open-minded viewer could well have enjoyed this overwrought revisit set 15 years following director Antoine Fuqua’s provocative examination of whether the ends justifying the means. In the film, the audience viewed the gripping power dynamic in play during a ride along with Ethan Hawke’s Boy Scout cop and the corrupt Los Angeles Police Department officer evaluating him, played by Denzel Washington.

Paxton has the chops to deliver award-worthy performances, understand. He’s been nominated for many industry honors, including scoring three Golden Globe nods for his superior, multilayered performance on HBO’s “Big Love.”

As “Training Day” antagonist Frank Rourke, a wild-eyed “shoot first, who cares about the questions?” kind of rogue, Paxton’s performance lands somewhere between full-tilt David Caruso and boozy mechanic. He’ll fix your jalopy, damn it, but you can’t be sure that he won’t accidentally leave a knotted pile of flammable shop rags under the engine block.

Under the right circumstances (an appealing story arc, clever tongue-in-cheek writing), Frank Rourke could have been a lot of fun to watch. But “Training Day” fails to provide any such material for Paxton, relying instead upon the audience’s presumed obsession with flying bullets and ridiculous villain stereotypes.

One item in its favor, though, is the laughable dialogue. To characterize the lines flying out of the cast as sophomoric doesn’t cover it. The lines are so astoundingly amateurish that some scenes nearly careen into comedy. This is the kind of terrible show that plays on a TV screen within a sitcom, with characters busting out punchlines to drive home how bad it is, this atrocity they're watching.

Only this time, that comedy is just our lives. Joke’s on us.

That said, watching a yakuza gunman opening a tense standoff in a future episode by growling, “Konichiwa, assclowns” caused my most productive spit take in ages. That has to be worth something.

The shell of the original “Training Day” can be seen here, somewhat, in Cornwell’s Kyle Craig, a African-American cop (the racial dynamic is switched here and barely acknowledged because — CBS) who takes only the risks that are necessary to ensure the safety of innocents. His role in bringing an explosive standoff to a close draws the attention of LAPD Deputy Chief Joy Lockhart (Marianne Jean-Baptiste), who embeds Kyle with Frank’s crew in the hopes of nailing Frank to the wall for illicit off-the-books behavior.

And Frank is a dirty, dirty cop. Dirty! The moment we meet him, he gets a kid to steal some candy out of a machine. Next, he’s setting a gangbanger’s house on fire, mostly for kicks. Soon enough we find out that his longtime girlfriend Holly (Julie Benz) is a madam with a heart of gold (there is no other kind) and very nice shoes. Yes, Frank and his gang in the special investigation section revel in blurring or erasing the line between perpetrators and badges, because the streets are just that mean.

The TV version of “Training Day” is executive produced by Jerry Bruckheimer, whose name is attached to a number of CBS’ monster hits, including “CSI: Crime Scene Investigation” and all its spinoffs, “Cold Case” and “Without a Trace.”

Here, he gives viewers odd take on the CBS “crime-time” brand, which is currently dominated by the stalwart heroes of the “NCIS” franchise. Injecting a team that explores the grayer shadows on the law enforcement side ostensibly lends some balance to the lineup; too many white hats in the mix becomes boring after a while.

But as compromised cops go, Frank isn’t even that engaging. He’s just a stubbly faced guy with a overemphasized cowboy swagger. That’s the twist as well as the lure in “Training Day,” built upon a concept that’s boring and a bit troubling at the same time. In a sense, this is CBS’ foray into the bold new universe of law and order-obsessed America without actually being, you know, a Dick Wolf kind of show.

Here we have a trigger-happy guy flanked by, and here’s the direct description from the CBS press release, “Rebecca Lee (Katrina Law) a formidable officer with killer aim and a dark past, and Tommy Campbell (Drew Van Acker), a former pro surfer who follows Frank’s orders without hesitation.”

Together, with Kyle’s help, they stampede through the mean streets of L.A., depicted as a crime-infested nightmare straight out of the Orange One’s imagination, where even the kids on bikes are mean mug community gardeners. Sexy Rebecca, slouchy Tommy, swaggering Frank and Kyle, the nice guy who thinks he can tame Frank’s alpha, scrub away crime with bullets and baseball bats. They may break a lot of laws and some bones, but at the end of the day, justice is served.

If it were slightly less dreadful, it might have been perfect.