Former Bush speechwriter Michael Anton is revealed as "Decius," a leading intellectual of the Trump revolution 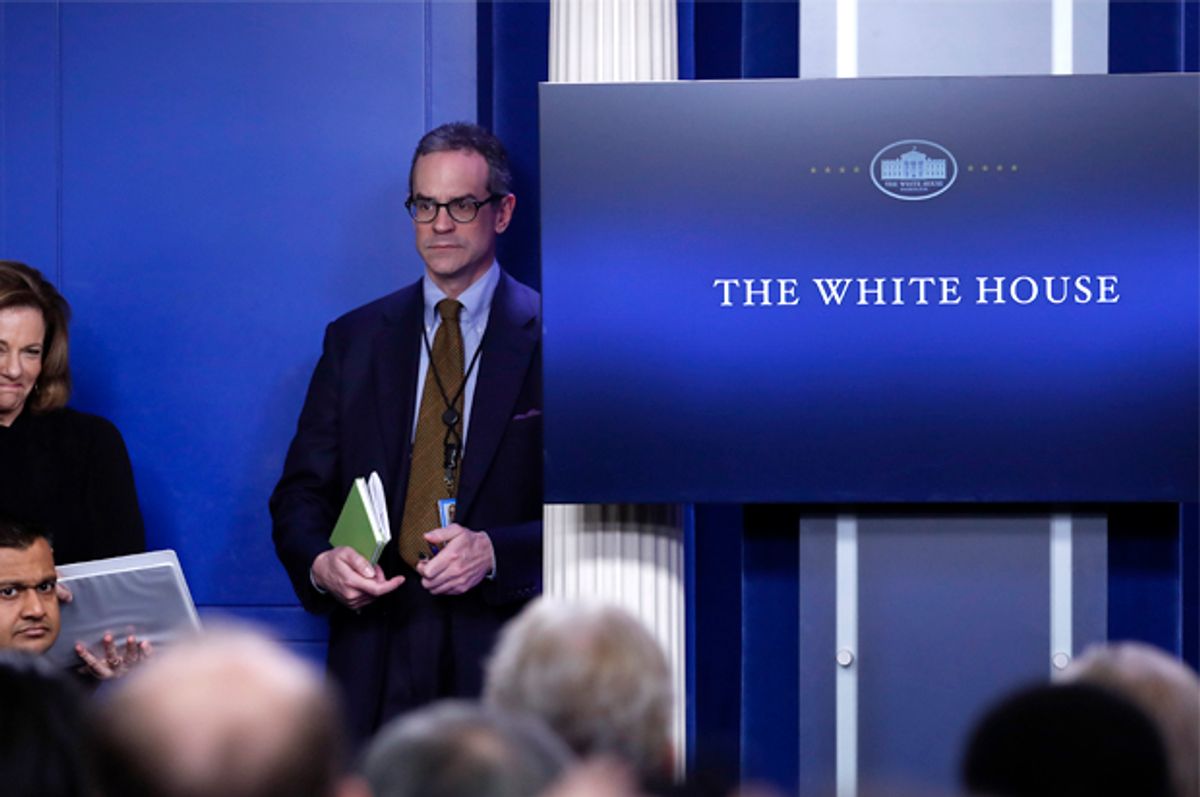 One of the more jarring aspects of the Donald Trump era is the bedrock belief among his core supporters that he represents their last best chance to save a country that has devolved into a dystopian hellscape. They see the Obama years as a conscious destruction of civil society through politically correct racial McCarthyism, confiscatory taxes, overbearing regulation, religious oppression, rampant crime and disarmament of the populace. This is not the America that most of us recognize as the one where we live. But for legions of Trump voters, it's the Obama America they saw on Fox News, heard about from Rush Limbaugh and read about on Breitbart News for nearly a decade.

This is the version of reality Donald Trump learned about when he had his flunky listen to talk radio for him and type up all the high points. It's where he found out about the supposed horrors of Common Core and the "traitorous" Sgt. Bowe Bergdahl, who Trump believes should have been summarily executed. And Trump's America is a place perceived by a rich man who sees the country only from overhead in his Boeing 757 or through the tinted windows of his Escalade as he travels highways at breakneck speed on his way to a rally.

Recall that Trump actually said at a rally in Virginia that Harrisburg, Pennsylvania, "looked like a war zone" when he flew over it the previous day:

I looked down, and I looked at, it looked like a war zone where you have these massive plants, and you can see 25 years ago, vibrance. Families being taken care of. Work. Education. Health care. People working. It's all in Mexico now. The businesses have moved to Mexico. And other places.

In truth, Harrisburg is a bustling middle-sized city, the state capital of Pennsylvania and center of a robust local economy. Even in places where factory jobs actually have left over the past several decades and people are economically insecure, their lives can't be reduced to this depressing stereotype.

Trump is similarly simplistic in his clear assumption that African-Americans all live in squalid and violent urban ghettos, repeatedly insisting that people cannot walk down streets in these locales without being shot down by marauding criminals. This is not true either, of course. There are certainly violent neighborhoods in American cities, but crime is way down from its peak a couple of decades ago. Trump seems to be stuck in the New York of the 1970s when crime was spiraling out of control and parts of the city were gritty and grim, as historian Rick Perlstein pointed out in a Salon article:

Think of Trump coming of age in the New York of the 1977 blackout, the search for the Son of Sam, and Howard Cosell barking out “Ladies and gentlemen, the Bronx is burning” during Game Two of the World Series at Yankee Stadium as a helicopter hovered over a five-alarm fire at an abandoned elementary school (40 percent of buildings in the Bronx were destroyed by the end of the 1970s, mostly via arson — often torched by landlords seeking insurance windfalls).

Think of Trump learning about the ins and outs of public life in this New York, a city of a frightened white outer-borough middle-class poised between fight or flight, in which real estate was everywhere and always a battleground, when the politics of race and crime bore all the intensity of civil war.

Trump calls himself the "law and order president" and he is going to let the police take off the gloves and set things right. But it isn't 1977 anymore, and the country he is "saving" today is one that lives as much in his imagination as the utopian 1950s that he promises to return us to.

As we know, Trump isn't alone in his belief that the United States is on the verge of economic and social collapse. His followers believe it, too. Right-wing media outlets constantly advance this idea, even as they busily count their millions. For decades they've made a profit out of saying that the country's going to hell. But they aren't the only ones. Conservative intellectuals have bought into this fantasy as well.

The Weekly Standard's Michael Warren announced on Thursday that the author of some notorious essays written under the pseudonym Publius Decius Mus is actually a former George W. Bush speechwriter named Michael Anton, who has now joined the Trump administration as a national security adviser. (Anton's pseudonym apparently refers to a Roman general who sacrificed himself in battle.) He has been glimpsed briefly in the White House press room — as in the photo accompanying this article — but as yet has taken no public role in the administration.

These essays, posted on a couple of different websites throughout the presidential campaign, thrilled elite Trump supporters like Rush Limbaugh, who were being pressured by the "Never Trump" faction among old-line conservatives. The most famous of Decius' prose works was called "The Flight 93 Election," an allusion to the doomed plane that was headed to the White House on 9/11 and went down in a field in Pennsylvania after passengers overran the al-Qaida hijackers.

In Anton's telling the plane is America and conservatives are the heroic passengers who say "Let's roll" and charge the terrorists who are, of course, liberals and immigrants. He suggested that even if a Donald Trump presidency led to a metaphorical plane crash, that would be better than a Hillary Clinton victory, which he predicted would result in “vindictive persecution against resistance and dissent.” (Presumably all the Clinton voters would be gleefully chanting, "Lock them up!")

But Clinton was not the real danger to America in this telling, merely the mechanism for what he believed is a foreign invasion:

The ceaseless importation of Third World foreigners with no tradition of, taste for, or experience in liberty means that the electorate grows more left, more Democratic, less Republican, less republican, and less traditionally American with every cycle.

As you can see, "Third World foreigners" and the "left" are not traditionally American in his view. Their children are being spawned for the purpose of forming a permanent class of rulers dedicated to oppressing the white and native-born "real"Americans who have the only legitimate claim to the country. Anton passionately declared, “I want my party to live. I want my country to live. I want my people to live.”

The "people" Anton referred to are the same ones Trump calls "the forgotten people," the only citizens he believes he has any responsibility to represent, the people who think the liberal, foreign hijackers took over America in 2008. They believe they saved their desolate, destroyed hulk of a country by taking on these invaders and voting for the avenging angel Donald Trump. Unlike their heroes aboard Flight 93, who gave their lives to spare the lives of others, they're steering the plane directly into the White House themselves.