Daily life in Cuba is a struggle for all, but is especially challenging for young, destitute people who want more 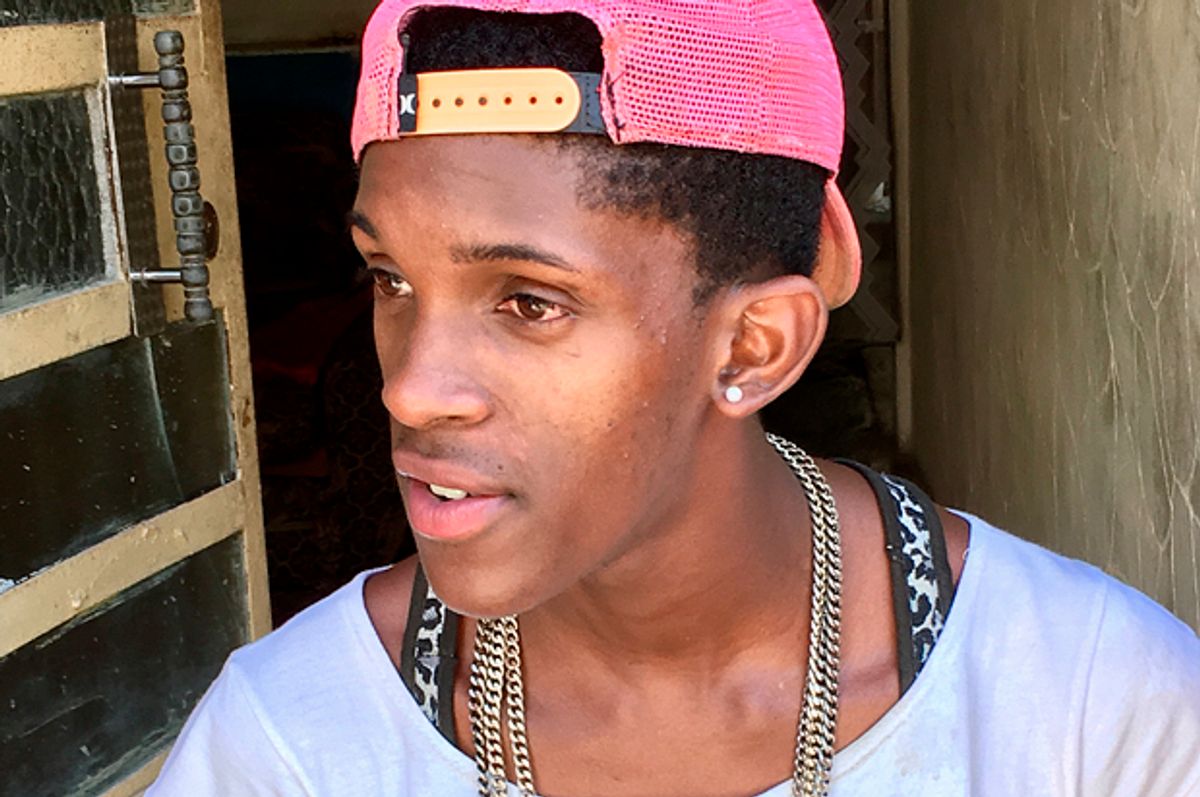 Jerzon, a young professional dancer, has a conversation with tourists in the Callejon de Hammel, Havana, Cuba (Alli Joseph/Salon)
--

"Tall and tan, and young and lovely . . . and when she walks, it's like a samba." These are words famously sung by Brazilian chanteuse Astrud Gilberto describing Helo Pinheiro, a 17-year-old girl on Ipanema beach many years ago in the eponymous song, but in the still, 80-degree early afternoon heat on the Callejon de Hamel street in Havana, they might have been written about a boy. A young man, actually. And when he walks, it actually is a samba. His name is Jerzon, and I met him in an alleyway on New Year’s Day.

On Jan. 1, 2017, my plane landed in the Havana airport from Florida, making me a part of the immense wave of tourism that has brought income to many struggling Cubans, but primarily benefits the government that still purports to be suspicious of America, and Americans by extension. According to Cuban writer Rosa Martinez of the Havana Times, the national Cuban economy had negative growth in 2016, in spite of the influx of 4 million tourists. Warned by Cuban president Raul Castro on national television in the final days of 2016 that 2017 would be a difficult year (which, relative to the Cuban standard of living, Americans would be hard-pressed to imagine), Cubans remained stalwart. After all, in a communist nation that relies upon monthly food rations and limited salaries of about $18 USD per month, a bad year is terrible. Wrote Martinez in early January, “Nobody was frightened then. It must be because we are so used to gloomy predictions of more shortages, of having to save, of having to make more out of less, of making more of an effort and to produce more . . .”

Life in Cuba is tough, and especially so for young people like Jerzon, who I noticed standing apart from a group of tourists and Afro-Cuban dancers in the Callejon de Hammel, a famous art, poetry and religious iconography-filled skinny street near Old Havana. A 21-year-old trained dancer for the State, with a tiny waist and long, slender legs, Jerzon barely looks 17. He is elegant, with dark skin and soulful eyes. His clothing and mannerisms suggest that he is gay, as does his overly flirtatious yet non-sexual behavior with women like me, whom he meets in the Callejon. He wants to be friends, like many young people in Cuba who seek contact with people and things beyond their reach in the United States. They finger your chain-store clothing, smell your perfume, want to hold your smartphone. These are things they may never have.

On Sundays, curious visitors gather in droves to experience the traditional rhumba dance style, among others, performed by local Cuban musicians and talent. The alley-like street is lined with tiny bars and dusty art galleries, as well as crumbling homes wedged between bathtubs installed in cement walls and adorned with the poetic stanzas of Cuba’s alternative writers. If you look between the lines, and are quiet, you can see the real Cuba in the people next to you.

Jerzon eyed the weekly rhumba performance, which packed the narrow Cajellon. At first, he looked at me askance, but warmed quickly when I told him I wanted to know about his life. Conga dancing and swaying effortlessly with the music, Jerzon has a face that tells of many hardships, yet exudes a pure beauty. He has been studying dance since age 5, he tells me in Spanish, and -- he sniffs with an interesting snobbery for a person of few means -- he does not want to dance with the others, because they are “not professionals.” With a quiet reticence, Jerzon says he will be going to Istanbul to dance with the Cuban government's company, to which he belongs, in February. For a month of work, and several shows a day, they will pay him US $12. He hopes he can come to visit me in New York someday, he says, and dance there. Thinking of this, and the few glimpses he has had of America on television, like music videos by American singing stars that the government allows, Jerzon brightens perceptibly.

With squared ballet dancer shoulders, Jerzon is a survivor; this is the case for many young men and women in Cuba. An orphan, he long ago lost his mother to obesity, a rarity in a country where there is little food, and he does not know his father. Jerzon knows where his dad is, however: the Bronx. But, he says looking down, they have no contact, and the sister who also lives in New York has never come for him. Jerzon lives with and cares for his 92-year-old abuela (grandmother), who is incontinent, can barely hear and has difficulty walking. "It is hard, but she is my everything," he says. "She raised me, so I take care of her. I owe her all my life."

Jerzon’s eyes grow sad. He tells me that when it rains, their apartment begins to leak — it's one of the crumbling buildings you see all over Havana, the likes of which I stayed in during my travels. There are holes in the ceiling, and beyond the exposed concrete, you see only darkness. Jerzon is lovely, and scrappy; he seems sincere, but I am not naïve enough to think he does not find foreign ladies to enchant every day, promising to take them to special rhumba spots that his friends run.

In Havana, there is not much choice of food and people are very poor, yet no one seems to be starving. This is because everyone has a hustle — they have to. Money is scarce, as is the ability to buy much of anything beyond basic needs. Leaving the Callejon in search of more live music, it is late afternoon. Over the course of the afternoon, I step in and out of "collectivo" (shared) taxis, which Jerzon hails for us with gusto. I accompany him to a handful of "the best" spots in Havana, he says, where he clearly knows the proprietors and hopes to receive something in return — a meal, a tip, a drink. Jerzon is familiar in a way a strange American man would never be, looping his arm through mine, hugging me frequently. Part of this is the purview of Cuban people by reputation: they are often affectionate, genuine, generous with their time and whatever they have to share. The rest feels solicitous, and is Jerzon's desire to make a connection to a place out of reach.

Frequently calling out to people on the street with a hearty hello, Jerzon seems to know everyone, though Havana is a large city: dancers, restaurant owners, bartenders, fruit vendors, bakers. When I take him to dinner with a friend, his voice softens and he retreats a bit, politely eating but interrupting our conversation, so that he will be acknowledged. These interruptions are about musical artists he likes, and food. Jerzon lights up when music videos of Beyoncé and Christina Aguilera come on the TV. He is animated, moving his hands and head in sync with the music without trying.

Young people the world around are famous for striving. Like Jerzon, those caught in a multi-generational web of trade and material limitation see glimpses of what could be, if only. The 60-year U.S. trade embargo continues, and rare flashes of what might be called "needful things" (per Stephen King) to Cubans, like an iPhone or Fitbit, are gifts from foreign travelers or relatives who visit from the United States. Cuba's young people have desires, but also a true sense of their reality. The future would ordinarily be bright for such a gifted young man who must always have his wits about him, and yet here, it seems limited. The week I spent in Cuba was humbling, and highlighted the benefits and challenges of communism far more than any textbook could. Free health care and education are a plus, but the minuses are considerable.

Jerzon says several times during our day together that he longs to go to the United States, to New York, to keep studying dance. He knows that is not going to happen. And, he will never read this story about himself; Jerzon cannot read English, and can barely write. After dinner, it is time for us to part ways. Jerzon begs for me to send him a mobile phone — he reminds me that he has never had one — and can't afford it. "Por favor, dame tu número de teléfono, para estar en contacto. Para no perder el tacto." ("Please, give me your number, to stay in touch . . . to not lose touch," he pleads.) I say that I will find him again, and I mean it; the small slip of white paper he has carefully scrawled his address on in blue pen wilts in my palm, the ink touched by Havana's humidity. There is no phone number. No email. Jerzon lowers his gaze a bit, and his shoulders droop for a moment. But then, he gathers himself. "OK," he says quietly, and walks away, his carriage still upright and proud — indeed, like a samba.