The end of the world as we know it: The Donald Trump White House is set to destroy decades of U.S. foreign policy

In less than 2 weeks, Trump has unraveled decades of diplomacy, weakened alliances and made us all less safe 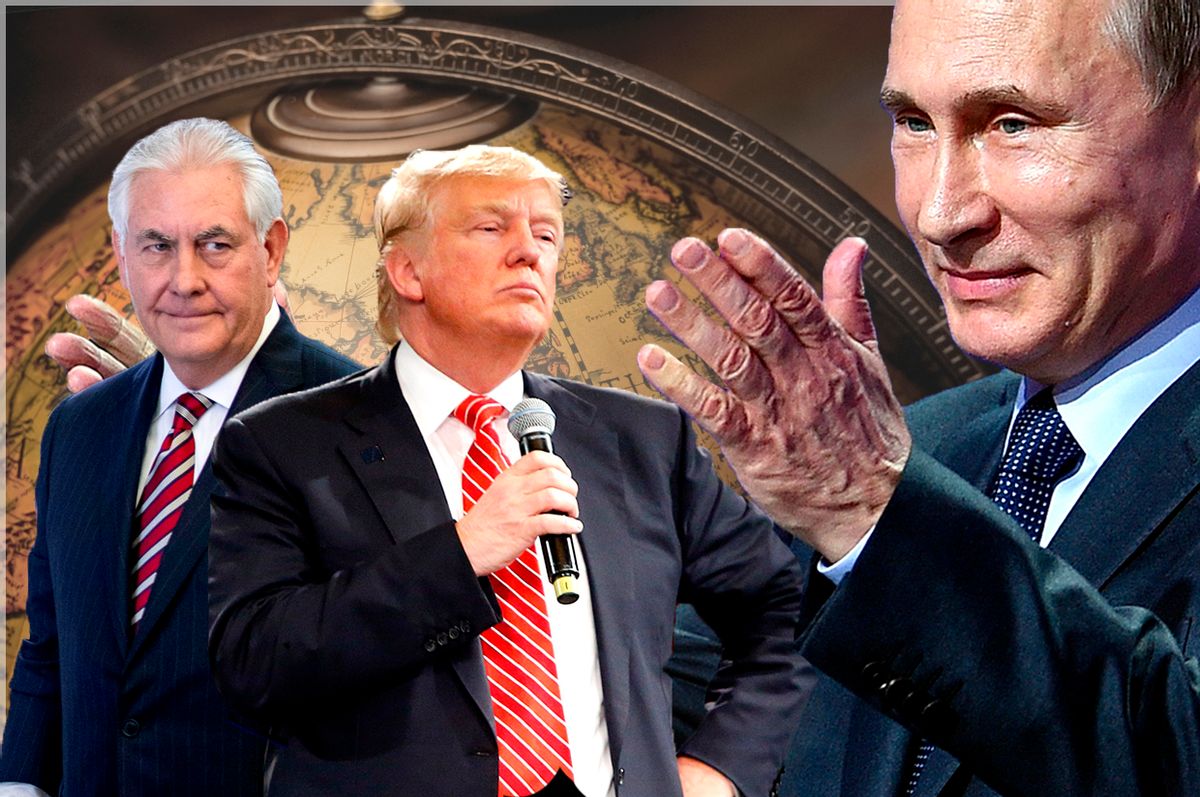 When Stephen Colbert decided to close out 2016 on “The Late Show” with a rendition of R.E.M.’s “It’s the End of the World As We Know It,” it was already getting hard to find much irony in the litany of disasters we had witnessed.

As Salon wrote about the remixed song, “From the Zika virus and Harambe to Donald Trump’s pussy-grabbing clip, Stephen Colbert hit the nail on the head in his review of 2016.” But much of the song also highlighted what 2016 had lined up for 2017: “Vitriolic, xenophobic, troll spite, Fourth Reich!” Colbert sang.

Perhaps the best irony of the adapted song was the fact that Michael Stipe stood next to Colbert on stage, mostly refusing to sing and shaking his head in disgust.

We can only imagine what his expression must look like now.

As I write this, the information about President Donald Trump’s blustering foreign policy disasters keep pouring in. And yet, in classic narcissistic style, Trump has refused to acknowledge that anything he has done thus far has created problems for the United States: “The world is in trouble, but we’re gonna straighten it out, OK? That’s what I do, I fix things,” he said at a prayer breakfast on Thursday.

Even before his inauguration, Trump was already undoing norms of diplomacy. He had a conversation with the president of Taiwan, a move that disregarded longstanding U.S. policy and annoyed China.

Trump kicked things into high gear when he issued an executive order temporarily banning travel from seven Muslim-majority countries. Before the ink was dry, the executive order had raised a series of legal questions, sparked protests around the country and led to airport detentions of people who had previously been approved to enter the United States.

Sally Yates, the acting attorney general, refused to defend the order. She was fired. Then more than 900 State Department employees signed a "dissent cable," which led press secretary Sean Spicer to say, "They should either get with the program, or they can go."

The fallout from the international community was severe. British Prime Minister Theresa May called it, "divisive and wrong." German Chancellor Angela Merkel schooled Trump on the Geneva Conventions and criticized the logic of the ban. Jean-Marc Ayrault, France's foreign minister, added to the criticism by saying Trump's order "can only worry us."

And that was just the beginning. Since then Trump put Iran "on notice" via Twitter.

The Associated Press reported that Trump warned Mexican President Enrique Peña Nieto that he was ready to send U.S. troops to stop "bad hombres down there" unless the Mexican military does more to control them. This came after Peña Nieto canceled a visit to the White House in light of Trump’s insistence that Mexico needs to pay for a wall on the southern U.S. border.

And The Washington Post reported that Trump “blasted” Australian Prime Minister Malcolm Turnbull over an Obama era refu­gee agreement and later called the pledge to accept 1,250 refugees a “dumb deal.”

Agreeing to take in 1,250 highly vetted refugees is not the same thing as accepting “thousands of illegal immigrants.” Trump may speak at a third-grade level, but he seems to have not mastered third-grade math or  “character ed.”

As The Washington Post put it, Trump’s “treatment of Turnbull was particularly striking because of the tight bond between the United States and Australia — countries that share intelligence, support one another diplomatically and have fought together in wars including in Iraq and Afghanistan.”

Which brings me to the point of this piece: Beyond surveying the absolutely mind-blowing array of diplomatic blunders that Trump has already made, we need to get a handle on what his presidency is going to do the role of the U.S. in the international order.

Two days before the inauguration, Chatham House, an independent policy institute based in London, issued a report predicting the foreign policy of Trump. Despite efforts to draw on data, existing records and a vast array of international experts, the report’s editor Xenia Wickett began with a caution: “It is worth noting that given the atypical nature of Donald Trump and his path to the presidency, the probability of unpredictable events is greater than perhaps for any president of recent memory.”

That said, Chatham House predicted some patterns that have already been proven true.

To begin with, it pointed out that Trump has no interest in supporting the “liberal international order,” a move that runs the risk of weakening or destroying long-standing alliances and associated organizations like NATO.

Trump has also shown no ability to understand why the United States invests in its allies. His constant calls to have allies “pay their fair share” fails to recognize the benefits of strong multilateral alliances. According to Chatham House, these actions "will leave . . . America’s partners . . . uncertain about US reliability.”

Chatham House also argued that Trump is best understood as a nationalist rather than an isolationist: “He is not proposing US withdrawal from the world per se, but he has a narrower interpretation of vital American interests than his predecessors did and will likely assess international engagements in more transactional terms.”

This means that the United States will only invest in international organizations, alliances and partnerships if Trump can see a direct benefit. Such a move threatens the very nature of a system of allies, since the parties support one another to protect the relationship and not only out of self-interest. This is a concept Trump apparently can’t grasp.

The third core takeaway of Chatham House was that Trump’s foreign policy favors economic benefits over security, human rights and other longstanding issues at the core of our diplomacy. Under Trump the United States may be even more willing than ever to overlook human rights abuses or invasions into sovereign territory if there is economic advantage for America (or perhaps even for Trump himself).

Chatham House argued that the move from security to “a mercantilist agenda with little appreciation for longer-term geopolitical dynamics or the continuity of the US’s relationships with key partners would mark a pivotal change, with potentially profound negative implications for international stability.”

And lastly, even before Trump had taken to Twitter to insult Australia, Mexico and Iran, Chatham House keyed into his mercurial personality: “Trump’s personality and style — brash, unpredictable, contradictory and thin-skinned — promises to have a meaningful impact on his engagement in foreign affairs.”

Trump brings more to the presidency than just a total lack of experience in international relations, failure to understand world history and an openly bigoted worldview: Mental health experts are warning that he displays signs consistent with those of a “malignant narcissist.”

Thus the transactional nature of foreign policy under Trump can’t be solely described by the fact that we have a businessman in the White House and another one, Rex Tillerson, soon to be running the State Department. While a businessman might not be able to fully grasp the benefits of cultivating international alliances and forging a balance of power, he or she does understand that completely upending the world system is bad for business.

Not so with Trump. He isn’t simply a businessman who lacks the vision of a statesman. His only long-term goal appears to be his ego.

Citizen Therapists Against Trumpism, which includes thousands of psychologists, published a manifesto warning of Trump’s dysfunction. It listed the following disturbing behaviors: “Scapegoating and banishing groups of people who are seen as threats, including immigrants and religious minorities; degrading, ridiculing, and demeaning rivals and critics; fostering a cult of the Strong Man who appeals to fear and anger; promises to solve our problems if we just trust in him; reinvents history and has little concern for truth (and) sees no need for rational persuasion.”

All of this is a terrible omen for the future of U.S. foreign policy.

In only two weeks, we already have proof that Trump can and will destroy every single diplomatic alliance that we have spent decades forging. He will disregard agreements like the Geneva Conventions and will be too quick to make military decisions that can have dire consequences.

While it would be a mistake to ignore the very real ways that former presidents, including Barack Obama, compromised world security and failed to live up to the best version of American ideals, it is fair to say that President Trump has taken us to a whole new level of threat.

We should call for Trump to have a real medical assessment of whether he is fit to serve and we can work within the system to limit his ability to cause damage, but we should also remember that one of our key battles will take place in the realm of international opinion.

Chatham House also pointed out that the Trump election accelerated declining respect for Western leadership in the minds of many international observers.