The scary implications of Trump’s Prayer Breakfast speech: Destroying the line between church and state would be terrible for LGBT people

Trump may have kept his anti-LGBT executive order sheathed, but the Johnson Amendment may now be in play 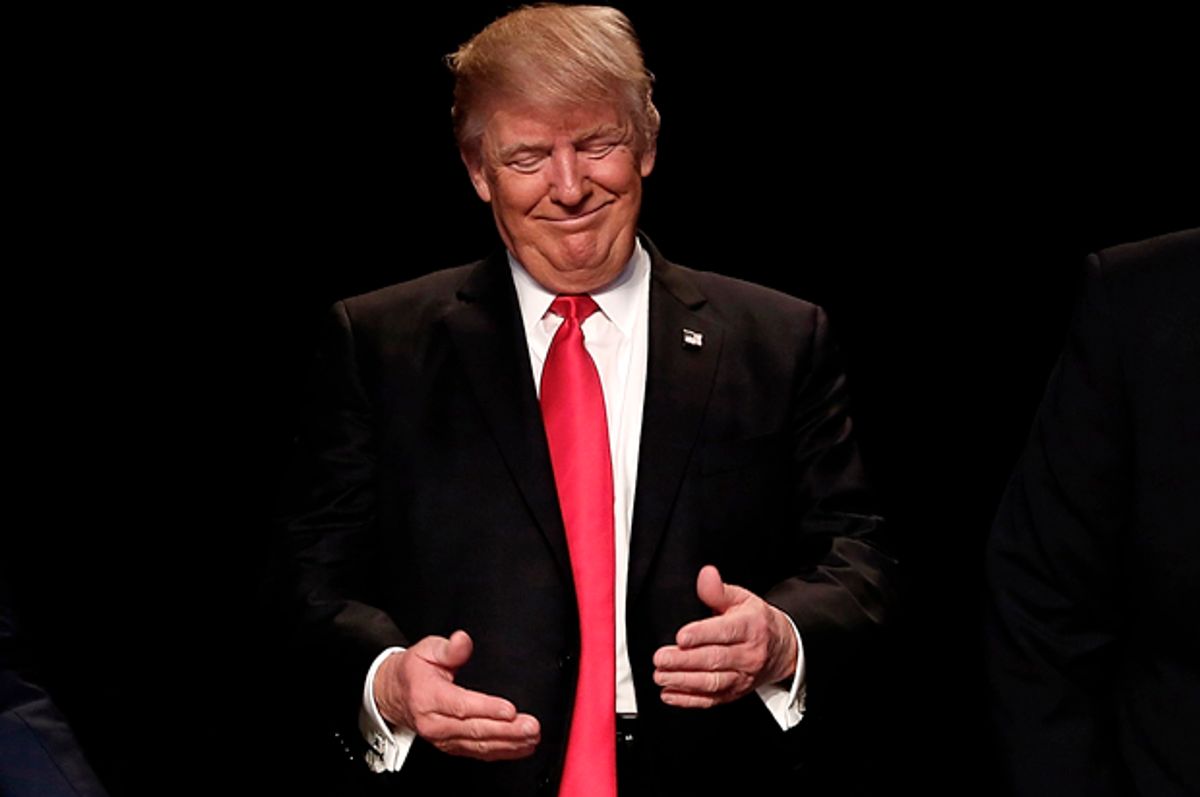 After days of speculation that Donald Trump would announce an executive order striking at the rights of the LGBT community, the POTUS was surprisingly silent on the subject at the National Prayer Breakfast. Lambda Legal, the national LGBT legal advocacy organization, speculated that Trump would announce signature of the document, which The Nation leaked earlier this week, at Thursday’s event, an annual gathering attended by every president since Dwight D. Eisenhower. Trump did not deny the existence of such an order, but his team told NBC News that introducing the anti-LGBT memorandum is “not the plan at this time.”

But what’s even more important than what Trump didn’t say is what he did say. Although the POTUS’s extremely on-brand comments about ratings for “Celebrity Apprentice” dominated the headlines, Trump used the event to outline his support for repeal of the Johnson Amendment, a 1954 law that keeps pastors from openly advocating for political candidates from the pulpit.

“It was the great Thomas Jefferson who said, the God who gave us life, gave us liberty. Jefferson asked, can the liberties of a nation be secure when we have removed a conviction that these liberties are the gift of God,” Trump said. “Among those freedoms is the right to worship according to our own beliefs. That is why I will get rid of and totally destroy the Johnson Amendment and allow our representatives of faith to speak freely and without fear of retribution. . . . Freedom of religion is a sacred right, but it is also a right under threat all around us, and the world is under serious, serious threat in so many different ways.”

The Eisenhower administration passed the Johnson Amendment with a strong bipartisan majority, facing little opposition to its signing. The law, which was introduced by President Johnson during his time as a senator, threatens to revoke the tax-exempt status of religious groups if they use church services to sway their members toward voting for a certain candidate.

In its 60 years as part of the U.S. tax code the law has rarely been enforced. Each year, a group of religious leaders celebrate “Pulpit Freedom Sunday,” where they test the law by speaking out on behalf of a favorite politician. Prior to the 2008 election, Rev. Wiley S. Drake, a pastor at First Southern Baptist Church in Buena Park, California, preached against the “un-biblical stands” of Barack Obama. According to the Washington Post, more than 2,000 faith leaders take part in the demonstration each year — with not a single prosecution from the Internal Revenue Service.

Even though there are just a handful of cases in which a religious group’s political advocacy has been challenged by the IRS, Americans widely support the law. LifeWay, a religious research organization, found that 79 percent of U.S. citizens don’t believe “pastors [should] publicly endorse political candidates during a church service.”

Still, the Johnson Amendment has been under attack in recent years by far-right conservatives who falsely claim that the law keeps them from expressing their political opinions in church.

“It prevents a whole host of nonprofit organizations, religious and otherwise, from informing their followers in ways relevant to their own duty to vote,” wrote Family Research Council president Tony Perkins in an op-ed published to the group’s website. “This ban is at odds with our own history. Since the birth of our nation, pastors and churches have been at the forefront of shaping public debate and our choice of public servants. For example, Martin Luther King Jr. was a clergyman, and the political involvement of African-American churches was integral to progress in the civil rights movement he helped lead in the 1950s and 1960s.”

That is an extremely misleading interpretation of what the Johnson Amendment does and does not do. Under the law, religious groups are allowed to discuss political issues, if not actually endorse candidates. They are also permitted to participate in politics and keep their nonprofit status, which exempts them from paying federal taxes. Current IRS guidelines stipulate that churches are allowed to spend no more than 20 percent of their operating budget on political organizing and advocacy.

Lifting those guidelines would erode the separation of church and state as we know it, allowing churches to effectively operate as America’s most powerful Super PACs.

The Church Jesus Christ of Latter-day Saints played an instrumental role in the passage of Proposition 8, a voter referendum that struck down same-sex marriage at the ballot box in 2008. The Mormon Church raised almost $20 million for the successful campaign by aggressively asking congregants to donate to the campaign, as well as giving $189,000 of its own money to the effort. In addition to sending members door to door on behalf of Prop. 8, the New York Times reported that local churches were sent a “four-paragraph decree” to be read during Sunday service arguing that “the formation of families is central to the Creator’s plan.”

The LDS Church’s impact on Prop. 8, which passed with 52 percent of the vote in liberal California, was incalculable. Lifting the Johnson Amendment would allow religious groups to apply that same political muster to, say, Trump’s reelection campaign. Exit polling from the 2016 election indicated that the current POTUS carried 58 percent of the evangelical vote.

Getting rid of the 1954 law would also allow churches to attack marginalized groups in the name of political advocacy with no recourse from the federal government. One of the few cases of a church actually having its tax exempt status revoked happened in 1994, when the Landmark Church, a nondenominational congregation located in Binghamton, New York, took out a full-page ad in USA Today warning the faithful against a Bill Clinton presidency. Entitled “Christians Beware,” it decried the former Arkansas governor’s views on homosexuality and reproductive rights.

Its unsurprising then that repealing the Amendment is a cause célèbre of Tony Perkins, an extremist far-right lobbyist who has spent decades fighting the basic rights of the LGBT community. Perkins, who advised Trump during his campaign, has advocated that the POTUS should purge the State Department of all officials in favor of LGBT equality. The Family Research Council president, who believes that homosexuality will lead to humankind’s extinction, has previously supported Uganda’s “Kill the Gays” legislation. He believes that the bill, which would have mandated the death penalty for sodomy, is designed “to uphold moral conduct.”

Notably, Perkins was also a vocal supporter of Prop. 8 — and stood by the anti-LGBT voter referendum even after it was struck down by a federal court in 2013. The Family Research Council even attempted to argue that the voters’ will was still the law of the land, despite a judge’s ruling saying otherwise.

Striking down the Johnson Amendment, which would require legislative action, would give people like Perkins, who remains as influential among religious conservatives as he is vile and bigoted, an extremely long leash to use the church’s might to continue demonizing America’s most vulnerable populations. Unfortunately, that work is already underway. The Free Speech Fairness Act, also known as HR 6195, was introduced to Congress last year. Sen. James Lankford, R-Texas, one of the bill’s co-sponsors, believes it should be perfectly legal to fire workers for being LGBT.

Trump has elected to keep the feared anti-LGBT executive order in his back pocket — for now at least. The document, if signed, would allow businesses, federal agencies, and private individuals to deny services, housing, employment and health care to queer people on the basis of religion. That opaque move is likely a power play for the POTUS, who favors a “keep you in suspense” approach designed to instill fear about what he could do to anyone in his crosshairs.

But when it comes to LGBT people, that order is far from Trump’s only nuclear option.