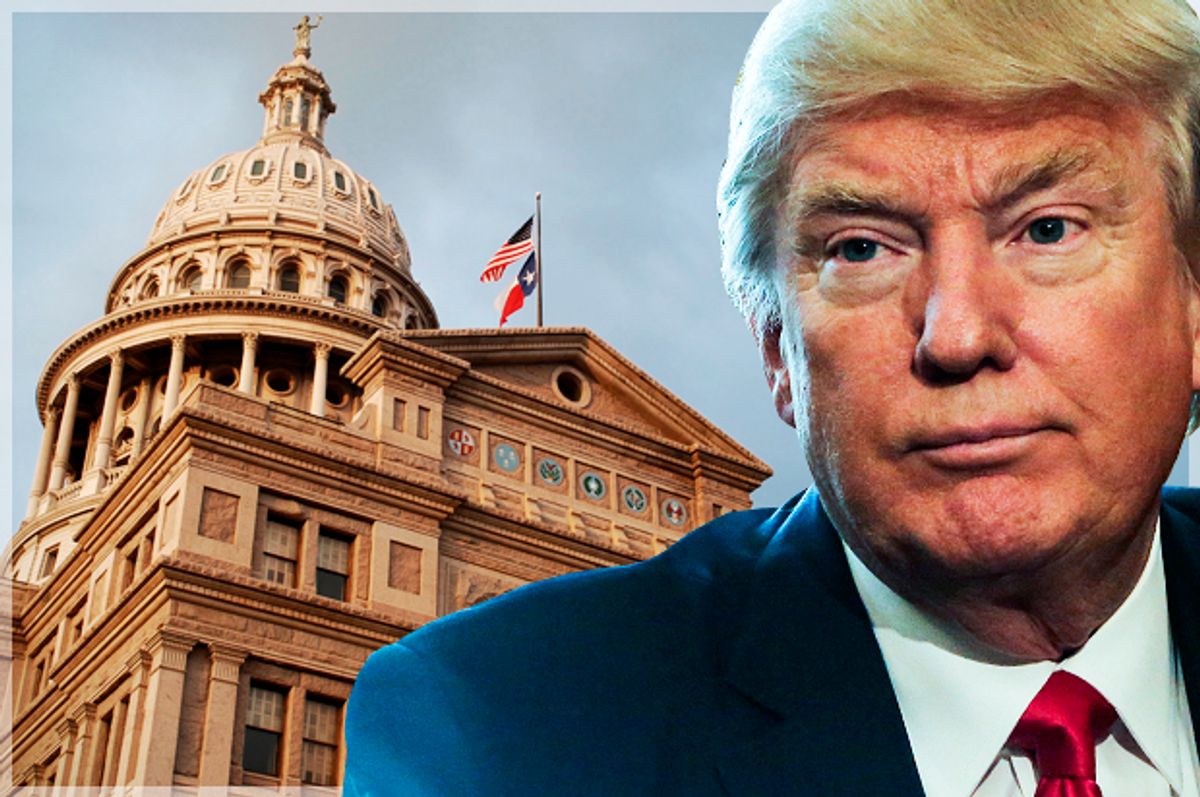 In his first week in office, Donald Trump signed an executive order threatening the funding of any municipality deemed a "sanctuary city," an umbrella term for any local government that prioritizes enforcing local criminal law over using its resources to enforce federal immigration law.

While the policies vary widely from jurisdiction to jurisdiction, the basic idea is that local police largely ignore someone's immigration status when dealing with them. For instance, if an undocumented person is pulled over for drunk driving, he is charged with that, and isn't automatically handed over to immigration authorities for deportation. In some places, if people call the police to report a crime, they are protected from inquiries about their immigration status.

The battle between sanctuary cities and anti-immigration forces that despise them is just starting to heat up on the federal level. But in Texas, perhaps predictably, things are swiftly reaching a crisis point.

In January, Sally Hernandez, the newly elected sheriff of Travis County — which encompasses most of the city of Austin — announced that the sheriff's office would be drastically reducing the amount of work it was doing on behalf of immigration officials and would instead devote its resources to enforcing criminal law.

“Under the previous detainer policy, an [undocumented] inmate who was charged with a crime was deported as soon as he posted bond, or before his court date," Hernandez said in an online video to explain the new policy. "As such, the inmate never went before a court, the victim and their family would never have their day in court, and the inmate’s criminal record would grow. This system does not foster public safety.”

In addition, the sheriff's office will leave undocumented people who are not charged with a crime alone.

“The Travis County sheriff’s office must enact policies that build public trust," Hernandez continued, "including policies that make it clear that, as local law enforcement officers, we will not interrogate or arrest someone over an unrelated federal immigration matter, if they are trying to report a crime.”

Gov. Greg Abbott, a Republican who has embraced a broad range of far-right views, retaliated against Hernandez on Wednesday by terminating more than $1 million in state grants to Travis County. He is also threatening to look for ways to remove Hernandez from office.

Abbott's vindictive attempts at payback are “more like Russian President Putin’s authoritarian regime than our democracy," Rep. Lloyd Doggett, a Democrat who represents the Austin area, said on Wednesday. "His anti-immigrant hysteria damages local law enforcement and our entire community.”

Gov. Abbott's office did not respond to a request for comment.

Abbott and his fellow anti-immigrant politicians, including President Trump, like to frame their actions on immigration as entirely an issue of public safety. But the grants that Abbott took away from Travis County were earmarked for criminal justice efforts. Given a choice between harassing immigrants and fighting crime, Abbott is clearly choosing the former.

While human rights activists make moral arguments in favor of sanctuary city policies, for law enforcement it's more of a practical issue. As Hernandez made clear in her video statement, the more resources that local law enforcement must devote to enforcing immigration law, the fewer they have for fighting crime. If undocumented people are afraid of reporting crimes or giving testimony because they are under threat of deportation, they simply won't do it.

To make things worse, the GOP-dominated Texas Senate has now stepped in. On Thursday, the state affairs committee met for a hearing on a proposed law, S.B. 4, that would block Texas cities and universities from having sanctuary policies like the ones in Travis County.

Pro-immigration protesters descended on the Texas capitol in response, with police dragging out people out from the Senate gallery for causing a disturbance. Hundreds of people lined up to testify in favor of leaving immigrants alone.

“It’s clear to us that the momentum behind protecting immigrants and their families is growing by the day," said Greisa Martinez, a Dallas resident who is the advocacy director for United We Dream. Martinez immigrated from Hidalgo, Mexico, when she was a minor and is living legally in the U.S. under the Deferred Action for Childhood Arrivals program, known as DACA.

In a phone interview, Martinez described the fight in Texas as "emblematic of the fight that is happening nationwide" and suggested that anger at reactionary forces and at Trump in particular was driving more people to rally for the cause of immigrants' rights.

“I do know that this moment feels different for us, in the way that we are no longer this marginalized community of immigrant youth," Martinez said. "We are coming into this fight with supporters from all walks of life."

"We saw that in the mass mobilization of people all across the country saying they would have our backs," she added, referring to the nationwide outburst of protests at airports, a reaction to Trump's executive order aimed at restricting the travel rights of people from seven Muslim-majority nations. (That order is now on hold, thanks to a Friday court order by a federal judge in Seattle.)

Texas politics tend to be a harbinger of whatever mischief right-wing forces are about to inflict on the rest of country, so the fight over immigrant rights in the Lone Star State is certain to have national ramifications. As the Texas governor's actions suggest, anti-immigration forces don't care if victims are denied justice, families are separated and cops are denied the resources they need to do their jobs. These right-wing activists want to stigmatize and persecute immigrants, and they are willing to sacrifice public safety to do so.