Last exit to romance: The strange alchemy of LGBTQ romance and the books that give us hope 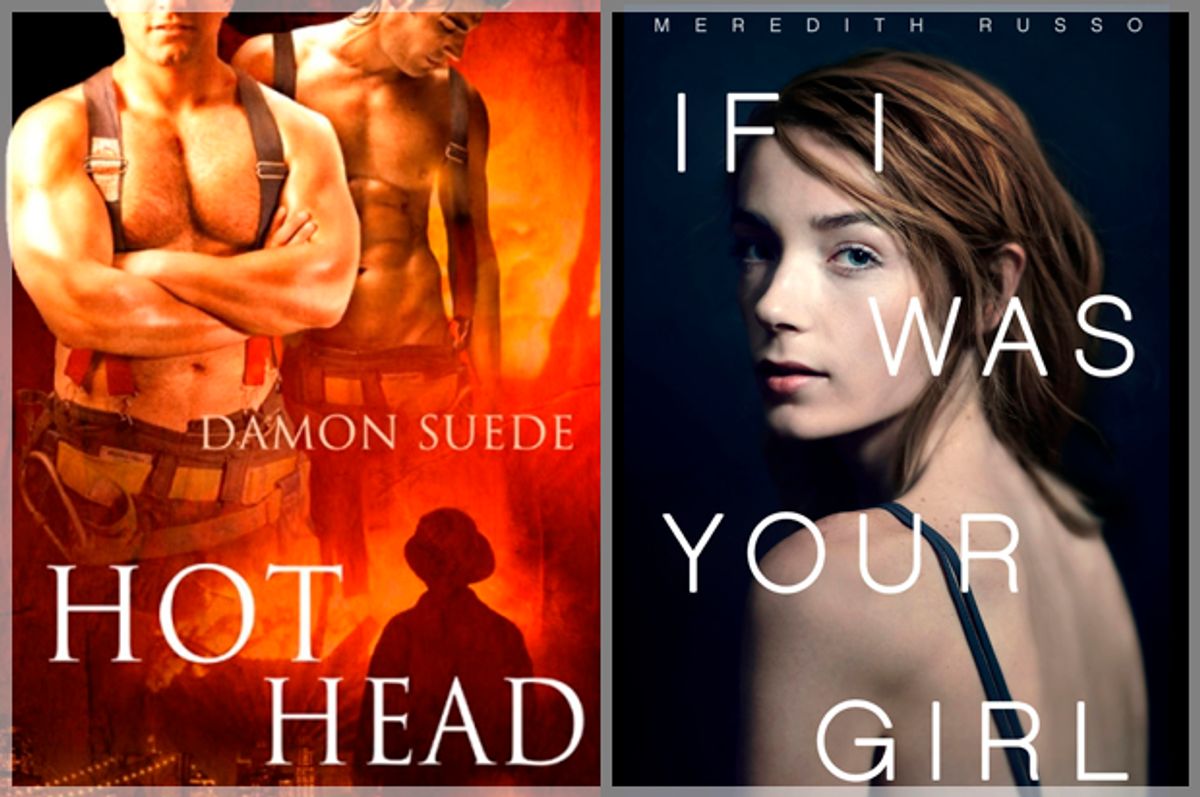 Romance author Damon Suede, holding a copy of “Last Exit to Brooklyn” in one hand and “Romance and the Erotics of Property” in the other, impatiently waits in line at Momofuku with his husband, forensic investigator and writer Geoff Symon. Geoff nods as Damon makes stabbing gestures in the air with his novel for emphasis.

“We thought Dubya was a credulous moron until the advent of the orange sock filled with fermented rat semen,” Damon bellows, as though the two of them were home alone instead of in a crowded restaurant in the East Village famous for its pork buns. From the expression on Geoff’s handsome face, blank yet slightly perturbed, the way one might appear receiving sudden news of a rent hike, you can tell that he’s heard this soliloquy before and he’s hoping it might segue into another topic, like the Sanctuary on “The Walking Dead.”

“Mary!” Damon calls, interrupting himself to wave me over, his booming voice causing several diners to startle and glance in our direction before turning back to their ramen. We take our seats at the counter by the window and Damon immediately calls the waitress over for a quadruple order of buns. Though it’s winter, he’s wearing a light blue tee-shirt of a unicorn shitting a rainbow and is slightly sweaty.

But we’re not just here for the buns. “Look, I always say, romance is the literature of hope. During the Great Depression, the only two industries that thrived were escapist entertainment and private schools because they help people crawl through the shrapnel of compromise and disappointment,” he informs the waitress. She shrugs and I order some vegan noodles.

Meanwhile, I’ve just finished Meredith Russo’s bestselling, “If I was Your Girl,” a beautifully written, YA contemporary romance in which Amanda, the trans protagonist, is both pretty and popular and goes out with a hot, nice football player. Talk about hope! This seemingly simple story has secured Russo a spot in the romance pantheon and earned her well-deserved lucre and accolades in the process. It’s a Hall of Hope win-win.

Russo herself is a trans woman from Chattanooga, Tennessee, who is a fan of genre fiction that “unfolds like a flower.” She wanted to write a book where “trans youth [could] take away that it's possible to have friends and family who protect and cherish you, a love life, and meaningful hopes and dreams for the future. I want cis youth to take away that their trans peers are human beings just like them who worry about bills and grades and love and just want to get by.”

To the uninitiated, this might not seem all that revolutionary: a romance that ends happily plus gives you all the feelz. But in the trans narrative it’s actually pretty radical. Russo hopes her book will show trans youth that life contains all through-lines, especially happy ones, regardless of the fact that when your brethren are represented in the media, they’re mostly in a state of suicidal ideation or doing sex work. Think of Georgette in “Last Exit to Brooklyn” or Brandon Teena in “Boys Don’t Cry” or Rayon in “Dallas Buyer’s Club.” They ALL DIE and they die YOUNG and BETRAYED.

Russo’s message is not to cast aspersions on any other trans experience or detract from its validity. All stories are worthy of being told and celebrated. Transgender author Toni Newman, whose book “I Rise” charts the story of her transformation from her early childhood in the South, to her years as a prostitute, to her time as a law student, says, “I was broken and poor on the streets and I had to rebuild my self-love and confidence. I could not find a job and I had lost most of my family and friends. My heart was broken and my spirit was broken but I learned how to survive and be strong and stand up for myself.” Russo, conversely, writes a Southern-fried story of acceptance that, though different from her own — she transitioned in her twenties — usually goes untold: even the Bible thumpers are nice and there’s nothing that makes a YA reader become a romance reader down the line like a nice Bible thumper, y’all.

Though perceived as a kinder, simpler era — MAGA! MAGA! — the 1950s and early 1960s marked a period of segregation, the Cold War and the Big Bad Closet. Behind the bright spackle of the baby-boomer façade, meatloaf, plastic and pot roast pervaded. This period also saw the invention of The Teenager as a subspecies in literature and film — e.g., “Rebel without a Cause” and “West Side Story”— which further hard-coded social norms into pop culture: Girls are pretty! Boys are strong! Smart people are villains with English accents! If you didn’t conform, you were seen as dangerous or just plain icky. America hid behind its white picket fence from anything extraordinary or disruptive.

As my mother would say, “No new information.” But what is new is that just beneath the bedrock of “Father Knows Best” lurked the cold, smelly leviathan of Hubert Selby Jrs’ elegiac “Last Exit to Brooklyn.” There we see the real deal: the hustling teen prostitute Tralala, who is relentlessly brutalized and gang-raped but doesn’t care, and Georgette (played by Alexis Arquette in the movie, RIP), a drug-addicted trans teen in love with a neighborhood tough who sometimes threatens to castrate her. Forget “1984” blowing up the Amazon bestseller list. The teenscape Selby depicts is the precursor to the dystopian universe of “The Hunger Games.” For Selby, the world is a bleak landscape of repressed emotion and extinguished hope. “Hunger Games” pulls this vision inside-out to create a Technicolor game show with weapons in which pretty teenagers slaughter each other so their families can eat.

In all romance subgenres, from the triple-XXX spanky-wanky to the sweetest, small-town inspirational, authors champion the idea that no matter how broken you are, no matter how bad it gets — and it gets pretty bad; see above — hope springs eternal. You get your kiss AND your sunset. This hope necessarily comes in the form of a wedding, a feast or a baby.

According to Damon Suede and Aristotle, this antidote may well save humanity from a bunch of despotic manimals hell-bent on pitting friend against friend, man against woman, straight against gay and kickstarting a civil war, not to mention a major ruckus in TSA pre-check. It’s like “Heart of Darkness,” only without the heart. Or “Streetcar” if Stanley Kowalski had been played by Steve Bannon instead of Brando. Or “Last Exit to Brooklyn” if everyone was straight, sober and owned an iPhone.

It’s as if the desperate nostalgia to resurrect the bogus, boring mid-century gender binary has eclipsed the truth behind the Ameri-curtain — that in fact women were objects and men were prisoners and Netflix hadn’t arrived to opiate the masses. Literally EVERYONE was in the closet. So why would anyone in their right mind want to go back there? A casserole fetish?

Damon signals the waiter and orders more buns. “Even though the average romance reader would rather die than read ‘Last Exit to Brooklyn,’ really all stories are romances,” Damon says. “Romance is the Ur-novel. It is the root of all narratives that wind to a satisfying, upbeat conclusion. This is why gothic romance evolves into mystery. Scientific romance mutates into sci-fi and medieval high romance takes wing as fantasy and historical. No matter how brutal, it’s all romance, even ‘Game of Thrones.’ At the end of it all, like seven gabillion pages later, Jon Snow is going to end up with Daenarys Targaryen.”

I gasp audibly, clutching the counter, the idea of the Mother of Dragons marrying Jon Snow flooding me with so much feeling that I almost eat pork for the first time since 1986 when I became a kosher vegetarian. Instead, I weep briefly into my soup. Geoff, who’s more of the strong, silent type, proffers his napkin. I wonder why I’m weeping. Is it because I’m happy the Mother of Dragons finally has a nice boyfriend or because I’m confused? If the core belief is that a life with relationships is richer than a life lived alone, how to reconcile this idea with my feminist certainty that a woman’s identity doesn’t depend on some man to complete it. Am I now Sheryl Sandberg? I put this conundrum to Damon.

He says, “A lot of people tell me that romance novels give women unrealistic expectations, and my response is always that romance doesn’t make women expect more, it teaches them not to settle for things they don’t want. Romance novels are the way that women spread the word about birth control and divorce and single motherhood and escaping abusive situations. Since romance is written by, for, and with women it has been ignored, and so it serves as a perfect intercom system over thousands of miles and years.”

The thing is, mostly women both read and write gay romance fiction, so Suede himself is somewhat like his tee-shirt: a unicorn writing a rainbow magically getting paid beaucoup bucks for it. Kinda like Meredith Russo, who also got a hefty advance. When I asked her what her next project might be, she told me she had plans for a high fantasy or maybe cyberpunk, though nothing dystopian because “it reflects [its] creator's worst, most reactionary assumptions about human beings. I don't find the idea of a world where we're not centered particularly frightening. I always read Lovecraft as the profound anxiety that humans aren't special and we live in a universe profoundly ambivalent to our existence. Maybe it has something to do with being one of the most hated minorities on the planet right now. Cthulhu doesn't scare me too much more than, say, Trump.”

A dude-bro in a red Make America Great Again cap saunters by the window and Damon observes him with the cool eye of an anthropologist or maybe a Stormtrooper. “This is one of the reasons I love serial killer novels or dystopian fiction,” he says. “When they’re written properly they have a lush tenderness in the way they acknowledge the pain and the compromise of life. It’s like we are in a boat on a sea at night and and all the misery and hunger of the world laps against the side. These books give us a way to navigate that pain, but they don’t leave it behind. They stay in it.”

“Does anyone want dessert?” Geoff says, studying the menu.

“People who write romance are the gold-medal athletes of hope,” Damon continues. “All of our energy goes to the impossible task of finding solutions where none exist and turning confrontation into aspiration. Our books are lighthouses signaling the walls are down and all hope is possible.”

His eyes are glittery and I turn away to consider a group of drunk dude-bros roughhousing on First Avenue and I wait. I wait for the Mother of Dragons.