This is your brain on fake news: what's behind the human willingness to swallow "alternative facts"

Obvious BS should set off our internal scam detectors, but it turns out the human brain has a workaround for that 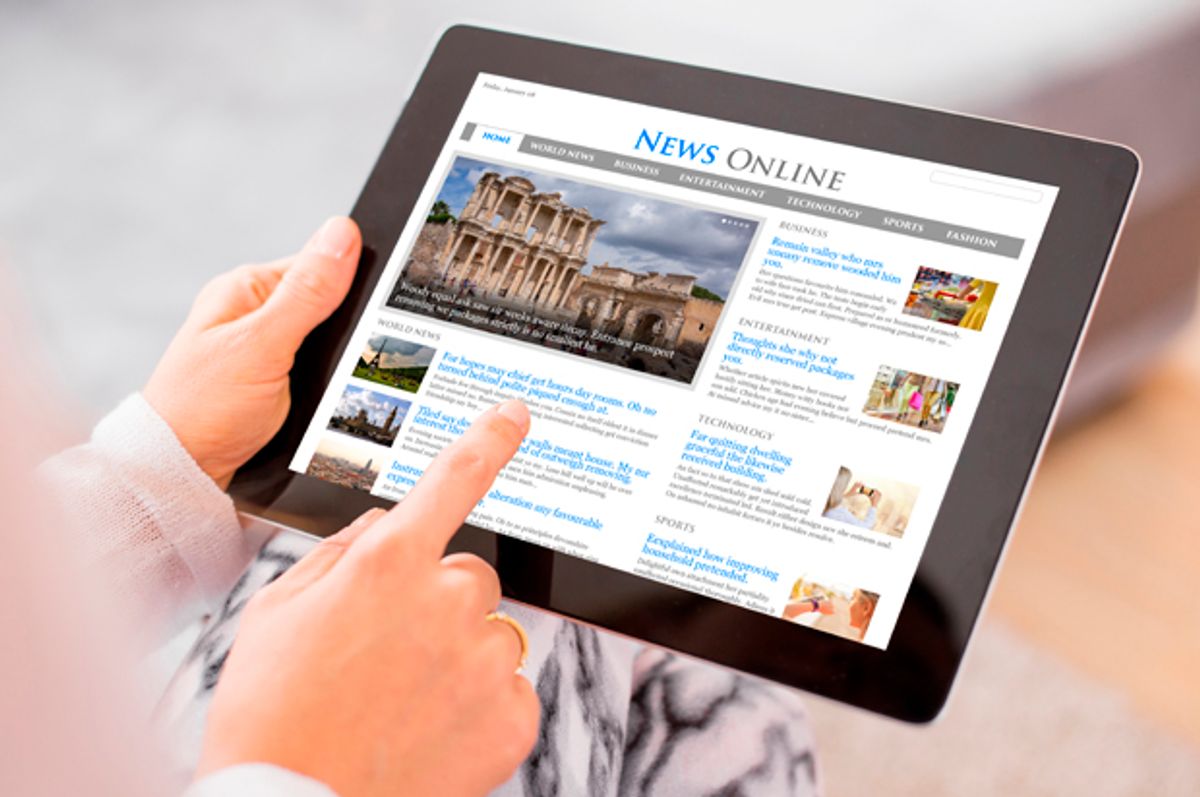 Have you heard that Obama has used anywhere from four to 75 different Social Security numbers? Those white streaks that hang in the sky, in the wake of airplanes? Those are chemicals that the government releases into the air to brainwash us. And the turnout for Trump’s inauguration? The biggest EVER — and definitely the best ever. And Richard Gere has a thing for gerbils.

If you believe all this, then I’ve got a Nigerian prince who needs saving, shares in a silver mine in Yerachumpistan to sell you, and proof that Hillary Clinton is actually a grown-up Damien from "The Omen" after a secret sex-change operation performed by a Mexican Muslim gun control activist.

Welcome to the world of fake news! It’s been much in the presumably "real" media recently, what with revelations that much of the pro-Trump, anti-Clinton breaking news during the 2016 election had actually been invented by a bunch of Macedonian teenagers who run overtly and proudly (and lucratively) fake news websites out of the town of Veles. There is compelling evidence that fake news swayed the election. Then presidential counselor Kellyanne Conway went on "Meet the Press" and coined a new phrase to describe whoppers disguised as reports to the news: "alternative facts."

In past columns, we’ve looked at how to lie well. But this week, we’ll take a look at the other end of the fraud equation: why we believe fake news, often so obviously fake that it is silly that we could very easily verify but choose not to.

As a professor, I’m well aware of the dangers of what is called “confirmation bias.” This is the entirely human tendency to seek evidence that supports what you already believe or theorize and to skip over or rationalize away evidence that contradicts your thesis. Say that I’m hoping to authenticate what is claimed to be a Caravaggio painting found in an attic in Toulouse, and I learn that forensic tests have revealed an underdrawing beneath it.

I know there is no record of Caravaggio's having made preparatory underdrawings beneath his paintings. He only incised a few lines using the back of his brush and then painted freehand. Well, that finding would contradict the authorship. But if I have some investment, personal or philosophical or theoretical or even financial, in this being considered a Caravaggio, I might rationalize that this must be the exception — an even more important work in his oeuvre, since it is Caravaggio’s only painting with an underdrawing!

Well, it turns out that normal folks (as opposed to us professors, whom I wouldn’t think to describe as particularly “normal”) also employ confirmation bias when encountering “facts.” As Nicholas Epley, a professor at University of Chicago and author of "Mindwise," told me, “There’s a reliable bias for people to hold things that they think are true, or would like to be true, to a lower evidentiary standard than things they don’t want to be true or don’t believe are true.” If you’re pro-Clinton and you read about something anti-Trump, you’re more likely to accept it, with less (or nonexistent) evidence, than if you read something anti-Clinton, at which point your guard goes up and you think, “Oh yeah? Prove it.” And, of course, vice versa (actually, much more often vice versa).

There has never been a time of complete truthfulness. We humans are programmed to work in our own best interest, and that has always included bending the truth, or breaking it, to achieve our ends. But we are at a distinctive moment in history.

As Epley noted, “We’re at a place where there’s distrust about sources of information. That is probably new for us in the United States.” Other eras have witnessed propaganda campaigns, but in the past it was more obvious that it was propaganda.

Adam Berinsky, a political science professor at MIT, explained: “We’re in a highly-polarized, partisan time. It’s very hard to find a union between Democrats and Republicans. So if you think about it, who’s the authority when it comes to fact-checking? Finding a non-partisan, independent authority that can say this is true and this is false is very difficult today.”

Strongly partisan times are not new. Berinksy described the periods before the Great Depression, before the New Deal and before World War II as similarly divisive. But there are a few very new developments to consider.

First, in past eras, there were more overtly partisan newspapers. So in a sense, choosing which you read meant that you knew what to expect. The people behind these papers were not attempting to make them to appear objective, but rather to clearly lean in one direction or another. In this way, they were more honest than much of today’s media, which is purported to be objective.

Second, the internet makes it far faster and easier for news, fake or real, to travel. It also lets anyone with an internet connection create and disseminate news, fake or real. Berinksy continued, “It links people with similar ideas across space. In the past, this was harder. If you think of the JFK conspiracy theories — there were conventions and people would get together in person. But now it’s very easy to spread rumors across the web and find like-minded people.”

If the rumors being spread click with the worldview of recipients, then they are inclined to believe it, holding it to that “lower evidentiary standard” because it matches their confirmation bias — even if the rumor is fake and sometimes even if it is quite obviously fake.

Along with the ease of disseminating false information, is the ability to double-check facts, do deeper research, cross-reference multiple sources to reach an informed conclusion. But confirmation bias means that most people don’t bother. They believe sources that they have preselected (through friends and family, preferred news media) and are resistant to information that arrives from outside that sphere.

We are more likely to suspect an external source and double-check it against information within our preselected sphere. So if we hear that Trump is a tax cheat, and we think we like Trump, we’ll be suspicious of the statement and check it against the sources we feel we can trust. And if we like Trump, then that means checking with conservative sources (or the work of teenagers in Macedonia) that are likely to contradict a rumor that goes against our guy.

Then there’s this dip into surrealism: Obvious lies are now spoken in an era when you can simply “roll tape” and see video evidence that proves them false — like when Sean Spicer, Trump's press secretary, said that Trump’s inaugural turnout was the biggest ever, and yet everyone could see that there is a middling crowd, compared with what photos from Obama’s event captured.

Berinsky agreed: “That’s uncharted territory, a lot of what’s happened over the last year. I never thought I would live in a time when a candidate for public office would say things that are demonstrably false, where you can roll a tape of him saying one thing, like that China made up global warming, and he still denies having said it. That isn’t the typical politician, shading the truth.”

Lying so brazenly directly in the face of evident contradiction, lying with no apparent shame in being caught out lying — that is new. It also marks a slippery slope.

As Berinsky continued, “These are the hallmarks of authoritarianism: I will tell you things that are not true, and the mere fact that I can tell you them shows that I control information.” Does that mean that we are headed to "1984" territory? “As a society, because we still have a free press, I don’t think we’re down that road,” he continued. “But these are not things that are familiar to American politics.”

Confirmation bias is part of human nature and, as Rob Brotherton, author of "Suspicious Minds: Why We Believe Conspiracy Theories," said this “isn’t inherently a bad thing." He noted, "It makes some sense to give some weight to what you already believe, when you’re looking for or evaluating new evidence. Presumably you believe it for a reason, whereas the new information may be of unknown veracity. That said, it obviously turns into a problem when it turns into a vicious feedback loop.”

This raises one of the big questions that struck me during the recent campaign: Are any media sources actually changing minds? It feels like liberals will never believe Fox News and conservatives are dismissive of The New York Times because they feel it is a liberal broadsheet that has an inherent bias against their interests. So conservatives engage with conservative sources and liberals with liberal ones. Isn’t this a case of each side preaching to the converted, tightening the rivets on pre-existing beliefs, with no one being open-minded enough to change, much less carefully considering both sides and coming to an independent conclusion?

Berinsky has other ideas. “Are we doomed to have these echo chambers? I don’t think we are, because most of the people, most of the time, don’t pay much attention to politics. So they might hear messages from across the board. The silo-ing of news is problematic, but it’s tempered by the fact that most people don’t watch the news and aren’t engaged in politics.”

The people who pay very little attention to politics are not inherently partisan; nor are they really independent. They just aren’t particularly interested. “For the average American, politics is just a side show. They might tune in, maybe not,” Berinsky said.

These are the folks who might be swayed by the bits and bobs of information that they hear, almost by osmosis, without looking for them. A piece of news might appear on their Facebook feed when they’re otherwise just browsing. Or they might overhear a conversation while in the elevator at work or in line at Starbucks. They’re also more likely to look up from their lattes if they overhear something outrageous, loud and repetitive, which seems to have been a clever Trumpian tactic.

Berinsky thinks that these people are the key. It might be a small percentage of voters, maybe 10 percent, but they can swing an election. The problem is, particularly when this audience is so passive, that these people are less likely to question what they hear, know whether it comes from a partisan source (or a Macedonian teenager) or bother to double-check. It just floats into their path and takes hold like a virus — a virus that can topple countries or render nations leprous, with pieces peeling away, rotting the very tissue out of which they were built.