Trump's uninhabitable world: The EPA starts to remove Obama-era information from its site 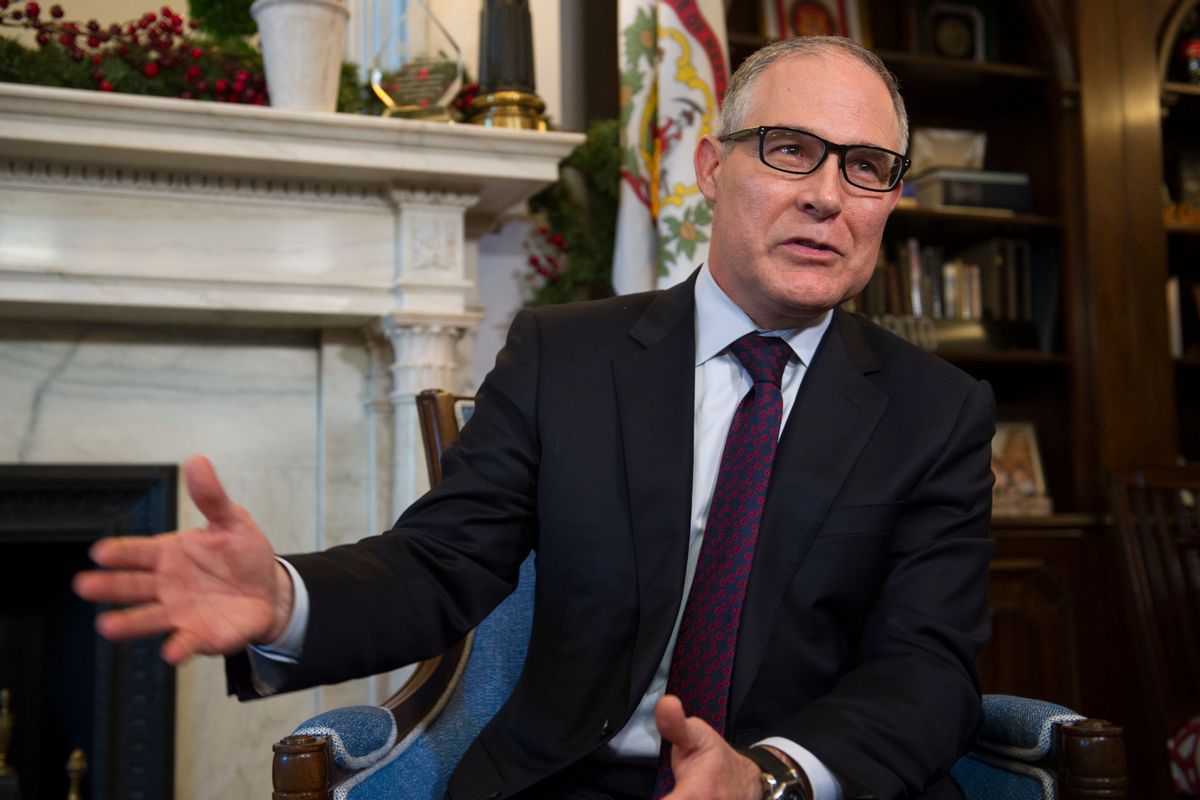 The Environmental Protection Agency’s website has begun to transform under the Trump administration.

A group of researchers have found what are likely the first steps in a major overhaul of a site that’s been closely watched since President Trump’s inauguration on Jan. 20. Federal climate plans created under former President Barack Obama, tribal assistance programs and references to international cooperation have been stricken from the site.

A mention of carbon pollution as a cause of climate change has also been removed and adaptation has been emphasized, indicating an attempt to separate the cause of climate change from the response. Some of the changes — like removing mentions to programs and task forces that have run their course as well as broken links — are housekeeping, according to an agency statement.

There have been extensive revisions made to the EPA's climate collaboration page, including removing language about carbon pollution.[/caption]

Putting the web page changes together with Trump's statements dismissing climate change gives a clearer picture of his vision of "America First." It likely signals that the United States will be stepping back from addressing global climate change. And by removing the information, it could give Trump and Scott Pruitt, his nominee to head the EPA, more leeway to decimate funding for programs they see as incompatible with “America First.”

“If the public is unaware of partnerships depending on the EPA, it may be easier to shrink the EPA without raising as much concern,” said Gretchen Gehrke, a data quality manager at Public Lab and a member of the Environmental Data and Governance Initiative (EDGI).

The changes were shared exclusively with Climate Central by EDGI, a group of scientists tracking federal websites and data. They first noticed the changes on Jan. 22 on a page formerly called “Federal Partner Collaboration,” but now dubbed “EPA Adaptation Collaboration.” Researchers spotted further changes on Jan. 26 to climate and water and international cooperation pages. All the pages are subpages of the EPA’s climate change page.

Obama’s legacy is being wiped away

One common theme running through the alterations is removing references to Obama-era projects such as the Climate Action Plan and other federal roadmaps to address climate change. The international partnership page also lost a paragraph affirming the U.S. commitment to the United Nations climate negotiations.

“They’re mostly scrubbing it of anything that has a hint of Obama,” said Gretchen Goldman, the research director for the Center for Science and Democracy at the Union of Concerned Scientists. “The United Nations stuff being removed is also maybe not surprising but definitely not positive.”

Trump campaigned on a promise to revoke much of Obama’s legacy, including on climate change. He’s made good on that promise at the EPA by nominating Pruitt to head the agency. Pruitt dogged the EPA with lawsuits as Oklahoma’s attorney general and has generally sided with oil and gas interests against environmental protections. Erasing mentions of Obama’s executive orders is another move, albeit one that’s a fairly common practice when the presidency changes hands.

“I am actually surprised to say that none of this strikes me as particularly egregious, but perhaps that is because my expectations are so low,” said Jessica Wentz, a fellow at the Sabin Center for Climate Change Law.

An EPA spokesperson said that all the changes were routine and in line with agency guidelines.

Mentions of local commitments and partnerships have been scaled back

The EPA could also be heading toward a pull back from supporting U.S. communities, including some of the poorest in the country. The updated partners page has removed mentions of the Tribal Environmental General Assistance Program.

That program provided $65.5 million to tribes across America in 2016 to help increase their ability to prepare for and adapt to climate and other environmental changes. The program requested $96.4 million in the 2017 budget to expand its scope of work.

A tribal assistance program has been removed from the EPA's page on climate collaboration.[/caption]

While the program still has a standalone web page as well as pages on regional EPA office websites, its disappearance from the partnerships page raises some warning flags about the future of the program.

“I am very concerned about tribal rights under the new administration, and would keenly watch information regarding federal-tribal partnerships,” Gehrke said.

The new web page also includes language that “some” state, local and tribal activities are supported by the EPA, further opening the door to cut back funding and partnership activities.

“That combined with what they’ve already said about scrutinizing grants and contracts doesn’t look good,” Goldman said. “It sends a signal to EPA partners to be on high alert.”

International commitments could be in jeopardy

The EPA site is also missing mentions of the United Nations and the Organization for Economic Cooperation and Development. That includes a paragraph on the EPA’s international partnerships page stating that the United States is committed to the international community through the U.N. climate talks.

Language on the EPA's international climate partnership page has removed introductory text about the U.S. commitment to the United Nations climate talk process.[/caption]

The changes follow a pattern seen on the State Department’s website. After the inauguration, a handful of pages on the U.S. commitment to international climate talks and funds were removed.

Trump has pledged to withdraw from the Paris Agreement and has taken a transactional view of international relations. That could lead to reduced funding for climate efforts in developing countries in particular.

Recently leaked documents published by BuzzFeed News show newly minted Secretary of State Rex Tillerson is even less committed to the Paris Agreement than his on-camera testimony would bely, further underscoring the possibility of the United States stepping back from a burgeoning leadership role on climate.

Climate change is being disassociated from carbon pollution

In the process of removing a mention of Obama’s Climate Action Plan, the partnerships page also no longer mentions carbon pollution as a cause of climate change. Removing the commitment to the U.N. process also came with removing a statement linking greenhouse gas emissions to climate change.

Coupled with new language framing climate change as an adaptation issue, the early changes show that the EPA could continue its climate work but with less of a focus on reining in the underlying cause of climate change.

That’s underscored by a report from InsideEPA, an online news service that monitors the agency, showing that the Trump administration could soon start to remove what it’s deemed as “propaganda” from the EPA site. Given Pruitt’s dim views on the link between climate change and carbon pollution, it’s likely that those references will be in jeopardy.

“Highlighting adaptation is good for us in terms of food security, and even national security, but not coupled with a de-emphasis on our responsibility to reduce greenhouse gas emissions and do everything we can to mitigate the potential change,” Gehrke said.

Gehrke and her group will continue to monitor the EPA website as well as other federal climate sites. She said that EDGI monitors around 25,000 web pages across the government using proprietary software that allows them to track changes to the language and code. As more political appointees start their terms at the EPA and other agencies, there will likely be a lot more to monitor for clues about what comes next for climate policy.